it would be interesting to see if had this system had work
in that case E-mail service would in 1980s and 1990s more like the French Minitel system http://en.wikipedia.org/wiki/Minitel 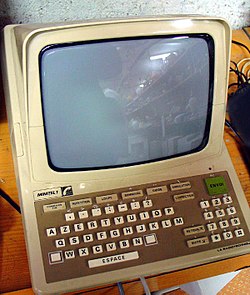 Thanks for that post and for reminding me to the pre-internet era. A similar system was
available in Germany, too, from 1984 onwards, called BTX ("Bildschirmtext" = screentext),
but wasn't really succesful and had gathered not more than 150,000 customers until 1989.
Reason probably were, that the terminals weren't that heavily subsidzied. But besides special
terminals (as shown) use of TV-screens and IR-keyboards was possible.