The local hobby shop gave me a bunch of late '50s/early '60s Air Progress magazines. The 1957/58 Annual has the attached image with a caption about the US Army making an off the drawing board purchase of 5 for evaluation purposes. The tail feathers obviously made a significant change before first flight....

In the 1954 concept, the DHC-4 tail looked rather like a squat version of the DHC-3 tail. Attached is a poor quality scan (sorry, source now forgotten) of a later DHC-4 model being tested.

The original caption claimed that this was testing a "flattened V-tail". It seems more likely that deHavilland was testing the twin-tailed configuration in Mark's 3-view but without the endplates fitted.

BTW: on Caribou tails, for a while, the short-nosed prototype CF-KTK-X carried a dorsal fin (up to just in front of the horizontal tails).

Extensive model tests were made as the Caribou's fuselage had to be angled sharply upwards to give adequate truck loading clearance, and included a large-scale model tested in flight mounted above the Otter RCAF 3667.
The prototype, CF-KTK-X, was first flown on 30 July, 1958, at Downsview by George Neal and David Charles Fairbanks, with flight engineer H. Brinkman. It was found that to obtain the required range of centre of gravity movement, a 45 in (1.14m) section had to be inserted in the forward fuselage. All subsequent DHC 4s had this built in and the prototype was later modified. Also it was found that an oscillating vortex was created off the rounded edges of the rear fuselage, causing a slight weaving of the aircraft. Initially a dorsal fin was fitted but was not effective. Then strakes were added along the lower edges of the fuselage and these created a stable vortex and the weaving disappeared. It was the solving of this stability problem that resulted in the sharp lower fuselage corners of the DHC 4 development, the DHC-5.
[...]
An improved DHC 4A version was planned, with two General Electric J-85-GE-7 jet engines with adjustable nozzles, mounted in the rear fuselage as tested in the experimental STOL Otter which would give enhanced STOL capabilities. This version was not built as priority was given to the Caribou II which became the DHC-5 Buffalo. It was then planned to make a version of the DHC-5 with these jet engines installed but this was never done owing to the restrictions placed on the US Army for operating fixed wing aircraft.
Click to expand...

We must merge those two topics;


this one and that one;

Which sadly it never did.

The DHC-4 was hobbled in the market by the fact that it couldn't haul much more payload than a cheap-as-stones C-47, much of this being due to the selection of the R-2000 engines which were out-bored R-1830s.

Was browsing through a run of a U.S. magazine titled Flight recently and came across an article in the April 1957 issue announcing the DHC-4 Caribou, but w/a drawing and 3-view showing twin tails. The 3-view is dated 21 January 1957, revised on 23 February 1957, and it gives the span of the tail as 37 feet. News to anyone?

Done, thanks for the clue !
C

Yes, by all means - I hadn't thought to do a search before posting. Sorry 'bout that.

Clioman said:
Yes, by all means - I hadn't thought to do a search before posting. Sorry 'bout that.
Click to expand...

I just came across the following in relation to the De Havilland Canada DHC-4 Caribou:

“The US Army developed fuel bladders, in the form of rubber cylinders that looked like very fat tires, that could stow 1,326 liters (350 US gallons) each. Up to three could be hauled in the cargo bay, primarily to increase range for ferry flights, but also potentially for delivery of fuel to forward areas. There was also an experiment with using the Caribou as an inflight refueling tanker, but it appears this was never done operationally.”
Click to expand...

Does anyone have any further information pertaining to this experimentation – dates, photos/drawings etc.....
Also, was it a US Army or De Havilland Canada experiment?

Should this thread now be moved & merged with this one?

Yes, indeed ! Thanks for the clue !
M

One of his stories of his life in a Caribou squadron(he never did tell me which one), was that one day, the guys decided to see if they could turn the 'Bou into a tactical transport, one that could soften up the airfield, if they are coming under fire. So, after mounting a couple pair of 50s up by the pilot(two on each side with a swivel stick so the pilot could strafe), there being hardpoints in the wings, proceeded to mount a missile(Tiny Tim, I think, although a cruel and heartless sadist named "Age" has caused that to emit haze) and some napalm tanks, and proceeded to demonstrate in front brass, which, unfortunately included a couple Air Force generals, who were none too pleased with this.

Over the years, I lost touch with my uncle until it was too late, and multiple internet searches have come up fruitless, so, any truth to that, or was it a beloved elder relative spinning tales to impress a nephew?
F

For some basic info on Caribou turboprop conversion projects 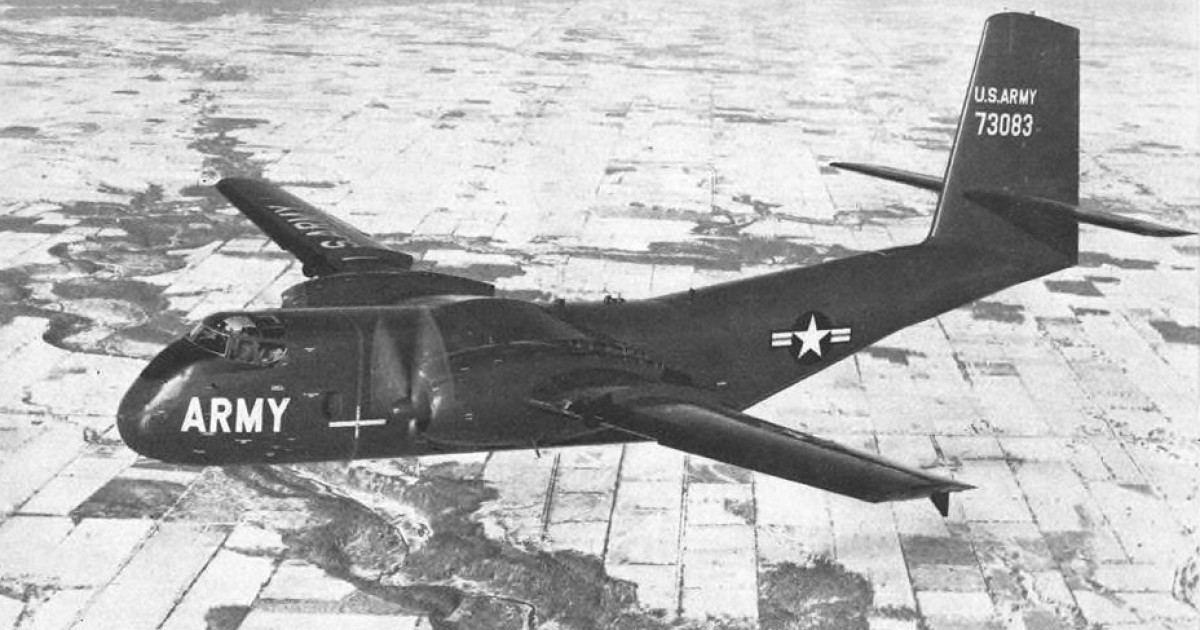