Transformer TX is currently in “Phase 3,” of the development process. This means that Lockheed Martin is now finalizing the design before manufacturing a working prototype.
Click to expand...

Some newer pictures now show the cargo pod as a somewhat flattened teardrop shape, with tricycle landing wheels (more like two small wheels and a castering nose roller), with the tail cone splitting into left/right doors. A bit of a change from the previous concepts that how a drop down ramp style tail on the pod. If the wheels are motorized, the cargo pods can move themselves to/from a landing pad to a logistics point like a low end UGV.

This generic cargo lifter concept Transformer is morphing into has interesting implications. Imagine a small gunship pod, that can double as a fixed automated sensor/sentry gun emplacement for securing an LZ (or roving if you make it a low end driving or crawling UCGV). While you may not have a 1-to-1 ratio of TX to ground assets, it does potentially give a lightly armed group organic 3D movement capability to leapfrog the enemy with local overwatch by a patrolling TX gunship. While this only really works well with payloads that have a centralized roof point to grab onto, it certainly could lead the way to larger lifters with robot arm like attachments at four corners to grab vehicles that can't do a central roof grab point. Which would mean designing a common mechanical grab interface/mount for armored vehicles that is easier to deal with than conventional lifting eyes/loops. Though considering the evolution of fighting vehicles and UGV/UCGV's, perhaps this ultimately is mostly limited to smaller fighting UCGV carriage and deployment?

U.S. military experience has shown that rugged terrain and threats such as ambushes and Improvised Explosive Devices (IEDs) can make ground-based transportation to and from the front lines a dangerous challenge. Combat outposts require on average 100,000 pounds of material a week, and high elevation and impassable mountain roads often restrict access. Helicopters are one solution, but the supply of available helicopters can’t meet the demand for their services, which cover diverse operational needs including resupply, tactical insertion and extraction, and casualty evacuation.

ARES would center on a VTOL flight module designed to operate as an unmanned aerial vehicle (UAV) capable of transporting a variety of payloads. The flight module would have its own power system, fuel, digital flight controls and remote command-and-control interfaces. Twin tilting ducted fans would provide efficient hovering and landing capabilities in a compact configuration, with rapid conversion to high-speed cruise flight similar to small aircraft. The system could use landing zones half the size typically needed by similarly sized helicopters, enabling it to land in rugged terrain and aboard ships.

It is envisioned that the flight module would travel between its home base and field operations to deliver and retrieve several different types of detachable mission modules, each designed for a specific purpose—cargo pickup and delivery, casualty extraction or airborne intelligence, surveillance, and reconnaissance (ISR) capabilities, for instance. The flight module would have a useful load capability of up to 3,000 pounds, more than 40 percent the takeoff gross weight of the aircraft.

Units could direct the flight modules using apps on their mobile phones or ruggedized tablets. Initially, the system would be unmanned, with a future path towards semi-autonomous flight systems and user interfaces for optionally manned/controlled flight.

ARES is currently in its third and final phase. Lockheed Martin Skunk Works ® is the lead vehicle design and system integration performer for Phase 3 of the program.
Click to expand...

T-X was supposed to be a flying car. Once again DARPA realized it had unrealistic requirements and morphed the program into something much less ambitious. There is some value in going down a blind alley, but i wish they'd get the requirements right the first time. Anyway, this looks reasonably useful too.

AeroFranz said:
T-X was supposed to be a flying car. Once again DARPA realized it had unrealistic requirements and morphed the program into something much less ambitious. There is some value in going down a blind alley, but i wish they'd get the requirements right the first time. Anyway, this looks reasonably useful too.
Click to expand...

Problem for DARPA is that they don't get to write requirements. Sadly many (most?) of their efforts get shelved because it bends ricebowls and threatens pet projects.

Can you elaborate, please? This is of particular interest to me. I thought the definition of requirements was up to the DARPA PMs, who have four years' worth of time in their tours to find a couple of projects to sponsor and ideally transition (in which case they're allowed to stay longer).
It is true that a relatively small fraction of the programs started gets to Phase III, much less transition. In most cases, the technical goals are deemed so unachievable that they either get drastically reduced in scope (VULTURE, T-X,...), or cancelled.

I agree with the basic concept of ARES. (flight module+detachable mission modules)

"...The thick center section houses two helicopter turboshafts that drive the fans mechanically via a combined gearbox and cross-shaft. Flight control is provided by the constant-speed, variable-pitch fans and movable vanes in the duct exhausts. A control surface at the trailing edge of the center section provides long-term steady-state pitch trim, says Renshaw.

The original Transformer requirements for a roadable aircraft limited the size of the flight module to 8.5 ft. wide and 30 ft. long when stowed on top of the vehicle in ground mode. The full-size ARES prototype will be the same size, with a span of 42 ft. with the wings unfolded. The ducts are 8.5 ft. in diameter, enclosing 7.5-ft.-dia. fans.
While a cargo UAV seems much less “Darpa hard” than a flying car, Renshaw says, the challenge is in developing the control system, in which the same effectors produce different results in vertical, transition and forward flight. In the hover, the duct vanes provide yaw control; in forward flight they provide pitch and roll.
The ARES fly-by-wire system employs the “dynamic inversion” control-law technique used on the short-takeoff-and-vertical-landing F-35B Joint Strike Fighter to blend vertical and forward flight control. “The pilot commands up, down, left or right and the flight-control system works it out,” he says.
Wind-tunnel tests to collect data on control effectiveness were conducted last October on a 1/3-scale half-span model of the flight module, with tilting duct, electrically driven fan and variable-pitch blades. “We pick up significant lift on the duct from air being pulled through by the fan,” Renshaw says. “We are still tweaking the duct design and will continue to use the model in the wind tunnel to tune the flight controls.”
The ARES prototype will be completed this year for initial ground tests at Piasecki early in 2015. “We will use the flight vehicle as a test stand,” he says. Flight tests on a government range are planned to begin in June/July 2015. For its graduation demo, the vehicle will take off vertically with payload pod attached, fly to another location, land vertically, disconnect the payload and fly back as just the flight module.
Advantages of a ducted-fan configuration over an unmanned helicopter like the K-Max include its compactness, performance and modularity, Renshaw says. The ARES can use smaller landing areas, while the ducts protect the vehicle and personnel. Speed ranges from 130-150 kt. for best fuel efficiency to a maximum of about 200 kt. “It's faster than a conventional helicopter with a sling load, which is the correct comparison,” he says. An operational vehicle would have a gross weight in the 7,000-lb. class, about half of which would be available as payload. As an alternative to a cargo pod, the vehicle could carry an intelligence, surveillance and reconnaissance payload, a special-operations dune buggy or even a casualty-evacuation module..."
R

I wonder which contractor will build the Spice harvesters?

...Indeed, Piasecki received a patent for an ARES-like air vehicle in 2011. It features an “air module” with a wing, tilting ducted fans, engines, drive system and a load-carrying structure to support the payload...
Click to expand...

The corresponding Piasecki Patent: Modular and morphable air vehicle US 20110315806 A1

EDIT: Extract from the Patent

Running a little behind but not terribly so

"Following extensive component, integrated system and ground testing of the ARES aircraft, DARPA and the USMC have decided to end further investment in the programme due to significant cost growth and delays,”

VTOLicious said:
...due to significant cost growth and delays,”
Click to expand...

Not necessarily in the ARES program itself it should be noted.
J

LSIs nor the USG seek to solve the "VTOL wheel of shame", which must be accomplished first. Google, Uber etc seem not to be on track to solve the wheel either so efficient VTOL remains elusive to mankind. Conventional Duct fans regardless of how they are powered are not the answer.

It's epedemic. DARPA X-VTOL (Lightning Strike)was cancelled before its first flight as well. Wondering what will happen with TERN https://www.secretprojects.co.uk/th...econnaissance-node-tern-uas.26369/post-349476

In the case of the ARES however, it's more a question of the F-35 & CH-53K programs eating the Marine Air budget, which in turn is devouring the USMC budget in general.
J

jsport said:
LSIs nor the USG seek to solve the "VTOL wheel of shame", which must be accomplished first. Google, Uber etc seem not to be on track to solve the wheel either so efficient VTOL remains elusive to mankind. Conventional Duct fans regardless of how they are powered are not the answer.
Click to expand...

power necesssary to lift ratio needs to be solved first. Helicopters, jets thrusts, duct fans are not beyond shameful yet.

I suspect that the technical issues were not insurmountable. Budget, as Grey Havoc alludes to, is most likely the real reason. The Army has recently gone through "night courts" were many an ongoing program died or was severely reduced by the Chief of Staff or the Army (now Chairman of the Joint Chiefs) and the Secretary of the Army (now Secretary of Defense). I suspect the other services will soon be holding "night courts" as well.
The problem with DARPA tactical efforts is that it is very difficult to transition them to program of record. Either there is no requirement (Congress does not like to write checks without one), or the need to compete the capability is problematic given that the technology maturity usually rest in the hands of one vendor. This leads to long federal court battles and that cost time and money.
J

Technologies w/ increases of 30% in VTOL thrust over current lift structures were tested in the 50s.
The now defunct DSTAR AVX fans offered multiple advantages over geared thrust fans where the thrust was direct in the fan blade.
Alternative safer and cooler propellants continue develpoment but noone is looking. Engines could weigh less than 10lbs.
When is there to be a transoceanic aircraft w/ VTOL?

DARPA transition is non existant
Services requiresments for VTOL vehicles. Not even worth addressing. The better it looks the more the brass get a hard on. jokish, These developmental craft being proposed will not be able to carry the necessary loads, at the required ranges, w/ the defensive an offensive armaments necessary. 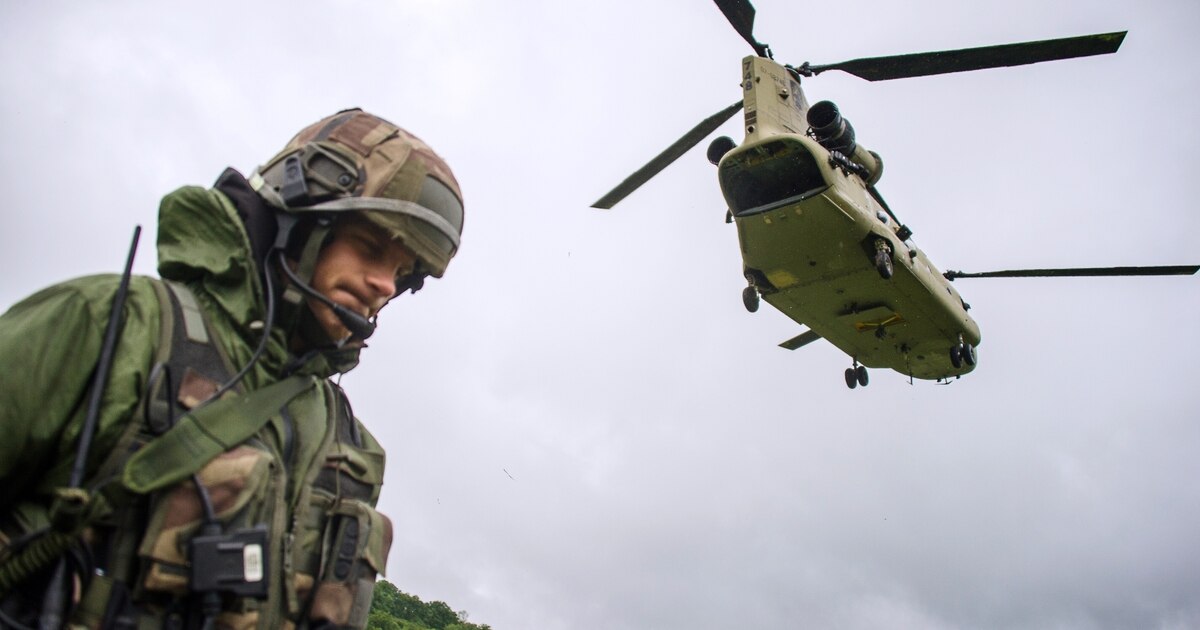 Army Aviation Has a Weight Problem

Army aviation has a weight problem and it’s growing, according to the service’s new Army Aviation Center of Excellence commander.