Cost of Laser Weapon. an approach.

I wonder if it's been discussed before. if there is any "cost breakdown" or maybe just simple estimates on how much a laser based weaponry may cost.

Here in this thread i'd like to share a bit on my "possible" simple approach. This basically only covers the Beam director and its supporting equipment and divides them into 4 major blocks namely :

1. Beam director
2. Laser "head" or generator where the laser is generated
3. Cooling solutions
4. Prime power for the laser.

1.Beam Director.
For beam director cost, it might be analog to cost of a Telescope, as it uses similar maybe identical assembly as both needs to focus beam into a spot, and diameter plays very important role in both of them as it determines resolution for telescope while for laser it will determine beamwidth. Smaller beamspot is better from power perspective as it allows focusing more power into target. This however requires bigger mirror and thus increase in diameter and cost.

The cost for the Beam director could then perhaps be estimated the same manner according to this paper : 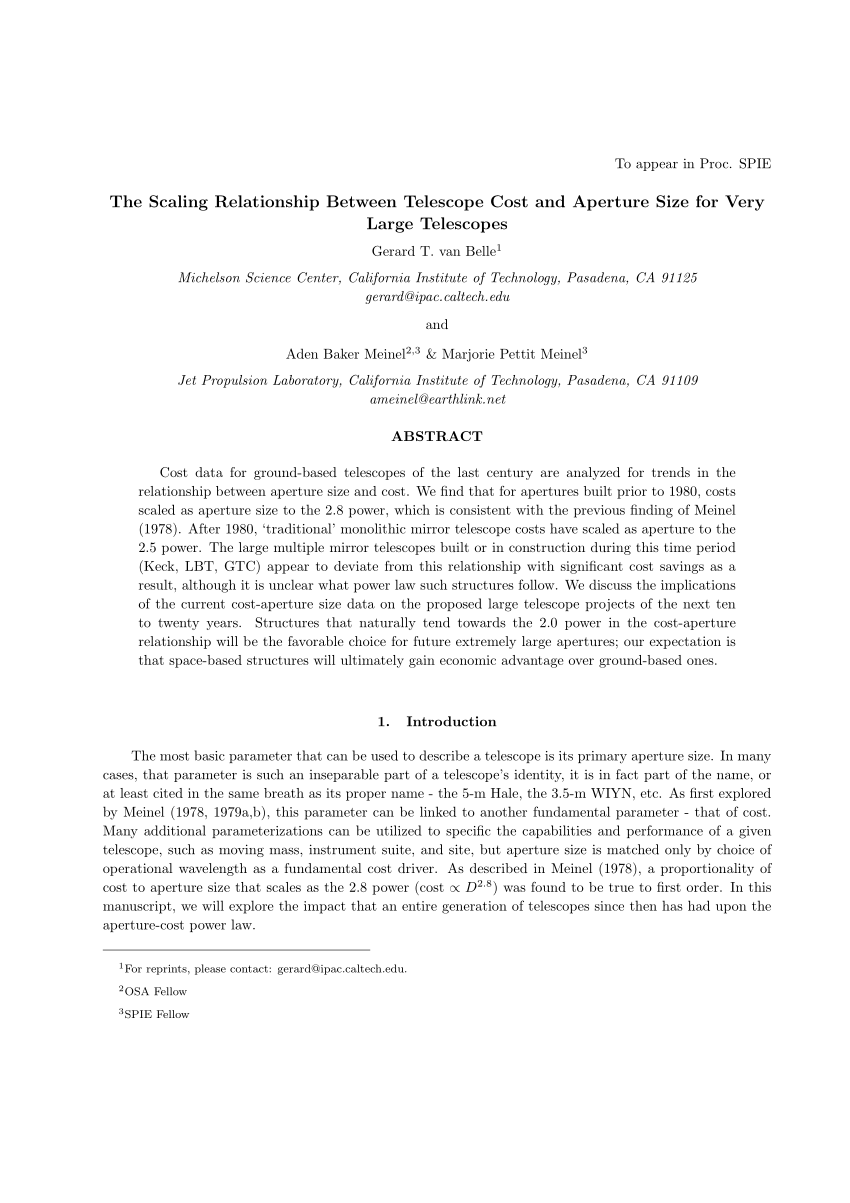 PDF | Cost data for ground-based telescopes of the last century are analyzed for trends in the relationship between aperture size and cost. We find that... | Find, read and cite all the research you need on ResearchGate

For sake of convenience, cube of diameter can perhaps be used. Thus a 1 m diameter beam director would cost about 1^3 = 1 Million USD. The paper use FY-2000 currency, thus adjustment might need to be made for inflation,The cost would then be about USD FY-2021 $ 1,550,836.24

2.Laser Head
This is the most scarce info and perhaps the most expensive part on the laser weapon. The laser generator or "pump", this part is where terms like "Solid state", "Gas" or any other laser generation which converts incoming energy (electrical, propellant or maybe weaker beam) and amplify it into the laser. Unfortunately i am unable to track any cost info in this. The only thing i found so far was this for Inertial Confinement Fusion experiment 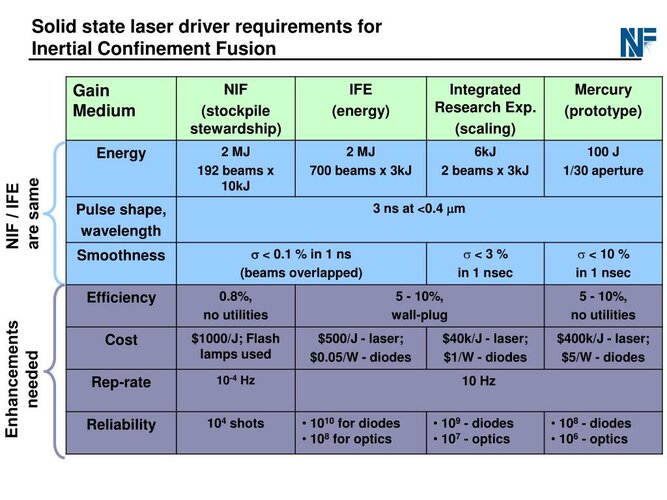 If we assume 50KW power rating (50000 Watt) and USD 500 for every Watt laser produced from it the cost for generation would be 25 Million USD. Which would means nobody wants this unless somehow the cost can be brought down. Maybe we can assume 100 USD achieved through some breakthrough in mass production or different specifications to that used in Fusion experiment depicted above. The cost would be then 5 Million.

All form of electronics produces heat and this heat have to be removed, removing the heat can be as simple as passive radiation to complicated forced flow solution where some form of "intermediate heat transfer medium" like water or air or oil or other substances have to be forced to flow into the device being cooled, absorb heat and then dump it into some form of radiator carefully placed to avoid infra red spikes that can be picked even from space by peer enemy. Obviously cooling solution isnt free. Unfortunately, currently i haven't found any specific papers or methods or way related to cooling cost. There is however a generalized methods in following page :

If we assume 40% efficiency for the weapon, the laser may dump about 75 KW of heat or 255910 Btu/hr which needs to be removed. The next assumption to be made is operational condition, this might be more into the contractual or negotiation between the potential buyer and the weapon manufacturer. e.g "the weapon cooling system must be capable of continuous operation 24/7 with maximum capacity" or some values like one in the link (8760 hour of continuous operation) . Unfortunately, the calculation method above may not really provide the cost of actual cooling system but rather "how much it cost to remove the heat". Still however i think including it would help, especially to "see" whether the weapon is "efficient" as the more inefficient the weapon in converting the electricity or its energy source to laser, the more expensive the cooling cost would be.

This part is quite straightforward, considering similarities between civilian and military power generation. I think typical electricity cost of 0.14 USD/KWH can apply while the generator, assuming gas turbine is used, the cost can be assumed to be USD 687/KW. The power requirement for the weapon is about 125 KW. Thus the gas turbine may cost about 85000 USD.


Those costs elements eventually boils down to the "laser generating equipment"'s cost as below : 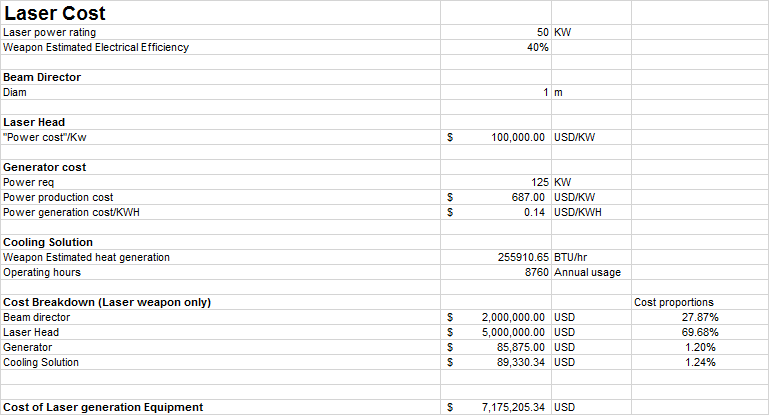 There is differences as in above screenshots i use bit of different inflation factor for the Optics (beam director)'s cost. Since the methods allows scaling, 300 and 1200 KW variants are also could be estimated. 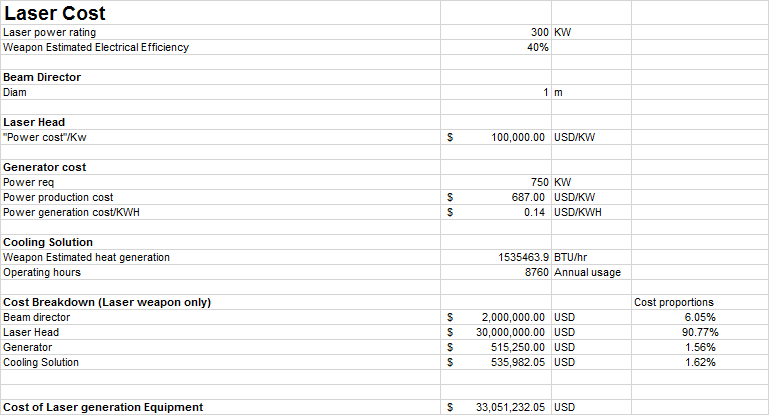 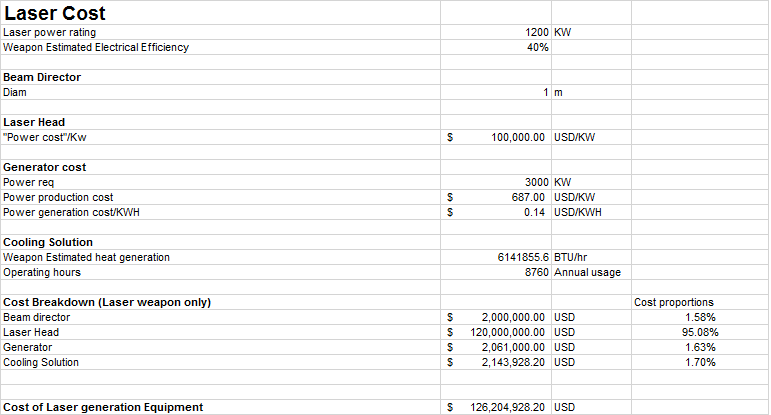 With enough iteration a simple regression can be generated. 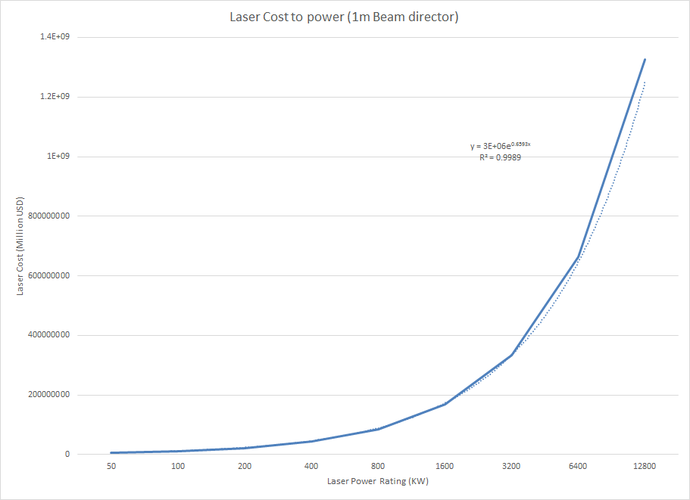 As seen the cost of the laser generating equipment, calculated using above approach scales as a power, and the laser head/generation technology dominates the cost proportions, second would be the optics.

With more effort and more in depth look, maybe a simple tradeoff study can be conducted.

There are still many issues needs to be resolved like sanity checks and more in-depth research, but that's the point of me getting it here in this forum. My NTRL or DTIC search so far havent able to uncover cost modeling for Directed Energy Weapon.

Since the cost estimate above only covers the laser generating equipment. Using it "raw" would be ill advised. The cost for the platform (e.g truck) or installation must be included and possibly if there is any dedicated sensor like radar it has to be included too. So in total, the "equation" would basically look like this :

The cost estimates above also still exclude any RnD and Q & C required. These can drives the "Actual" cost to billions for demonstrator/prototype system. The 50 KW variant calculated above are "cost" about 7.1 Million USD. But the RnD may easily tops on 100 Million or more. Any additional development like new platform or radar/sensor to cue the weapon will add to the tally. One however may be optimistic that only the laser is new while the sensors is using already existing technology and platform. I do not have the means or way to guesstimate development cost yet but the demonstrator unit cost can be gleaned by dividing the resulted prototypes with the RnD cost. Then Production cost curve can take over.

For example. Let's take the 50 KW variant. It take maybe about 500 M USD to be developed. 10 prototypes will then be fielded to help spread the development cost, thus each prototypes bears about 50 M USD. Then one wish to touch the 7 Million mark cost. Therefore production cost curves/learning curve must be assumed. One method can be found here :

The 7 Million can be achieved assuming production cost curves of 80% and 100 units production batch. The real cost or price that needs to be paid however would be more as the company developing and making the design would want some profit, this can be assumed with factor of 1.2. Thus the company may sell the device for 8.52 Million Dollars each. Now if we can assume the laser would be mounted in a chassis.. let's say a truck that costs say 500,000 USD and then having a dedicated battery control radar, an active array with TRM cost of about USD 500 with some 2000 TRM, thus making the Radar cost about USD 2,000,000 as module cost is basically half the cost of an AESA. The 50 KW DEW unit is then cost about 8.52+2+0.5 = 11.02 Million USD.

What the customer pay may also include any additional training or services, but i guess unit cost is the main interest here.


Anyway i think that is all. The other area which can be explored would be whether it's worth to spend 11 Million USD for 50 KW system. This would include "cost per shot" comparison with other system. The technical parameters for the laser however is available below. 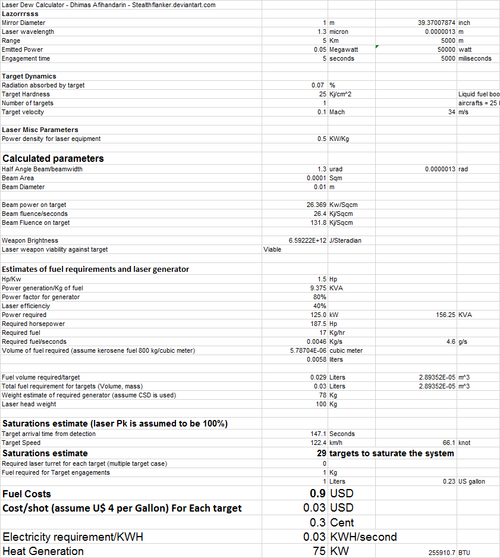 The estimates suggest that the Laser is capable of engaging 29 targets at most with cost per shot about 0.3 Cent per target making it total about 1 USD for engaging those 29 targets. The cost per shot here is equivalent to the fuel cost being used to generate the laser. The laser power estimates method is based on "Physics of Societal Issues by Dave Hafemeister" While the power requirement and generator requirement is based on "Airborne Early Warning System Concepts, edited by Maurice W. Long"

I will compile the spreadsheet used in this estimate and release it as soon as it finished.

So yeah. That's my approach.

Was this made just for the thread? I love it
S

Was this made just for the thread? I love it
Click to expand... 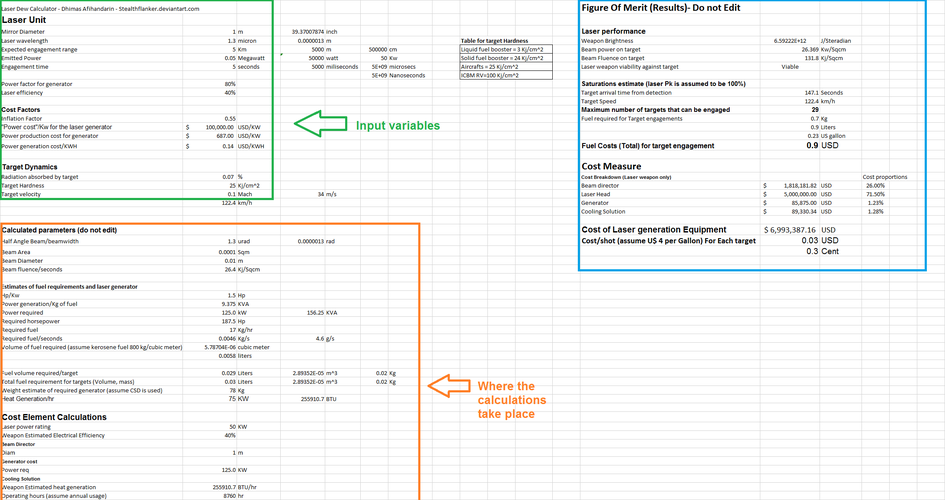 Basically made for usability..hopefully it's easy to find the relevant part. Left in green is where the input is.. right is where the result is read, while the orange box is where the "brain" of the sheet is located, it contains stuff which may not be necessarily needed in the result.

The figure of merit and Laser Unit/input variable part is, hopefully clear enough. user input on the left, see the result on the right.
The result part contains the performance of the weapons, how many targets can be engaged and the cost approximation.

Is the laser turret actuator a expensive part that was missed? If the laser is tasked with area C-RAM it may have to track agile targets crossing at high angular velocity. The accuracy of the actuator also determines effective ranges.

One also wonders about the applicability of adaptive optics at this scale and whether it adds significantly to the cost.
S

Is the laser turret actuator a expensive part that was missed? If the laser is tasked with area C-RAM it may have to track agile targets crossing at high angular velocity. The accuracy of the actuator also determines effective ranges.

One also wonders about the applicability of adaptive optics at this scale and whether it adds significantly to the cost.
Click to expand...

I believe it is included in the optical cost as the paper i cited also mention that the equation includes the supporting structures.