Cold War Peacemaker: The Story of Cowtown and Convair's B-36

New from by Dennis R. Jenkins and Don Pyeatt.

anything new since Jenkins "Magnesium Overcast"?

Few airplanes in history have captured the imagination like Convair's B-36 Peacemaker. The world's first intercontinental bomber served as a strategic deterrent against possible nuclear war and projected the global reach of the Air Force's new Strategic Air Command during the opening years of the Cold War. While many books have been written about this aircraft, none has ever told one of the most intriguing aspects of the B-36 story – the place where the airplane came to be designed, manufactured, and test flown. Once known as “Cowtown” for its abundance of cattle farms, Fort Worth, Texas, became home to the Convair plant adjacent to Carswell AFB, and will forever be linked with the B-36's place in history. This book tells not only the story of this airplane's technical aspects, but also the political and social events that led to its development, the establishment of Fort Worth as its production site, and newly discovered technical information as well.
Click to expand...

Sounds new enough to me!!! Thanks for the info.

but also the political and social events that led to its development
Click to expand...

That sounds interesting, I'll keep an eye on it
A

Got it in today. I don't have his two earlier books on the B-36 but I've seen the photo scrapbook. This book gets into the history of Ft. Worth and how Consolidated came to build a factory there. As far as projects, there's a picture of the Boeing Model 497 model with Rascal and Navaho missiles, a cargo pod, and a relative smaller(but still large) twin engine parasite bomber with a V-tail. Also has a drawing of a B-36 carrying an air-launched SM-62 Snark.
S

AL said:
Got it in today. I don't have his two earlier books on the B-36 but I've seen the photo scrapbook. This book gets into the history of Ft. Worth and how Consolidated came to build a factory there. As far as projects, there's a picture of the Boeing Model 497 model with Rascal and Navaho missiles, a cargo pod, and a relative smaller(but still large) twin engine parasite bomber with a V-tail. Also has a drawing of a B-36 carrying an air-launched SM-62 Snark.
Click to expand...

Are you saying here that the Boeing Model 497 was to carry some smaller parasite bomber? Or did I get this wrong?
A

Yes. It reminds me of the Daimler Benz Project 'A' including the fixed landing gear. The Model 497 shown has 6 turboprop engines. The parasite bomber appears to be a little larger than say the XB-51.

AL said:
there's a picture of the Boeing Model 497 model with Rascal and Navaho missiles,
Click to expand...

"A picture" as in a single photo of a display model? Or is there more than that?
A

Ah. Probably this photo (scanned at the Boeing archives):

any information about that variant?
A sort of Raduga Kh-20 equivalent?
external-belly carried in the B-36?
A

It's the later N-69 version, not the N-25. The drawing shows it on trapeze below the bombay and would held in a nose high attitude for launching.

What, another book about the B-36? It's not exactly aviation's best-known subject--not like the North American P-51 Mustang or the Lockheed P-38 Lightning, for example--but Convair's huge intercontinental-range strategic bomber has gotten its fair share of press in the last decade or so. There's Meyers K. Jacobsen's superb 400-page magnum opus "Convair B-36: A Comprehensive History of Americas Big Stick" (1997), Dennis R. Jenkins' short but useful "Convair B-36 Peacemaker" (1999) (Volume 14 in the Specialty Press Warbird Tech Series) and his outstanding, heavily illustrated "Magnesium Overcast" (2001), among others. Now comes "Cold War Peacemaker." Do aviation enthusiasts really need another book about the big rumbling aerial behemoth?

If you don't have any or all of the other books mentioned, it's a no-brainer decision. Pick up a copy of "Cold War Peacemaker" immediately. It's a fascinating, detailed history that covers virtually every aspect of the bomber's design, development, flight test, production, deployment, variants, upgrades, operations--literally everything you'd want to know about the thundering Peacemaker. Its superbly illustrated with hundreds of sharp black-and-white photos and line drawings, plus a 19-page color section. As a bonus, the 30-page Chapter 1 relates the history of Fort Worth and describes the rise of the aviation industry in "Cowtown," a subject on which the other books are silent. Here's the complete Table of Contents:

But then there are some great Appendices:

The authoritative narrative and crisp photos (with detailed captions) in these sections are sure to make any airplane geek salivate. Plus there are nine pages of detailed endnotes that cite sources and expand on the main text.

Okay, so you should definitely buy "Cold War Peacemaker" if it's to be your only B-36 book. But what if, like me, you already have the other books mentioned, or even more? Should you add this one to your collection? Well, I'm such a fan of the B-36 that I simply had to have this volume in my aviation library, and I never regretted buying it. I suspect most other aviation buffs will feel the same. Even if you already own some B-36 books, there's no reason not to buy "Cold War Peacemaker." Although much of the story and many of the photos have appeared elsewhere, there's enough new material in it to make it a must-have. Its great stuff, and I recommend it highly. 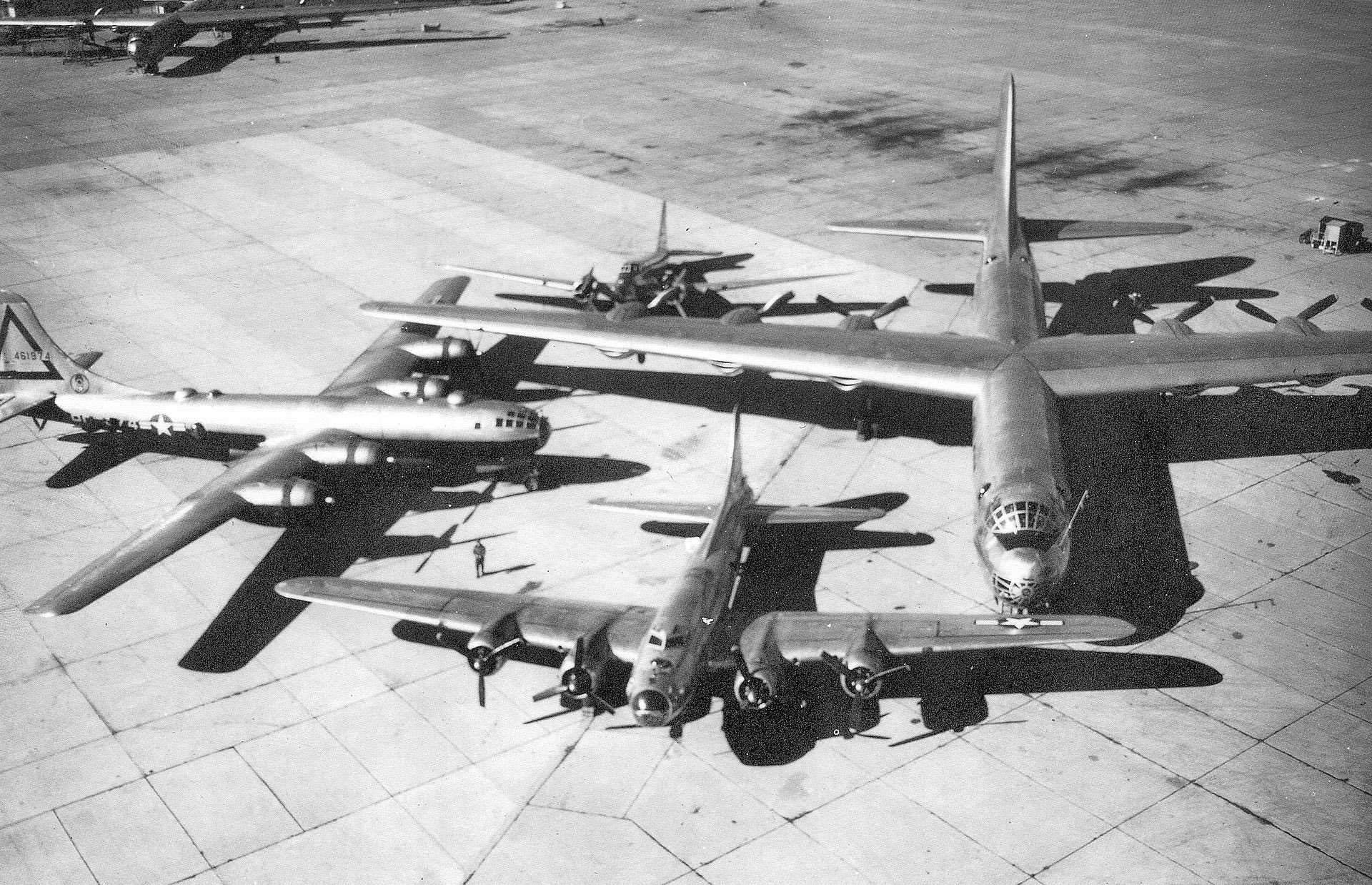 I'd never really appreciated the sheer size of the B-36, holy cow that's a big airplane. Can anyone identify the aircraft rear center?

Did it ever have Jato units...if so it would have truly been the Great Eastern of the skies with jets, rockets and props!

Nope, the high tail indicates more the Douglas B-23 Dragon.