The Scottish Aircraft & Engineering Co. planned to produce
the Burnelli UB-14 under licence in 1936.
This aircraft should have been powered by 2 Rolls-Royce Kestrel XVI
liquid cooled engines ,instead of the radials , and was given the
name 'Clyde Clipper'
Scottish A & E planned a series of designs based on
the Burnelli patents.Among them the
Clyde Carrier - a five ton freighter
Clyde Corsair - a long range bomber
Clyde Comet - two engined fighter armede with a 37 mm cannon.

Is there someone who know more ,descriptions /illustrations, of
these projects ?.

Thanks in advance.
S

See First of the Wide Bodies Air Enthusiast No58 Summer 1995
and (but I have no record of where this photocopy came from, sorry)

It's page 249 from Air Enthusist November 1973.
There's also an illustration of the -not flown- RollsRoyce powered
Clyde Clipper on the cover of Model Airplane News of
August 1937.

Have you ever found more info of the other projected designs
Clyde Carrier , Corsair and Comet ?
S

Thanks for the ref. I'll note it. The 1995 AE ref has a page of Scottish Aircraft adverts, with pictures (that my scanner will do a poor job on) but I've nothing on the other projects, sorry.
S

Still nothing on your list, but this may be of interest
http://www.historynet.com/air_sea/flight_technology/3037316.html?page=1&c=y
L

Thanks smurf.
A good piece of history.I'm convinced that much is still to be dicsovered
about the work of Vincent Burnelli...
L

Thanks Joe...
I'm starting to buy index sheets from the Aeroplane
(hard to find and not cheap) from the U.K. but
I found nothing yet...

I know it Hesham.
Any way thanks.

you can find an unidentified Burnelli/Clyde 4-engined bomber model at POST #9. Any idea about its identity?

Re: Burnelli bomber - help with identification

It's a personal opinion, but I think this four engined design is one of the
Clyde concepts based on the Burnelli patents.
The circular low drag dorsal turret is maybe a Boulton Paul design.
I wonder if this model depicts the Clyde Corsair long range bomber ?

I wonder what's Smurf opinion is about...

Thanks Tophe.This could be a new one for your encyclopedia I guess

" The [Boulton Paul four cannon] turret was also meant to be used on a projected new
bomber, the B.1/39."

Was the Clyde Corsair prepared to this specification?


also I found this drawing,and they wrote on it,Mark II.

I'm trying to figure out the flap setup of the Clyde Clipper.

The OA-1 had three moving surfaces on each wing: flaps on the furthest inboard section of wing, and had two sets of ailerons on the outer wing. The split flaps were apparently to help address wing warping.

However, the Clyde Clipper drawings seem to show only two surface on each wing. They are sufficiently different in depth that it makes me suspect they represent flaps and ailerons. This would mean that the Clipper had a much higher flap area than the OA-1 it was derived from.

One of the drawings also shows the inboard surface using a dotted outline. This makes me suspect it didn't extend to the top of the wing (thus making it a form of split flap or zap flap, if not a fowler).

A painting of the Clyde Clipper 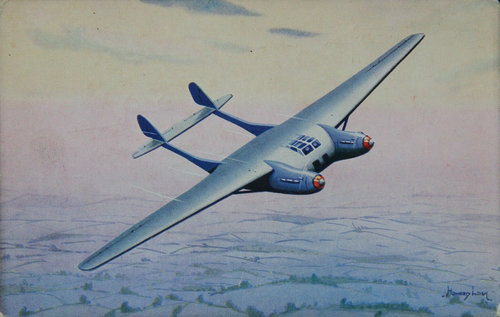