I cross-posted this at the Warships Projects Board....


The 16th edition Norman Polmars' Ships and Aircraft of the US Fleet (pp89-90) mentions a number of unusual carrier proposals being looked at at by the bottom up review at the time of publishing (1997).

They range from an "ultra large STOAL concept of 214,000tons (no angled deck apparant) to some "minimum capability carriers" both SWATH and monohull.

Most interesting to me were the CGV designs which don't seem to be strictly carriers at all but rather a revival of the old flight deck cruiser from the 30s, or the unnofficial proposals by Leopold for the Strike Cruiser.

Ranging from 26-43,000 tons and carrying 12-22 aircraft they had batteries of up to 192 missiles. The aircraft complements seem far too low for an actual carrier and the missile battery is 50% more than even a Ticonderoga.

A few were equipped for CTOL operations with angled deck.

The smallest of the airwings of the air wings was described as 2 helicopters 8 F14s an 2 Hawkeys.

This seems strange, but presumably was intended to provide a minimum Phoenix armed CAP to augment the missiles.

It seems to me ( a layman in these maters) that the small air groups would be a very poor substitute for a carrier. 4 would be needed to replace even a Midway in numbers (but not variety) of aircraft. However, as cruisers, particularly if S-3s and ASW helicopters were substituted for the fighters, the vessels might have been really formidable escorts.


Does anybody have any info or pics on these or any insight into what the designers were thinking?
Z

Its likely their thoughts where on distribution of carriers, the shear cost of a CV is huge and only so many could be afforded, consequently only so many could be in only so many places.
So having a fleet of smaller cheaper CV's could extend their coverage, be tasked where a full CV was'nt available or needed. Its also possible they could act as a way of offloading certain machines from a main CV to free up deck space.

Though not having this book I can guess these studies drove home the minimum is something like the CVV concept. Smaller ships would be fine for smaller, lighter and with lower TO and L energy aircraft than the F14.

Curiously Russian sounding idea of such a missile loadout on a Carrier though.
O

Posts about the SR hovercraft carrier were split and moved to its own topic here:
https://www.secretprojects.co.uk/threads/saunders-roe-hovercraft-aircraft-carrier.33630/
P 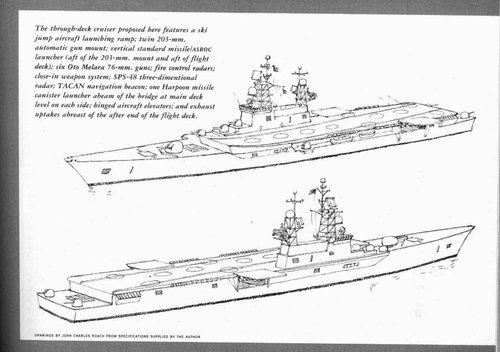 Idea is the same but the era is different that is from the late 1970's (I pretty like that design, will draw it sometime! )
F

I do believe that this is the one.

The MISSION ESSENTIAL UNIT (MEU) or also known as the CGV. There more information and pictures in link thread.
B

Does anyone know if thre were any plans or art of them other than the single image we've seen? It looks to me as they never made it to the stage of "preliminary modeling" which makes sense when you consider that even a quick glance lets you know that a ship like that would be pretty close to the cost of a full up CV and far less effective in, well any role.

Firefinder said:
I do believe that this is the one.

The MISSION ESSENTIAL UNIT (MEU) or also known as the CGV. There more information and pictures in link thread.
Click to expand...