I have discovered that CAC CA-15 initial design was different from the aircraft flown in 1946. At the begining, the selected powerplant was the radial R-2800.

I've found only that pic:

...Think I have to purchase a copy of Unknown Number 15:

Interesting, I think, is the shape of the fuselage underside, which shows an
distinctive kink, probably as an outlet for cooling air. I cannot remember seeing
such an installation in another R-2800 powered aircraft.

It doesn't appear that the exhaust exits at the rear of the cowl, it just looks too tight, so possibly this shape not only helps with cooling, but also is where the exhaust exits. Maybe like an abbreviated version of the P-47's exhaust system.


Jemiba said:
Interesting, I think, is the shape of the fuselage underside, which shows an
distinctive kink, probably as an outlet for cooling air. I cannot remember seeing
such an installation in another R-2800 powered aircraft.
Click to expand...

Picture of mockup with R-2800 engine.

In the last picture Justo posted it is interesting to note that the original R2800 version seems to have an eliptical trailing edge.

The two pictures you posted were ones I originally provided someone a while back - they are from "Wirraway, Boomerang and Ca-15 in Australian Service" by Stewart Wilson. The second of Justo's is from the same book.

If you want probably the best set of info on the Ca-15, get a hold of this book. 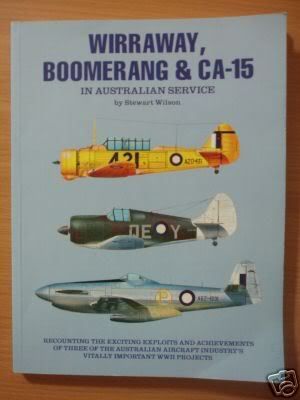 It has the entire development story including lots of pictures of mockups and other iterations. It also explains the reasoning behind the engine changes. It often becomes available on ebay - in fact there is a copy for sale on ebay Australia right now - see here:

Interestingly though, I believe the design shown in Justo's last picture as being the initial proposal is not. The original designs for what became the Ca-15 looked a lot more like the earlier Boomerang.

Dear gentlemen, thanks a lot for that precious info

(I'll see shipping costs for that book on eBay)

Member Abraham Gubler mentioned elsewhere that Commonwealth Aircraft was considering an original fighter design circa 1939. He describes this Wirraway follow-on as "an Australian-designed, highly-manoeuvrable, single-engine fighter similar to but more advanced than the ‘Zero’".

According to Abraham, a CAC designer had been personally involved with Mitsubishi's 12-shi program. An "‘Aussie Zero" would be superior to the Reisen because of presumed access to superior materials. The CAC project was rejected, the RAAF "remaining fixed on the [CA-11 Woomera] twin-engine single role aircraft".

Any other details on this fighter project?

Under "CAC CA-15 original design", Greg mentions that the initial CA-15 looked more like the Boomerang than the later R2800-powered concept. That suggests that nothing remained of the "Aussie Zero" concept by that stage.

One final puzzle is designations. In the "Commonwealth aircraft" thread, Greg also covers every wartime CAC designation from the first CA-1 Wirrawy to the two-seat CA-21 Mustang. Were CA-x designations only applied to designs that had advanced fairly far along?

The person in question is Fred David, a German Jew who worked for Heinkel on the He 100 before being forced out by the Nazis. He then worked for Mitsubishi designing aerostructures for the Zero before finding a new home in Australia with CAC. He was later the Chief Designer on the Boomerang emergency fighter and the CA-15 fighter. The CA-15's original configuration was very much a He 100 with Pratt & Whitney R-2800s!

CAC proposed a single engine, lightweight fighter before the but was knocked back by the RAAF who didn't think single engine fighters had a future and the Government that was more interested in deals with the British Government with the Beaufort and Beaufighter. The best published source for information on this proposal is “Armed & Ready: The industrial development & defence of Australia, 1900-1945” by Andrew Ross. I haven't seen any information on the specifics of the design but they are no doubt there somewhere in the archives.

Apophenia said:
Under "CAC CA-15 original design", Greg mentions that the initial CA-15 looked more like the Boomerang than the later R2800-powered concept. That suggests that nothing remained of the "Aussie Zero" concept by that stage.
Click to expand...

The CA-15 was always a start from scratch design with the R-2800 and never bore much similarity with the Boomerang which was just a fighter version of the Wirraway, itself a Texan. The design had three major stages, pre-Laminer flow wing, in which it was very much a He 100, post Laminer flow in which it was a big Mustang with a Double Wasp and final experimental stage in which it was powered by a Griffon. “Wirraway, Boomerang and Ca-15 in Australian Service” by Stewart Wilson has illustrations of the original CA-15 design.

If you look closely at the design progression below you can see on the first model you can just make out the pre laminar flow wing.

The ‘Aussie Zero’ was to be a new airframe and wing powered by the R-1830. The only similarity with the Wirraway/Boomerang was to be production techniques and some components.

Abraham: Many thanks for the details and clarifications. I now have a vision of an R1830-powered He-100 locked in my mind. Hopefully those archives will someday reveal detailed plans.

Justo: prolific as always! I love the P-176 especially -- very pugnacious. And those designations answered my other question, too. Obviously, the Zero-like design would have been assigned a P-xx numbers but, as it didn't get far, not a CA-xx number.

The people on this forum never cease to impress. Cheers!

With some luck Volume 2 of Keith Meggs' "Australian-Built Aircraft and the Industry" which is dedicated to devoted entirely to the history of The Commonwealth Aircraft Corporation ( see here might cover this a little more.

Justo, do you also have a 1/72 scale drawing of the actual prototype CA-15 that was built? I've been looking for one for several years but to no avail.

Moderators: Any chance this thread can be combined with this one:
http://www.secretprojects.co.uk/forum/index.php/topic,3846.msg30174.html#msg30174

As a general CAC CA-15 thread? Both covering the same thing.

As promised in another thread (AH R2800 fighters) here is the 17 pages of the CAC report A-102 of late 1944 into the final wartime design for the CA-15 fighter. This aircraft was to be fitted with the high power Griffon engine and differs from the flying prototype finished after the war with a much lower power Griffon engine. Performance figures are provided against the P-51H.

Here are some more CAC drawings of the CA-15 design evolution from pre-laminar, Aussie FW-190 through to wartime Griffon version. Also some of the weapons options. These scans are from "Wirraway, Boomerang and CA-15 in Australian Service" by Stewart Wilson (see above) a series of books with loads of good information on RAAF aircraft (and what ifs). The book also has lots of imagery of CAC models, artwork and propriety three views which I haven't scanned.