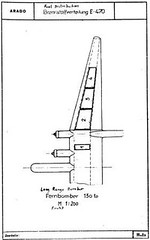 A picture yes, but non official, just my personnal interpretation (from my free book at http://cmeunier.chez-alice.fr/Free_EoFG_MV.htm )

Other interpretation, justifying the so distant booms: a push-pull internal layout.

airman said:
@ page 102 of Midland of secret bomber project there are designed version of four engines !
Click to expand...

This page of this book says that the Arado E 470 was very similar to the Fw 261, and I admit the layout of this one would be also easier to understand with a 6-engined push-pull variant, that may require external booms:

Was there a drawings to the six variants of it ?.

hesham said:
Was there a drawings to the six variants of it ?.
Click to expand...

I don't think anything in the above thread says that there were six versions of the E 470. But the short answer to your question is: no.
I specifically addressed this point in my Luftwaffe: Secret Bombers bookazine. The Arado report on the E 470 (undated overall, but with individual pages dated November 1941, January 15, 1942 and January 18, 1942) gives calculations for four theoretical variants (A to D) none of which are illustrated and which only exist as sets of numbers forming an analysis of weights and structures.
It does include two drawings of an 'E' variant - one with internal cargo space and one with external cargo space.
All of this work is theoretical - to explore options for the structures of long range aircraft. Despite the drawings, the report only makes suggestions for potential 'preliminary projects'.

but Mr. Manfred Griehl said that there was a variant F,it was for transport
duty ?.
L

Tophe said:
Other interpretation, justifying the so distant booms: a push-pull internal layout.
Click to expand...

but Mr. Manfred Griehl said that there was a variant F,it was for transport
duty ?.
Click to expand...

I was about to say that there were only five designs - A, B, C, D and E. But looking more closely at the report conclusion, it says:
"Analysis of an aircraft design with supplementary cargo space
Appendix 41 illustrates an alternative design with supplementary cargo space. As already mentioned, this design is less favourable in FWS value and weight, than Design "E" in the transport aircraft variant. The layout of the cargo space, however, is probably simpler. As a long-range bomber without cargo space, it is aerodynamically somewhat cleaner than Design "E". A just appreciation of the pros and cons of the two arrangements is, however, only possible by a detailed analysis, which was outside the scope of the present work.
To conclude, it may be said that the combination of a transport aircraft for large, centrally-carried loads over distances of average length, with a long-range bomber layout, is quite practicable."
So both Design E and the unnamed 'alternative design' can represent either bombers or transports. There is absolutely no reference anywhere in the report to the 'alternative design' being called 'Design F'. I would guess that Griehl called it that for the sake of convenience.
Only Design E and the alternative design appearing in drawings, the numbers of which are 'SKE 470-02' (for the alternative design) and 'SKE 470-03' for Design E. Perhaps there was an SKE 470-01 but it's not included in the report and it seems highly unlikely that we will ever see it.
Last edited: Dec 18, 2020

Tophe said:
Other interpretation, justifying the so distant booms: a push-pull internal layout.
Click to expand...

A push and pull design in regards to 2 engines sharing the same boom would make sence but what about say a piston engine forward a Jet turbine in the rear of the fuselage would mean removing the central stabiliser but enough tail are I would imagine
Click to expand...

The body of the report only refers to the use of the DB 613 - either four or six. But a graph towards the end shows that the BMW 801 and BMW 8002 (as opposed to the BMW 802) were also briefly considered. No jets though.

and I just explain the text.

and I just explain the text.
Click to expand...

Must we really go through Griehl's books, line by line, attempting to work out what his sources were and whether they were accurate?
P

After 17 years it's time to close it

PlanesPictures said:
After 17 years it's time to close it
Click to expand...

I don't see any point in locking this thread. According to the bookazine that Dan Sharp wrote in 2016, the short-wing E.470 variant with six engines (Variant B) is described in Arado documents as having a gross weight of 379,915 lb (172 metric tons) when carrying 11,000 lb of cargo over a distance of 9.300 miles. Although the book Luftwaffe Secret Projects: Strategic Bombers 1935-1945 quotes a gross weight of 286,520 lb (130,000 kg) for the E.470 Variant E, this figure most likely applies to another one of the Arado E.470 design studies because Sharp notes that the gross weight of the Variant E is 110,000 lb (55,000 kg).
Share:
Facebook Twitter Reddit Pinterest Tumblr WhatsApp Email Share Link