Did any of the Valiant, Victor or Vulcan designs look at an engine mounting other than in the wing root - pylon mounted or directly on the wing as in Concorde (for the Vulcan at least)?

Other than possibly easier maintenance, would these positions have offered any advantage?

Regarding to Vulcan, I think that not. From the beginning the engines were the internal part of the fuselage.

The advantages of pylon mounted engines are easier maintenance and quick replacement. On the classical wing they also avoids wings torsion. But they have also some disadvantages as higher vunderability compared to internal placement, they can absorb filth from the runway or they can be some sort of danger for the ground crew.

PMN1 said:
Did any of the Valiant, Victor or Vulcan designs look at an engine mounting other than in the wing root - pylon mounted or directly on the wing as in Concorde (for the Vulcan at least)?

Other than possibly easier maintenance, would these positions have offered any advantage?
Click to expand...

You have to read British secret projects "bombers". All early design of v-bomber is on the book

And what was this ?.

Short P.D.1, basically a Sperrin front fuselage with a new tail and an aero-isoclinic wing.

Old drawing, based on the article "Tailless Trailblazer" in Aeroplane Monthly. November 1995.

Old, but a lot clearer than the 3-view in the Putnam Shorts. This one has leading edge intakes, the one in hesham's picture has over-and-under-the-wings engines. Yours would be a later version?
Tony Buttler's 'British Secret Projects - Jet Bombers Since 1949' has a 3-view on page 26 which shows the P.D.1, designated S.B.1, with four over-and-under engines and one in the tail.
(Edit 20 nov 2020) Page 40 in the revised edition.
Last edited: Nov 20, 2020

Here's the artist impression of the P.D.1 from the AM article. Should have mentioned, that details
like landing gear were just derived from the Sperrin, so it's just an "educated guess".

Thank you my dears Arjen and Jemiba very much.

Great drawing, Jemiba, and nice artist's impression, of a rather attractive design.

The S.A.4 Sperrin of 1951 had a straight wing and conventional tail. Short planned a radical redesign featuring G.T.R. Hill's "Aeroisoclinic" swept wing in tailless configuration. Swept wings tended to bend and twist badly at the wrong moment, i.e. when under high stresses. Hill's idea was that the wing would bend in such a way as to retain its desirable aerodynamic properties (The Horten brothers in Germany had experimented with this idea in the 1930s, I don't know if Hill was aware of their work). The Short S.B.1 and S.B.4 were testbeds for the wing design. The tow-launched S.B.1 glider in fact flew just before the Sperrin, but crashed later on its second flight. The wings were repaired and mated to a new powered fuselage to create the S.B.4 Sherpa. It flew in 1953 and I think is still at Duxford or somewhere. Although it did not carry the name, it was in effect the last of Hill's series of Pterodctyls, themselves a continuation of J.W. Dunne's original tailless designs, one of which was the first aeroplane ever to be certified as stable in flight. The aeroisoclinic Sperrin would have been a historic beast indeed, but I never thought of it before as one of the V-bombers.

As an aside, Short Bros. built both the first - the D.5 - and the last - the Sherpa - machines in the classic Dunne lineage ever to actually fly.

The 4 engines arrangement (in the wing roots) of the AM article's project P.D.1 is quite different compared to the 5 engines one (4 above & under the wings and one in the tail) shown under the same project number in Tony Butler's "British Secret Projects Jet bombers since 1949" page 26 and in the video "The lost V-bomber".
Could one of the two be in fact one of Short's proposals for the specification B14/46 (i.e. a pre-"Sperrin" tailless S.A.4) and the other one the Short proposal to the specification B35/46 (the P.D.1)?

Wasn't there also a concept of a Valiant with podded engines for long-range operations? I believe it is mentioned in Tony Buttler's "British Secret Projects 2: Jet Bombers Since 1949".

From Tim McLelland's Britain's Cold War Bombers, this was the ejection seat rig designed for the rear facing crew members. The configuration was apparently tested in a single Valiant, a Mr W. T. Hay being the test subject, though I don't know which airframe. It dates to 1960 and the design was attributed to Martin Baker. I assume the system ejected the crew in sequence, each seat moving under the open hatch after the one before it had exited the aircraft. 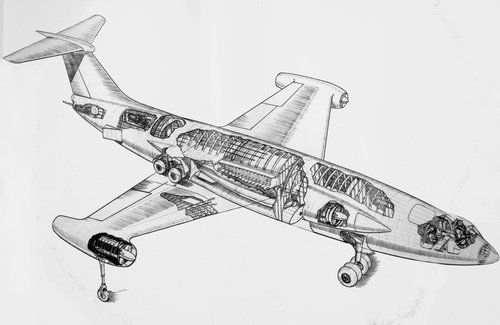 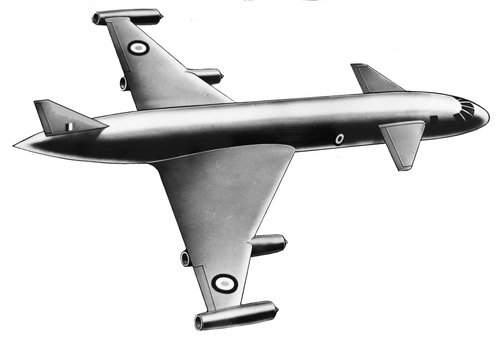