What weapons was the F2 intended to carry had it entered service?
A

Same as the Mirage F1 A2G, really.
A2A: Magic 1 for self-defense (it was a ground attack aircraft, so probably no '530 SARH medium range AAM, that would be for the F3 and F1 only). Magic 2 in the early 80's, a far more reliable weapon.

-Probably AN-52 tactical nukes, too, since OTL Mirage IIIE and Jaguars got them. Later ASMP, since the 2000N got it.

-Exocet was the Aéronavale business, although Dassault would probably integrate it for export (cough, Saddam Iraq).

-There might be a reconnaissance variant, to replace the IIIR - screwing the F1CR in the process.

- And another one with ECM big pods (Boa, Calmars) to dig large holes into the Warsaw Pact radar wall, ahead of the tactical and perhaps even strategic nuclear strike aircraft.

One very interesting mission would be ECM / ARM. Mirage IIIE and Jaguars not only were single-seaters, but they also lacked thrust to safely carry that beast of missile: the AS-37 Martel. Their pilots did the job nonetheless, but it was no easy shore. The F2 massively powerful TF306 turbofan and two-men crew would be extremely welcome there.
Last edited: Sep 29, 2020

Can't promise that the Mirage F2 will be seen, but check out the French TV Series "The Aeronauts" for contemporary, late1960's Mirage footage. It's also interesting to see the French Airforce from that period.

Found that pict some time ago, but can't remember where : 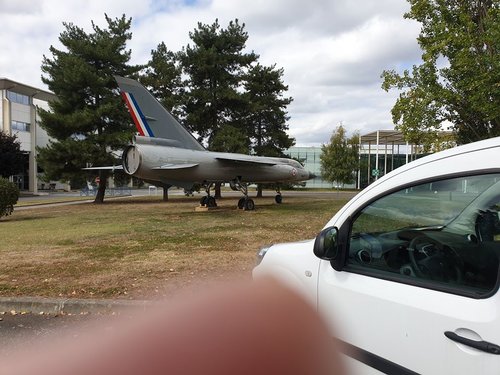 Nice finger ! CEAT is a state-owned aeronautics laboratory so usually not opened to public. The photographer must work there, or lucky, or maybe it was an open day...

The Mirage F1 looked so cool that Matchbox turned it into a toy.

They wouldn’t let me take photograph when I was there.

I believe there might be another surviving unfinished F2 or F3 prototype, or at least one might have survived Into the early naughties.
Last edited: Oct 17, 2020

www.art-aviation.com
They sell models (I'm not affiliated with them).
A