Reason of question: discussion at other forum
Subject: way of YF-12 launched AIM-47s

My reasons: based on logic and aviable documents
His reasons: report he wrote based on *classified* GRU reports regarding YF-12/AIM-47 tests

There was no "pylon". There is, however, an image of an F-12B mockup featuring an AIM-47B mockup mounted onto an extended trapeeze assembly. This may be the result of his confusion.

All AIM-47s were carried internally and were ejected using pyrotechnic charges. This was Lockheed's solution to separation issues. They conducted a few inert drop tests and found that unless they corrected the missile's attitude, it would have ended up going right through the cockpit when the motor fired.

There are plenty of images of AIM-47 loading and the inside of the weapon bay available including some schematics from the pilot's manual. Lots of them are in the WarbirdTECH volume. There is no evidence of any pylon assembly ever having been fitted, or even having been considered, apart from what appeared on the F-12B forward fuselage mockup.

I remember that. Ben Rich's phrase was "between the front and rear cockpits". Which would have been a bad thing.

Well it certainly would've been a suprise, that's for sure ;D

An additional note: there is a video available online that shows an AIM-47 launch. No pylon visible. That alone should shoot down the pylon argument.

Thank you, Scott and LO. Interesting fact that most vital description I've found of launch scheme when remembered that I have 'Kelly: More than my share of it all...'

SOC said:
There was no "pylon". There is, however, an image of an F-12B mockup featuring an AIM-47B mockup mounted onto an extended trapeeze assembly. This may be the result of his confusion.[...]
Click to expand...

I presume, you mean this picture: 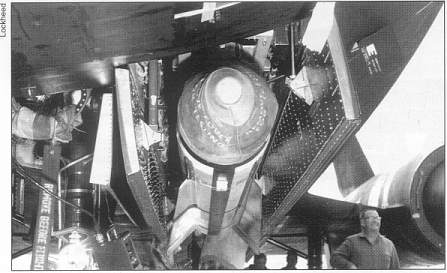 The missiles were moved out of the weapons bays and into the air stream on a device called a trapeze, and then fired.
Click to expand...

flateric ,maybe your opponent means with "pylon" the camera pods under the engine intakes.

First reference to AMRAAM launch at M=1.01 was not enough...second reference with launch speed of M=1.5 in november 2004 make no good (I was said it was launched from the wing pod), now (after proving that last AIMs supersonic launch ws made from the bay) I need to prove that Raptor can launch it at M=1.6-1.8...because these are *combat regimes*.

I'm worrying because chap insists he's professionaly working on this thematic for 20 years...oh my...are we in danger?

People online can say whatever the hell they like, honest or not.

Did you know that I'm the Emperor of Eurasia? Send me yout money.
D