This was a design from the movie "The 6th Day," designed by Rob Cobb. Normally, wouldn't quite fit in here, being sci-fi and all... but according to an interview with Cobb, the US Army expressed interest in the design. So, you never know...

This is the master model, nearing completion. Molds will be made, copies will be cast and hopefully truly vast numbers of 'em will be sold...

What scale? - I may be interested in a couple.

Maybe a soldier of the US Army, wearing uniform, smiled and said "I love science fiction" ;D, that would be an explanation for "the US Army expressed interest"…
More seriously, let us imagine that official designers were interested (I am a what-ifer, I like imagining). To be interested officially, they should have seen something that may work and that have not been considered yet. There are several points possible according to me:
- the symmetrical NoTaR: pushing either on port or starboard (but why? Why the main rotor would turn in opposite directions? That would be awfully complicated to drive, for no understandable reason… yes?)
- the half X fixed blades/swept-wings (but how? When the starboard wing is fixed, the port one is not in the right direction to be fixed, should it turn in the opposite direction to come back to the fixed position? Stability may be awful in these few seconds)
- the wing trailing edge with a flap becoming a rotating leading edge of blade (is it possible? Has this been tried on the X-wing demonstrator?)
- why is this aircraft named "Whispercraft"? (what would make it less noisy than helicopters at take off/landing?)
As far as I am concerned, civilian dreamer, I am interested, to smile ;D (in a Sci-Fi scenario where every impossible tool is working miraculously) while I don't understand how the US-Army may have been interested to use or to order… :-\
Are there answers to my naive questions?

The symmerical NoTaR probably just is a detail, to make modelling easier
But the problems with the change from straight to swept wings I cannot see.
IIRC the principle was that of the canard rotor wing, but without canards and
the big tail plane, that probably would be needed, to give transition a chance,
see Boeing Dragonfly.
First, the rotor is stopped in the straight wing position, then both wings could be
swept. Just one step further, then the CRW, not too phantastic for an Arnie film .. ;D

The S-72X was never flown with it's X-wing rotor, but on most stoppable rotor designs,
the rotor blades are fitted with leading and trailing edge flaps, so there' no predetermined
position for each blade.

Scott, for the 1/72 kit, you should add this fancy strapp-on remote control, used
to full advantage in the film ...

A few years back, some military officials got together and wondered whether Hollywood could play a part in the U.S. defense effort.

They weren't looking for propaganda films that would win the hearts and minds of the Arab world, or for talent to entertain the troops, or for free DVDs to send to remote aircraft carriers. They were looking, strangely enough, for fresh ideas in designing the Army of the future. Stranger still, it turned out that Hollywood had plenty of ideas, some of them good ones.

So it happens that inside a drab, '70s-style office building here, one of Hollywood's hottest screenwriters, a production designer from "Alien" and "Back to the Future," the co-writer of "Apocalypse Now" and the director of "Grease" have gotten together with some of the U.S. Army's leading academics and computer scientists to brainstorm about the next generation of weaponry and equipment.

The meetings, with these and other Hollywood figures, have been going on once or twice a month for more than two years, taking on extra urgency after the events of Sept. 11, 2001.
.....
Production designer Ron Cobb's sketch for the robotic mule was at first greeted with skepticism by Army brass. So he was surprised (and not a little flattered) to learn a few months ago that the Army had asked Boeing to figure out how to build a vehicle that looked exactly like his design.
.....
Former screenwriter James Korris had recently taken over the Entertainment Technology Center at USC, researching digital cinema. He soon found himself setting up an Army think tank for "immersive realities" -- more realistic training videos.

That's how it began. Lindheim was recruited from Paramount, and the two began to contact colleagues who they thought would be interesting and interested. Some people seemed obvious choices. In interviewing Ron Cobb, they suggested that he look at the "whispercraft" in the Arnold Schwarzenegger movie "The Sixth Day," a helicopter that converts to an airplane and back again. Cobb was already familiar with the plane -- since he'd designed it.

In "The Book of Alien" Cobb describes himself as a "frustrated engineer";
"I like the challenge of designing a spaceship right down to the fuel tolerances and the way the engines function."

On one of the sketches of the Nostromo it says it is powered by Rolls Royce engines. Mua ha ha ha.

Would you happen to have a picture of Ron Cobb's robotic mule? I would rate him as one of the best concept artist along with Steve Burg. Pity, there's no compilation of his sketches like what has been done with Syd Mead. By the way, a little off topic but #22 of the British hobby publication, 'Sci-Fi & Fantasy Models' has a sketch of his concept for the Dune Ornithopter. 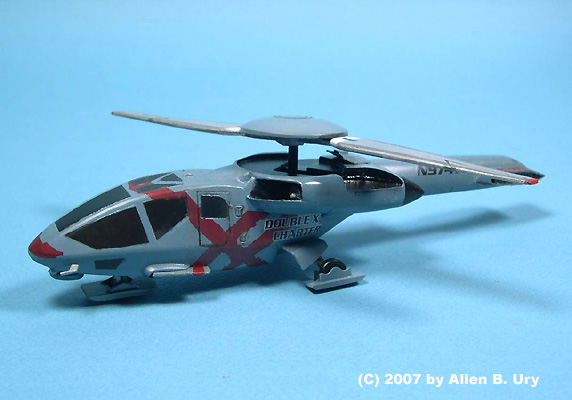 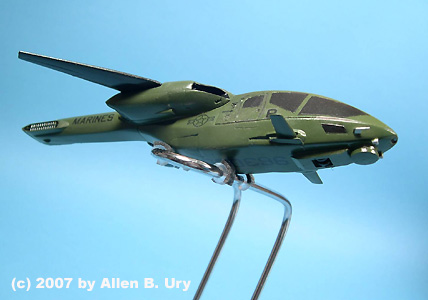 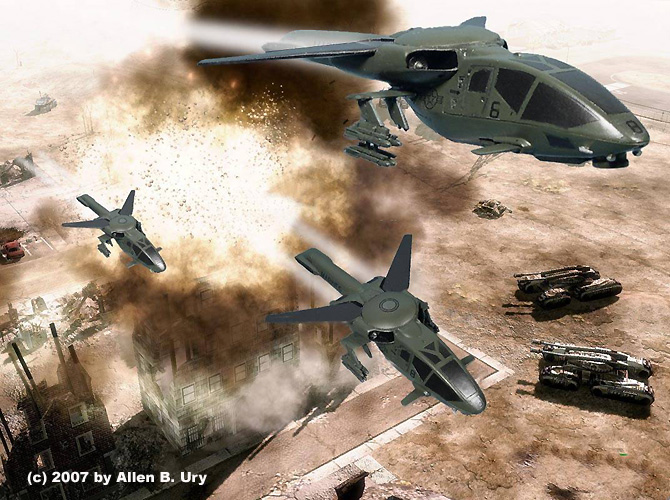 Just found that picture posted by "kitnut617" at the what-if-modeler-page !

Here is another view of the same air...err...movie prop.

I'm thinking of attempting a scratchbuild of the Whisphercraft in card as the resin kit is too expensive for me. Does anyone know of any schematics?

What is this Whisphercraft? Google finds nothing about it, except this very topic here...
I just knew the WhisperLiner, US-name of the Airbus A300 in the 1970s.
Could you give us a link towards the Wh. resin kit page?
J

Sorry I did not remember, and when Google told me "only on secretprojects.co.uk", I thought this was the topic here, and I did not follow the link. Shame on me...
To get a 3-view, maybe there is hope if one among us buy this kit, he/she may scan the 3-view probably included and e-mail it to interested ones.

Tophe, you can find something, that may be useful here:
http://simviation.com/adoptfsc.htm (see below).
And even better, you can even fly it by yourself in the FS ! 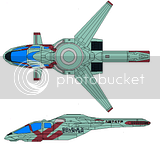 posted by John Braungart at http://groups.yahoo.com/group/space-modelers/

At the risk of being off-topic....

"..to outlive the rather extremely mediocre movie"
Probably it just was the reason, that we remember this movie at all !
But "very mediocre" is correct, I think, no comparison at all with "True Lies",
although this movie was good public relations for the AV-8B, too !
B

Jemiba said:
"..to outlive the rather extremely mediocre movie"
Probably it just was the reason, that we remember this movie at all !
But "very mediocre" is correct, I think, no comparison at all with "True Lies",
although this movie was good public relations for the AV-8B, too !
Click to expand...

Just saw it in a mil-surplus store's lot. Asked the owner how they got it. She said her father traded "an old Bell" for it. Some production crew blew up the Bell for a movie. Dunno anything about that. She said that the Whispercraft was the only good thing in the movie. I'll post pictures later.
B

Just call me Ray said:
At the risk of being off-topic....


...it's amazing how popular this design has become, and it's amazing how much it's managed to outlive the rather extremely mediocre movie that spawned it
Click to expand...

I think every dollar expended in the movie is justified for this cool design ;D ;D ;D
J

Not sure this is the place, not the forum, but since everybody is interested in aviation, I wonder if I could find some enthousiats with aeronautical know-how to criticise and help me in my designs... (a completely out-of-my-mind project). See what I have up to now...
The model is 1538mm long with a wingspan (heli mode) of ~1700mm, body in carbon-fibre, two Wren44 Gold jet turbines...

Fantastic Plastic once made a model after a pattern from Scott Lowther, this forum's orionblamblam.

I'm sure that he, more than anyone else here, could tell you if your work is faithful to the actual Whispercraft design or not...
S

Meanwhile, a three-wiew plan by none other than Ron Cobb himself, the man behind the Whispercraft's design.

Hope you don't mind me, but although the whispercraft can be seen as based on the
Boeing X-50 Dragonfly, it's better suited to this section.


Jemiba said:
Hope you don't mind me, but although the whispercraft can be seen as based on the
Boeing X-50 Dragonfly, it's better suited to this section.

The Whispercraft CAN'T be seen as based upon the Dragonfly, Jemiba, since it was created BEFORE the Dragonfly project even existed!
J

I know the drawing you refer to: I used it as a base!!! (and it is also on my blog, with more details)
The "little" problems with Ron Cobb design is the combination of wing-folding AND swash plate (which the model will say "feasible or not"). On Ron design, the wings pitch actuators are lined-up with the wing centerline (which eliminates the swash plate). No rotating actuator will sustain the stress of changing the pitch on every rotation of the "rotor".


Stargazer2006 said:
The Whispercraft CAN'T be seen as based upon the Dragonfly, Jemiba, since it was created BEFORE the Dragonfly project even existed!
Click to expand...


Thanks, I'm quite clear about that !

The plot of "The 6th day" still is far away in the future, so THEN you can find the Dragonfly and its
successors on the Mojave aircraft boneyard.
B

There's another thread on this craft here:

I posted some photos of the actual movie prop, which is located in Mojave, CA.

Many thanks blackstar ! Somehow the search function fooled me, but now you've found, what I was
looking for. Better to have just one thread about this theme, although I was ranging between the
two sections.
Actually, as I found out in another forum, for some people the Whispercraft seems to be more real,
than many other (existing) types !