Here are some images of my concept for a British RAF service F-117 variant. I went with the name
"Havoc GR1" for my concept, though more than likely if such an RAF F117 actually existed it would probably be named Nighthawk just like the USAF version since the F-4 in RAF service retained the name "Phantom." In WWII US craft in RAF service sometimes had a different name from their American counterparts though. The concept I drew has serpentine duct-work for the open, grid-less intakes, the ducts being more forward positioned as well compared to the original F+117. Due to the short length the serpentine ducts also have a splitter structure so the design is very similar to the B-1B intakes. My concept also has a slightly different upper fuselage shape and much more angled back nose and forward fuselage. The wings are also slightly altered in faceting and for the rear edge, as is the exhaust angle. The tail fins are laid back at a shallower angle and are also much larger than the F-117A fins to further increase flight stability. The ventral fuselage is for the most part almost the same as the original F-117 and has the same size dual bomb bays and same landing gear however there are numerous added special systems the F-117A doesn't have. I envisioned two versions, one of which had a mostly flat-plate canopy structure as a single prototype and the production models have a one piece glazing for better vis, the single glaze canopy would be common to all the service models. The service variant also has TIALD head installed in the both FLIR and DLIR locations. Dual LPI flat array radar units are in the upper front fuselage and a single larger LPI radar unit is in the belly forward of the port landing gear. I also am working on a 3d model which is almost finished. 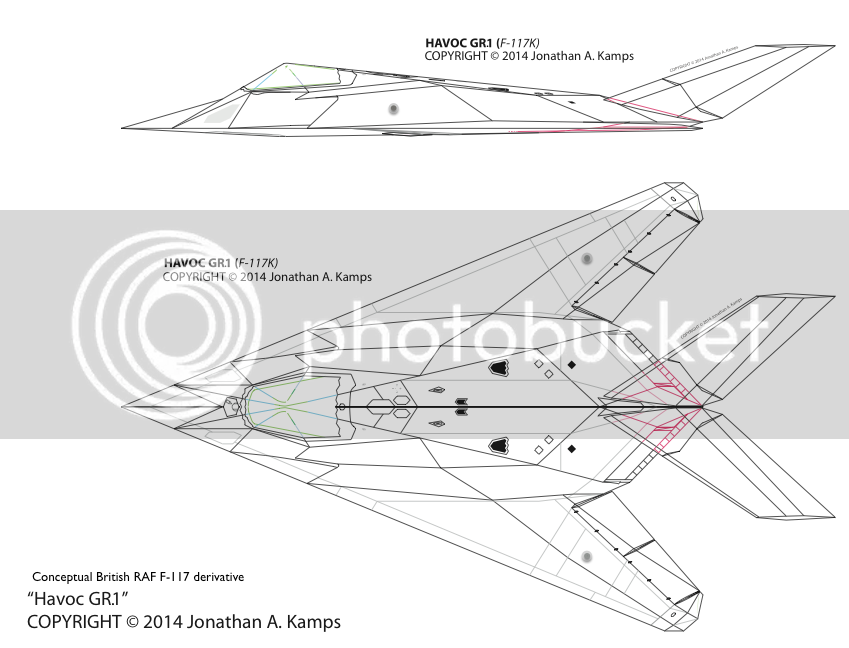 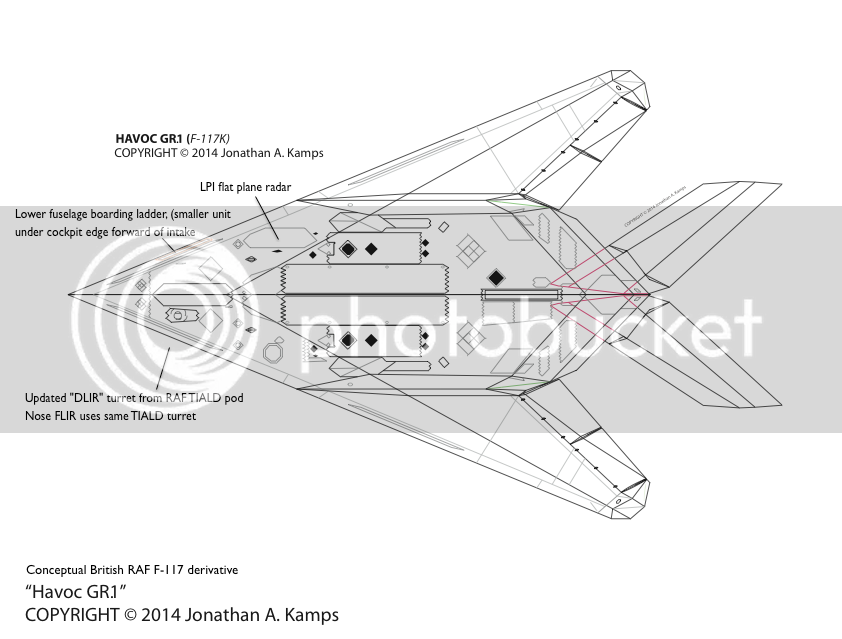 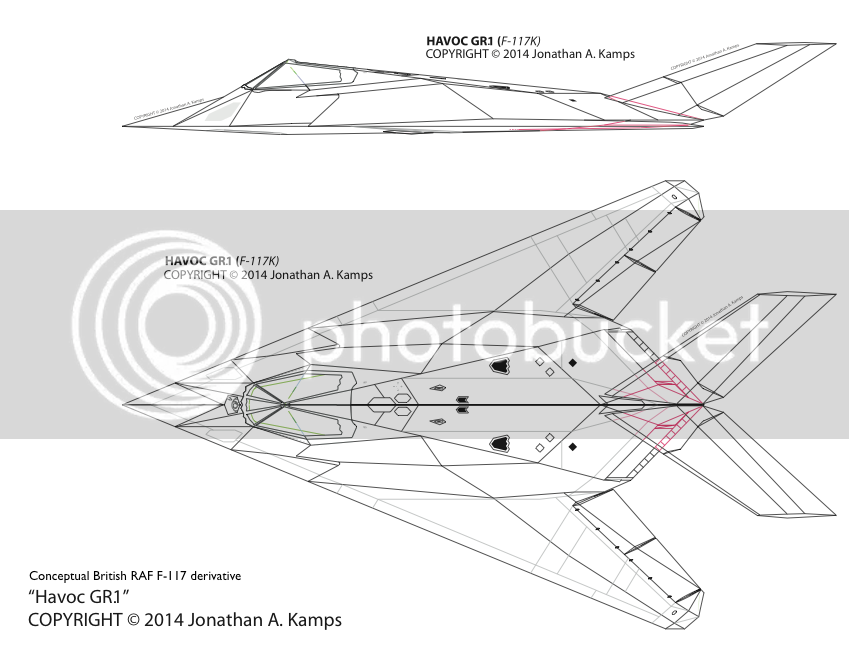 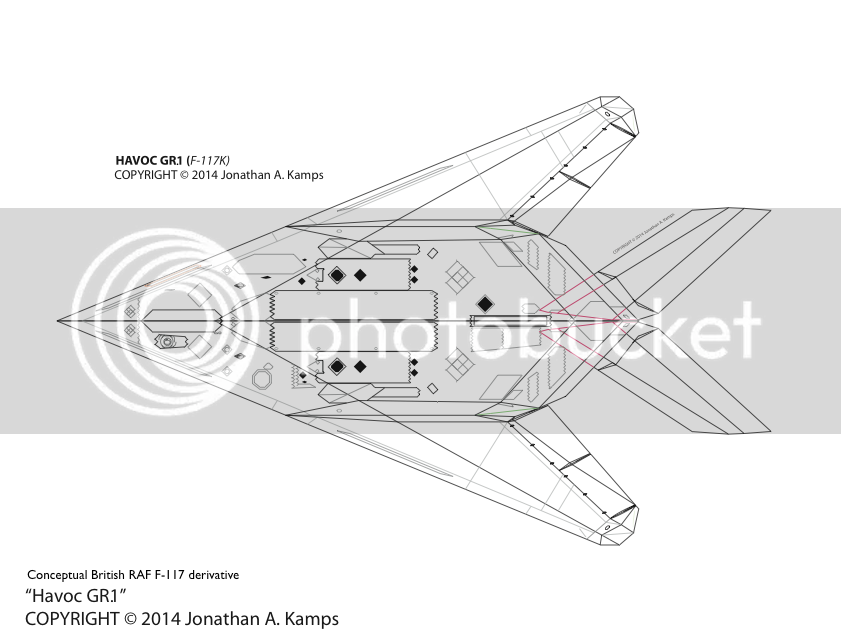 Thanks Paul BTW for redirecting things to a new thread, I didn't realize how old that other thread was.

I moved it because the Postwar Secret Projects forum section is for real projects. Your work here is your own hypothetical F-117 derivative. Better suited to here.
R

Thanks for the clarification!
R

I will state that while a British F-117 whatever form it would have been in, is an interesting thought as has been discussed elsewhere. My idea was for a variant that became a reality in secret, though Lockheed proposed an F-117 for the British in open literature in the 90s. I however personally don't think it would've been cost effective for the RAF to acquire an F-117. An F-22 would have been more attractive even though an F-117 derivative most likely have been much less expensive. Keeping a force of F/A-22s small however would help with the cost.
Also There is something named "Replica", I believe it was a BAE company concept for a domestic British stealth design. I don't know the details of "replica" and I specifically won't speculate on its proposed performance specifications, but if replica became a secret program there would not be a need for an F/A-22 for the RAF either.

Great stuff,thanks a lot for sharing.

Thanks!
I'll get the 3d model finished and an image posted of that. Not sure yet what the color(s) will be for the skin paint, still thinking about that and when I get the skin done I can post a link to a turntable animation of it.
Also I'm looking into seeing about getting fuselage parts 3d printed to make a quick model of it in 1/48 scale. I was going to scratch build it and maybe still will do that but it be easier to 3d print fuselage and wing parts though cost might be too high to go that route. Even 1/72 scale not sure what that would cost to do.

I wrote out a backstory to go with my concept design that in summery it dovetails a little off the open-source whiteworld proposals LM put fourth in the early 90s such as the navy variant and F-117A+ etc. I made a fictional backstory that put those 90s proposals as mid-80s concepts for an upgrade for the USAF that never materialized; but that one mid-risk development study became an in-house prototype later purchased and produced in limited number to serve secretly with the RAF starting in the early 90s.
H

In 1/72, printing the entire aircraft would still be several hundred dollars. It would be cheaper to use an existing F-117 kit as the basis and only print or fabricate the new panels.

Which program did you use to create the 3D model?
R

Started it in Maya but I'll be building it and texturing it in a different program instead, it doesn't need to have a lot of the features you can get with Maya.

I kinda figured the 3d printing would be expensive. I have a Revell kit I will use at some point to scratch-build it. Probably the best route would be just flat styrene sheet for the entire upper part cut and glued at the correct angles. Another possibility is build it out of alumium sheet, at least the upper part epoxy together, than use a vaccum table to mold styrene sheet over it, but I doubt I'd get the sharp edges and corners molded. I'd like to 3d print at least the canopy. I was considering vacum molding the canopy as well but that would be difficult as a low-tech vacuum table only has enough suction when molding larger parts, unless someone has suction molded small parts before. I was thinking some clear sheets glued together and than rounded off a bit and polished hopefully to remove the marks. Using the existing kit canopy pc would work except that it have to be laid back for the front angle and than clear peiced added to it to make it a little longer. The canopy is definately the most difficult part to scratchbuild.

Ever thought of doing a scaled up four engine version?
R

A medium range bomber with 4 engines and increased bomb load would be nice but I just wanted this concept to be a Nighthawk variant for the RAF, same bomb bay, same engines or possibly 412 or non-afterburning 414 engines. I conceive that there'd be an increase in internal fuel by redesigning some internal structure, along with lighter structures where possible. Newer engines might help increase the range somewhat over the original F-117 as well, but it would still be a fighter-bomber ranged aircraft-still less than the range of an FB-111. Basic structure similarity to the F-117A but with improvements and with British systems installed as a good percentage of overall avionics and other systems, possibly some British designed added stealth systems and structures.
Someone can correct me if I'm wrong but a single glazing canopy possibly weighs more than a multi-panel canopy? So even though some weight savings are made elsewhere designers would need to take the canopy weight into account.
I

Did you base your concept of the F-117C of this thread? :
http://www.secretprojects.co.uk/forum/index.php/topic,2952.0/all.html
R

If there is a close connection with my concept and the art from Illustrators John Ridyard, or Chris Davey, I would like to seek that out from them and then if there's a problem I'll remove this work. My ideas behind this concept come from thinking about the written info only regarding a British F117 and not any artwork. I also don't believe F-117C was ever officially the label but that it could be F-117B or F-117K or F-117+ all being likely designations for a supposed British F-117.
I went officially with Havoc GR1 for my concept even though its probably more likely it be Nighthawk GR1 or something along those lines, I just wanted to keep it separate from history hence the name Havoc. Again I went off of the info only for my concept-that of a variant with open intakes and all-glass canopy. I went from there with ideas based on that public info and didn't allow other ideas to bias my concept. I have only seen the artwork in Jon Lake's book but I didn't allow that into my design. I discounted the term "B-2 type intakes," as this makes no sense to me as the F-117 upper fuselage and B-2 upper fuselage are totally different. Applying B-2 intakes to my concept made no sense but ungrided serpentine intakes made sense for the F-117. The dogtooth in my design is not the same as the jagged edge intakes in Jon Lake's book. It should be fairly obvious that the concepts are very different!

I had a reason for the upper having the SINGLE large dog-tooth shape to it. My original concept ideas had parallel upper intake ledges(I can get those drawings posted) but very early on I also wanted the intakes originating farther forward; however the upper ledge of the intake then blocks view from cockpit and creates possible-(I'm not an electromagnetic engineer)-sympathetic radar reflections between upper intake edge and wing edge which could cause a scatter back to emitters. I haven't done a wind-tunnel on this thing but kinda think the dogtooth would help with airflow, though it could prove a disaster for the airflow as well. Cockpit is way different shape than any other F-117 idea and the intake boundary itself is partly under the canopy side. Again the upper fuselage shape, increased nose angles, reduced angle on rear wing edges, and larger & lower angle tail fins all differentiate the concept a lot. I put a lot of thought into this, it may have a lot of wrong thinking but its there nonetheless. I detailed it out in writing with back story but too long to post here and it put a lot of people to sleep probably.
R

I've been thinking about what an F-117 variant would be for a while before finalizing an idea, again inspired from info written about varriants released around 1995-96 in magazines, and also taken from my own initial drawings. It can be seen one of the ideas was to have the canopy completely covering the intakes. nice work
are you going to make a stl-file of your 3d-drawing?
please share
R

I plan to do a basic textured one or one of each both framed canopy and single glaze. I be happy to share renderings of them bothg. A more etailed model with gear and bomb bay doors and weapons will come later but first Ill do basic one first. I wish i could do envirnments easily but thats tougher for me to mess with.
R

bTW thanks for the kind words I apologize for the earlier post I was concerned that you thought I wasnt using my own idea for it. i want to reiterate that I qas just wanting to do a British f117 for a long time after reading an article a long time ago. Anyways this model is turning out a bit more difficult then originally. Planned so even the basic one is taking a lot of my spare time and ive had to revise the mesh several times already.
R