Found these images buried in my folders along with a screenshot of the (limited) information on these artillery pieces. It took me a while to track down which forum post I got them from (link and just in case, archived). 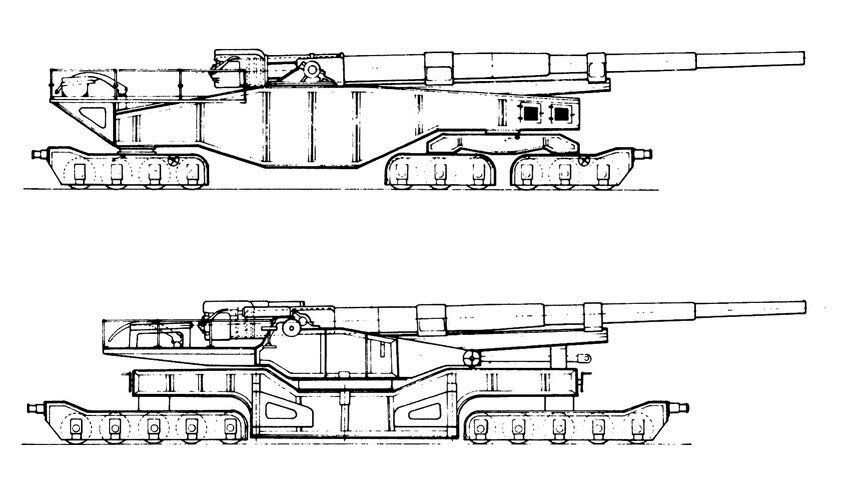 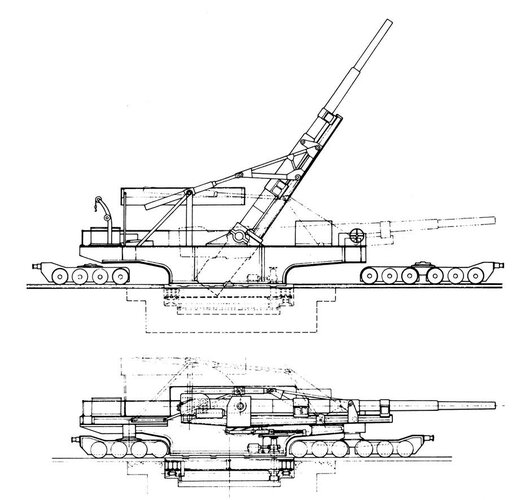 Quoted from the thread in question:

Well, as you know from the French rail road guns thread, I recently acquired a copy of John Batchelor & Ian Hogg's excellent (out of print) 'Rail Guns'. It covers only America, France, Britain and Germany, so no Italian or Russian artillery I'm afraid! However, those four nations were the main practitioners of the art of railway gunnery, so in that respect it's pretty comprehensive (as well as containing some quite drily witty writing by Mr Hogg). Where it is also comprehensive is in the dozens of excellent drawings, mainly profiles, by (one presumes, though several others are credited with help) Mr Batchelor himself. Having said that, the drawings posted below are not, one suspects, by him - they have the look of company schematics.

So, here we have a subject that, strictly speaking, falls beyond the purview of this forum, as the designs I shall briefly discuss were drawn up in the 1920s. However, they pretty obviously functioned as direct responses to the Paris Gun, so in that respect I shall hazard posting them here anyway...

At the fag end of the Great War, the world of artillery was pretty shaken by the Paris Gun (http://www.landships.freeservers.com/parisgun_history.htm) and, not to be outdone, both the French and British designed ultra long range systems of their own. Only the French actually went so far as to go to all the trouble to build such a gun, the quite extraordinary and characteristically baroque Pi�ces � longue port�e (L.P.) et tr�s longue port�e (T.L.P.) (http://html2.free.fr/canons/cantlp.htm):

Britain's War Office was also behind a design in 1918, which was apparently only done to satisfy Parliament that Britain could build such a weapon, not just the Germans. However, it never left the drawing board, and from what I gather was more a feasibility study than anything really detailed.

However, Vickers Armstrong (whose brilliant ballistician Sir Andrew Noble had done much pioneering work in the 19th century, including important investigations into hypervelocity guns in the late 1880s) continued working on ultra long range systems, and by the early 1920s had developed a number of design variations on the theme of a 24cm gun. The army weren't interested, however, and there was no chance in the cash-strapped and military-averse postwar era of actually building such extravagant systems.

Nevertheless, the drawings survive, though no data whatsoever is given with them. I have no idea of the length of the barrels, the intended ranges, or the muzzle velocity. What one can glean from the drawings below is that rather than going in for the almost Heath Robinsonesque tensioning trusses of the Paris Gun and its French imitator, the British intended to combat barrel-droop by using extraordinarily long gun cradles.

The first two designs show interesting variations on carriage type. The first carriage is a fairly conventional box-girder design, with little evident traverse capability. The second carriage, on the other hand, is a rather incredible dual-level affair, in which it appears that the upper section can traverse about a turntable built into the upper part of the lower section:

The next two drawings are of one design. Rather after the pattern of the Paris Gun, this seems to feature a turntable which must be emplaced in a specially dug pit, with the carriage then bolted to it and the bogies removed. Where it departs radically from its German progenitor is, first, the use of the long cradle; and, second, the utterly bizarre system of (hydro-pneumatic?) cylinders and levers used to elevate the barrel:

More research could do with being carried out in this area...
Click to expand...