That, and the giant steam-powered mechanical spiders.

Hey I like my "Gangsta Rap's Greatest Hits". On the original cassette, thank you. ;D

XP67_Moonbat said:
Hey I like my "Gangsta Rap's Greatest Hits". On the original cassette, thank you. ;D
Click to expand...

Pssshhh. If you were truly Olde Skool, you'd have it on 8-Track. Poser.

Watch out for those clouds of dihydrogen monoxide.

Triton said:
Watch out for those clouds of dihydrogen monoxide.
Click to expand...

And the canned food. 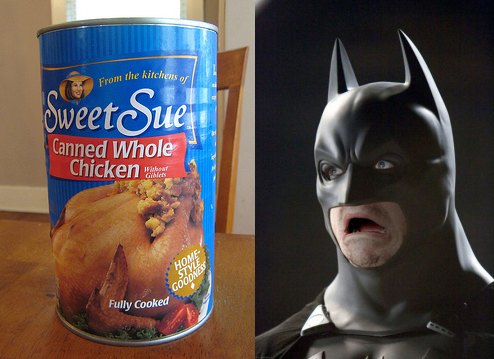 Triton said:
Watch out for those clouds of dihydrogen monoxide.
Click to expand...

And the canned food.

"Southern food" and I have had our issues. Two things that immediately spring to memory:
1) Wherever I went in "Dixie," the milk tasted like... pesticide. First noticed this on a family vacation trip when we stopped in a McDonalds or some such, and had a carton of milk. Bleah. Let my parents taste it... they tasted the pesticide as well. Then had the staff taste it... they didn't taste it. I guess it was normal.
2) On a business trip to Huntsville around 2003, I ordered Ice Tea. How can you possibly screw that up? Here's how: one billion parts per million of *sugar.* Had so much sugar in it it was *gritty.* Soon came to realize that "ice tea" was the default name for "sweet tea," which is the euphemism for "diabetes in a glass." Already being a diabetic, I didn't think too highly of it. Nor did I think highly of having to argue to *not* have a pound of sugar dumped into my glass of dried leaves in water.

I lived in Lufkin, TX for several months years ago. Their water is so bad it ruined the taste of anything you put it in. I made the mistake of filling the bathtub up once and it had this brownish tint. Needless to say I stuck to showers so I could at least pretend that was clear water coming out of the tap.

I'm rather disappointed by the link. I was hoping to see a bunch of Mormon's riding a mechanical steam-powered spider. :'(

Great genealogists, though (even if spiderless).
A