In 1966 the Long Range Objectives Group drew up a number of designs for fleet flagship. These ships were expected to have small superstructures, and flat decks with antenna farms similar to the converted light carriers Wright and Arlington.

However Opnav desired "ship schemes which are handsome and impressive in view of the intended mission of the ship. Such ships, with relatively large conventional cruiser superstructures, will have less than optimum communications performance and will be shorter and less impressive than the small superstructure flat deck.

Therefore two basic alternatives were considered:
or
The other alternatives were:
All ships were to have 2 lightweight 5"/54 guns, 2 twin Mk 32 torpedo tubes, ASROC, SQS-23 Sonar, protection against atomic blast and STOPS chemical warfare protection.(although this last point is immediately contradicted later in the text.)

A ship with the large superstructure, COGAG, BPDMS and without STOPS displaced 12,300 tons, and had a length of 626ft.

The AGC was ruled out due to lack of mobility. The Terrier ships were not worth modernising, and the Talos ships would require considerable work to remain effective as an AA platform and it's dual-purpose would interfere with its role as a flagship. Converting an aircraft carrier would not address the lack of antennas, and the structure inside the hangar would displace 9 Phantoms. Converted gun cruisers would have a limited service life. The new construction purpose-built designs with BPDMS would lack the necessary self-defence capabilities to operate without interfering with the ship's freedom of action.

In 1969, the Navy wanted to build 4 Blue Ridge AGCs and 6 specialised fleet flagships.

However the scarcity of shipbuilding funds due to the Vietnam war prevented any implementation of this plan. Alternatives such as redesigned AGCs, 30 knot auxiliary-type fleet flagships without missile armament, converted light carriers, or auxiliaries that could accommodate fleet or amphibious staffs (which would reduce the total number of flagships required to 10) were also not pursued.
Last edited: Jan 11, 2021 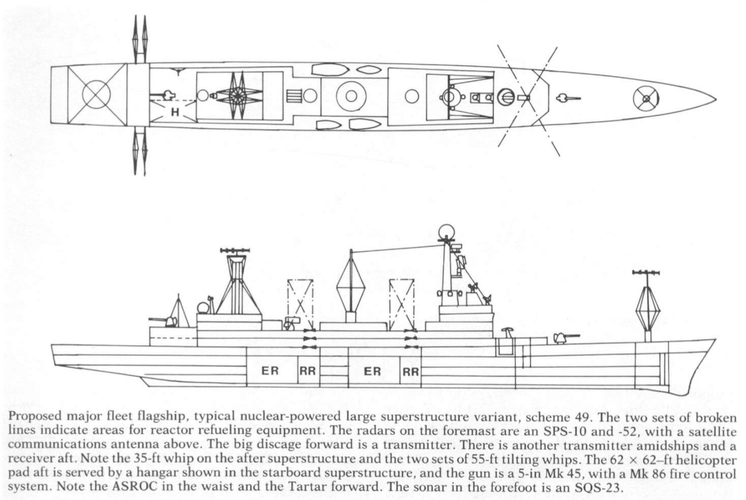