This is a projects:

1) Single seat, fighter. The motor is located behind a back of the pilot, and the pushing propeller is placed behind a fuselage. The threewheeled landing gear. In a nose the powerful arms is located. Radiators of tunnel type are placed in the bottom part of a fuselage, ahead of a wing.

2) Single seat, fighter. The motor is located inside of a fuselage, behind a back of the pilot, but the propeller is born in a tail part and placed behind of plumage. The arms is located in a forward part of a fuselage. The threewheeled landing gear.

3) Single seat, twin engined, fighter, executed under the scheme, named "bat ". The fuselage completely is absent. Motors are located a tandem and result in rotation two coaxial propellers. By a photo, the plane is armed, at least, by four guns and, probably, several machine guns.
The threewheeled landing gear.

4) Many-placed attack aircraft with two motors of air cooling. The plane has the powerful arms located in a forward bottom part of a fuselage, in a back part and in a tower placed behind of pilots. The threewheeled landing gear.

5) Two-engined bomber. Motors of liquid cooling are located inside and by means of a drive rotate two pushing propellers. Such arrangement of motors demands application three-wheeled the chassis for protection of propellers on takeoff and landing.

6) The plane of type "duck ". The motor is located behind a back of the pilot, and the propeller is taken out back. In a forward part, under the stabilizer, the arms is placed. In the bottom part of a fuselage are visible entrance and exhaust outlets of a tunnel radiator.

What source do you have?
Are they real or just a what-if in someones mind.

Those fighters look very Northrop in style to me while 3 looks like a mid-40s design. Number 5 looks very much like the Bell YFM-1Airacuda re-worked.
S

No 1 Vultee XP-54?
No 4 Northrop XP-56 with elements of Japanese Shiden?
No 3 looks familiar. German project?
As Hood asks, where from?

Devi, any hint they are related to the R40-C competition?
J

the "bat" design could be the "Manta" .I don't remember the manufacturer but there was an article in Luftfahrt magazine and the thing went up to the mock-up stage. the Bat is the unofficial nickname for the XP-67 twin. It is early wartime and was stopped circa 1942.

I answer about the 3 twin-boomers, all included in my E-book "Forked Ghosts":
3) is the Davis "Manta" or "Bat". With several 3-views in the booklet Unknown No.4 sold at http://www.luft46.com/rd/rdreams.html
1) was called "Snipe" in the art photocopy I had (from Airpower?)
5) is the Northrop/DDMDAL "Shrike", probable forefather of the XP-61.
C

Here's an illustration of aircraft #3 in devi's intiial posting. It is indeed a Davis Manta, (the first of two versions of this aircraft.)

The illustrations are by J. Miranda, and the source is:
UNKNOWN! (4)
Authors: J.Miranda & P. Mercado
Publishers: Reichsdreams Research Services

(6) looks a lot like what I remember seeing of the Vultee entry in competition with the Lockheed's P-38 design.

Apart from the blended wings, No.3 looks a lot like the SNCASO SO.8000
Narval, which itself was based on a Focke-Wulf project AFAIK ....
A more conventional wing for easier production ?

Jemiba said:
the SNCASO SO.8000 Narval, which itself was based on a Focke-Wulf project AFAIK ....
Click to expand...

I have never read that, nor seen the related Fw... According to the Narval mongraphy in Le Fana de l'Aviation, the Narval came from a preliminary French design by Ingenieur Dupuy, without any professional support at first, during occupation of France. Could you find again your own source?
L

The illustrations shown by Devi are re-drawn from an article
in Wings/Airpower of September 1972.
Title: Diagraming the Dream Planes" by Walt Boyne.

As the title says - dream planes- artist concepts not based on
real designs,giving an idea how future war planes could look.

The illustrations are not related to manufacturers
but the several artists give an impression how they see the future.
(based on the technology of the day ,late '30s early '40)

It was a pleasure...

"Could you find again your own source?"
It was a book written by F.C.W. Käsmann about "the fastest propeller driven aircraft".
Sorry, I have this book not in my bookshelf any more, so I don't know the exact title,
but the author. It is several years ago, the time when my deeper interest in te french
post-war aviation began and when I was desperately looking for sources. As there was
just a photo of the Narval from behind, I was even considering to buy the "german secrets
project" series, before browsing through the fightervolume in the book shop showed me,
that the Fw project wasn't mentioned there ! But I think, I found it several years later,
when I had entered the world of the internet, in Luft'46 ! But this time, of course, I didn't
need it any more for the Narval.
And you're right, Cuny didn't mention any relation to a Focke Wulf project, too. So I
won't insist on this assertion.

But perhaps we should have a "quarantine section", where drawings can be posted,
which may be are just fantasy, or photos which may be fake ?

Of course, Fw like many others had designed such twin-boomers, and the one you presented was studied in June 1941, but I think this is not enough to say there is a relation to a derivative.
Or this Fw would itself "be" a SAAB J.21 (March 1941) derivative etc. Only famous designs or official patents may inspire designers, secret projects revealed years later were not a source at that time.
Thanks anyway for the details on your precise source.
S

Thanks to Lark. Funnily enough, a copy of Airpower Sept 1972 has surfaced during my unpacking! In the article Boyne compares features of the artist's impressions with some later aircraft which actually saw the light of day (XP-54, XP-58, P-61 etc and an 8 engine dream compared to B-36). One feature lacking from most of the 'dreams' was any provision for engine cooling. The interesting thing is how close some of the 'dreams' got to the real submissions to R40C call for proposals which led to these real aircraft. Or were the proposals inspired by the 'dreams'? The artwork in the Boyne article is distinctly better than from Kasmann.
L

The most enigmatic desin in this article is the so called Flying Whale bomber.
In many publications it is labelled as a Martin design but in this
aticle it is only mentioned as resembling the XB-16....
J

devi said:
This is a projects:
Click to expand...

can you identify those projects ?.
L

The Deutsche Sportsflieger article from September 1942 is usually reproduced with the end part missing. Here is the complete version from the WWII Press website:

That multi-engine bomber has previously been identified as Material Division Design 361, an internal study created by Air Materiel Command staffers. It's presented in the replies to the forum entry under "Martin XB-16 and XB-16A bomber projects (Model 145)". It's likely that most of the rest of these images had the same origins. 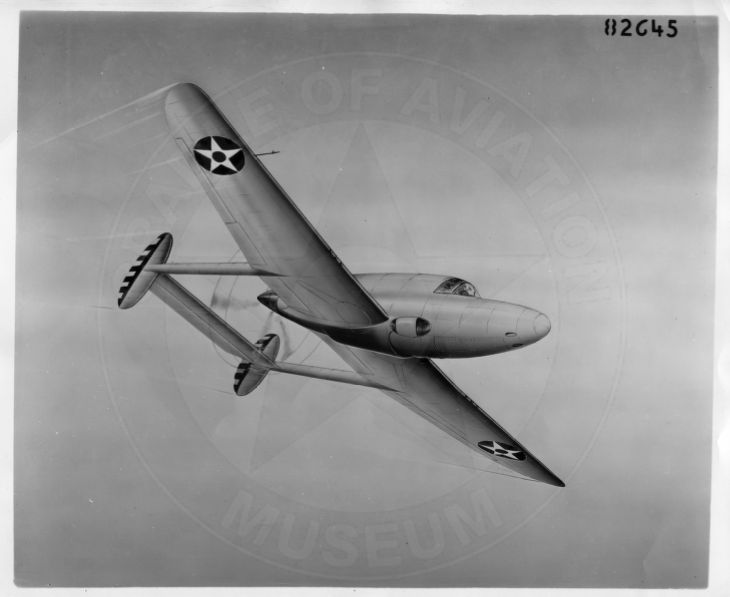 cdm16694.contentdm.oclc.org
If this is the wrong topic or these pictures have been posted before, please let me know.
R

Here's an illustration of aircraft #3 in devi's intiial posting. It is indeed a Davis Manta, (the first of two versions of this aircraft.)

The illustrations are by J. Miranda, and the source is:
UNKNOWN! (4)
Authors: J.Miranda & P. Mercado
Publishers: Reichsdreams Research Services

During WW2, several American magazines (e.g. Bill Barnes Air Trails) published photos of a Davis wind-tunnel model with a Manta wing. The wind-tunnel model had a single tractor propeller and a full-length fuselage. No prototype was built and Davis dropped that proposal part-way through WW2.
The Manta planform was one of Davis's efforts to optimize wing aerodynamics.
Davis was more famous for designing the semi-laminar airfoil for the B-24 Liberator bomber. Low drag gave the Liberator a considerably longer range than its Boeing B-17 stable-mate, so long that the RAF used most of their B-24s to patrol the mid-Atlantic Ocean.
R

SNCASO S.8000 Narval and SAAB J.21 are among the few twin-boom pushers to properly understand airflow where wing roots meet the fuselage.
Note that both their fuselage cross-sections are parallel through the wing root. This minimizes the chances of turbulence.
In comparison, Spitfire, etc. needed massive wing root fairings to smooth airflow.
P-51 Mustang and Douglas AD-1 Skyraider did it the easy way with square fuselage bulkheads, constant section all the way through the wing root. Most post-war light singles copy the Skyraider's simple aerodynamics.

Narval and J.21 also use wing sweep to balance the heavy engine.
A

I don't believe that the above artwork had anything at all to do with Brewster. Clioman, in fact, is exactly correct.

Rather, it was one of a series of color and black-and-white art pieces done by that division of the Materiel Commend showing what was believed to be the "cutting edge" of aircraft design at the time. As with much of what the Materiel Command came up with, copies were distributed to various manufacturers to give them an idea what Materiel Command was thinking new aircraft should look like. As a result, people find copies of this artwork in various company files and archives and believe it was created by that company. NOT TRUE, but also not surprising given the relatively low level of professionalism and thoroughness among many, many "researchers", who appear to think that finding a drawing or a picture is the end of the research trail rather than it being just the start.

I have what I believe is a pretty complete set of all these drawings and will, at some point, try to post them here. I believe this overall topic has been discussed here in the past as well.

You're doubtless right, Alan, but it does bear a striking similarity to the Brewster Model 33A so I can see how even a professional might make that mistake if they were unaware of the Materiel Command artworks (I certainly was).

All Info is here;

It is possible that Brewster used the Materiel Division artwork as inspiration for some design proposals. After all, that was exactly the purpose of the MD in sending them out - to inspire designs that reflected what the Materiel Division thought were "cutting edge". Besides, there are only so many airworthy configurations - and variations on those configurations - that an aircraft can take.

And in closing, I did the drawings of the Brewster (and other) proposed aircraft configurations in American Secret Projects Vol I. To be honest, it was fairly easy to see why so few of them got beyond the proposal drawing stage.