Painting recently found listed on eBay with no useful background. Does anyone have any info on it?
The artist is R.G. Smith, house artist at Douglas Aircraft, and it looks like his style so I assume it represents a Douglas concept. Douglas explored all sorts of exotica over the years - WIGs, composite aircraft, blimps, troop-carrying rockets - but I don't think I've ever before seen a Douglas design with rotors.
Its an odd animal and looks a little half-baked so I suspect that it was more of a concept than design into which much work had gone. Just based on the configuration, shape and paint job, I'd date it in the early to mid-sixties. It's reminiscent of the Fairey Rotodyne morphed with an A-3 Skywarrior.
- It looks to me like the center of lift for the rotors and wing are displaced by quite a bit. Maybe the passengers, sitting behind the odd Greyhound-bus windows, had to move fore and aft between flight modes.
= There's no hint of how the rotors are driven - no sign of engines in the fuselage, except for a gap in the windows in the forward fuselage, or any sort of tip jets. I don't know what sort of engine would fit in the nacelles depicted.
- The windscreen looks optimistic
- The wing looks improbably thin 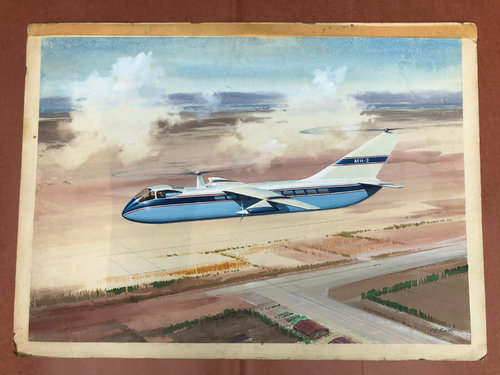 yeah, several things seem geometrically impossible (super thin rotor pylons, for example). Anyway, i'll bite. What if the wing engines were GA-type flat-sixes? it looks like there are inlets on both sides of the spinner.

Judging from the placement of the windows, I'd say that there is supposed to be one engine for the front rotor between the cockpit and the cabin, and another one just aft of the cabin for the rear engine.

Unless it is an autogyro, of course.

Could be a flat six or maybe those intakes are for twin turboprops, the dark blue area of the nacelle looks like a tube - i.e. intake and exhaust aft, the lighter blue section perhaps housing the undercarriage.
If so that would make coupling the engines easier but you still need an awful lot of cross-shafting.
Judging by the size of the pilots, passenger capacity would be about 18-20 for a 1+1 abreast layout, possibly 54-60 if its a 2+1 (but the fuselage looks quite narrow).
Feels less efficient than a Rotodyne to me, probably similar era though, the styling screams 1950s.

Likely just an idea visualized? Since there does not seem to be any other information about it, it might not have even made it to the draftsmans boards once all the challenges were talked through. No real parameters (like wings and rotor size). First thing I thought was an idea to be a competitor to the Rotordyne.

This really looks like just an artist's impression to illustrate a concept. Any idea what the MH-3 on the tail stands for?

Charlesferdinand said:
This really looks like just an artist's impression to illustrate a concept...
Click to expand...

It does indeed ... but, keep in mind, that Robert Smith started his career at Douglas as an Aircraft Configuration Engineer.

Hood said:
Feels less efficient than a Rotodyne to me, probably similar era though, the styling screams 1950s.
Click to expand...

I always thought that the baby-blue airplane paint jobs originated with Jackie Kennedy's remake of Air Force One in the early 60's and were a early-mid sixties look. For a while it seemed that there was an FAA rule requiring light blue on business jets. TAC joined in in the mid 70's with the F-15 (air-superiority blue) but the USAF has always lagged behind the latest styles.