These projects date back to the beginning of the 20th century when many warship experiences and design concepts were developed. Neither proved to be viable. There is little information about these projects and in one case it is only possible to speculate on certain specifications.

The first one is the ‘Aircraft Parent Ship’ that was designed by William Beardmore & Co in 1912 for the British Admiralty’s Air Department. It was probably the first Aircraft Carrier design ever, but it was for a hybrid of a destroyer tender and a carrier for seaplanes and aeroplanes. The hull was based on the first british ‘dreadnought’ battleships type design but it’s not quite clear if the intention was a conversion or a new project. There were two islands, one in each side with a bridge structure connecting them where lied the commanding facilities. Each island housed three planes, the first hangar housed four and the second hangar six seaplanes disassembled. The lift conect the first hangar to the landing deck. In bad weather conditions the deck between the islands could be covered.

These were the available specifications: 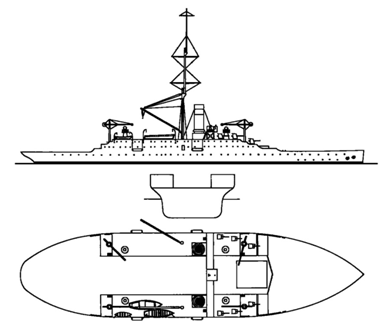 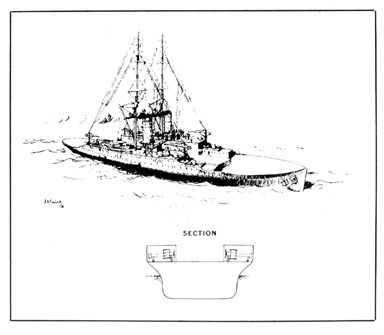 The second one is a little more unusual. Vickers Design nº 128 was described as a ‘Swift Ship for Carrying Submarines’. The year wich this design was developed isn’t available but the sequence of Vickers design numbers suggests 1904 as the probable year. At this time Vickers had the monopoly of the Royal Navy’s submarine design and contruction and probably worked as an agent of the US Eletric Boat Co. wich had the ‘Holland’ submarine patent and was also interested in expansion of the submarine sales. Design nº 128 was an enlarged version of the torpedo-boat Carrier ‘Vucan’ built in 1889 in a protected cruiser’s hull. Design nº 128 used an armoured cruiser’s hull and as ‘Vulcan’ she probably could have carried the submarines on her deck and had repair workshops and equipament stores. ‘Vulcan’ suffered some structural problems and her hull had to be strengthened to operate her two big ‘goose neck’ cranes. It’s probable that Design nº 128 used a bigger version of this kind of cranes, afterall an A1 submarine was almost ten times heavier than a torpedo boat. This could explain a displacement similar to the 1st class contemporary battleships. The possibility to carry the submarines in the sides of the ship was impratical for the projected speed. Design nº 128 had the following specifications:

The images below of the ‘HMS Vulcan’ could indicate the probable appearence of the Design nº 128.

Specifications of the 'HMS Vulcan':

The A class submarines from 1903 has the folowing specifications: 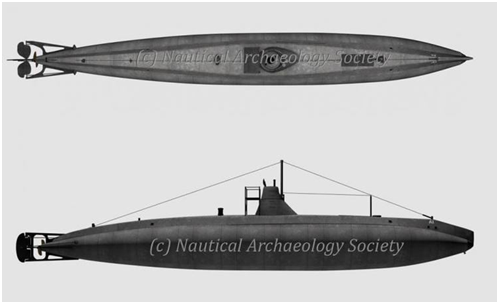 Sources: Archives of the ‘National Maritme Museum’; ‘British Cruisers of the Victorian Era’ – Norman Friedman and ‘All the World’s Fighting Ships 1860-1905’ – Conway’s

I'd be grateful if you could enrich this text with more information.

The first design is your typical 1st generation experimental seaplane carrier with a unique twin "island" arrangement. I think in one of the British Carriers books it was mentioned as well, will check later but that variant maybe had a ramp aft as well but I'm not sure.

The secodn sounds like a hybrid Submarine Depot / Transport Ship again a first generational experimental proposal to serve the early submarines. I think the Submariens were not that (10times) heavier then torpedo boats when transported and without the ballast water which increses their displacement considerably.

I have never come across Design No.128 before. It certainly sounds an interesting design, probably as a means to overcome the short range and slow surface speed of submarines by carrying them to their patrol positions as part of a defensive/scouting screen ahead of the main fleet. This would also account for the heavy armament in case it met with the enemy screen.

I have my doubts that the design would have been directly based on Vulcan. Vulcan was a much older ship and was not a Vickers product, but was designed by William H. White not that long after he became DNC in 1885. I would agree though that the final design must have been very similar in concept.

The Clydeside shipbuilding firm of William Beardmore took theory a step further in 1912 when they proposed the
construction of an ‘aircraft parent ship’ to the Admiralty. It was clearly intended to be a mobile base which would anchor
in coastal waters rather than operate as a part of the battle fleet. It featured a long through-deck with workshops and
hangarage on either side of it connected, over the deck, by a bridge from which both ship navigation and flying operations
would have been controlled. The through-deck was level and ran for the full length of the hull, intended to allow
convenient access for the aircraft between the hangars, workshops and working decks. In calm conditions, take-off into
wind from the deck forward of the flying bridge might have been possible, but any attempt to land on the after deck, into
the turbulence caused by the bridge structure and funnel gasses, would have been extremely hazardous. Booms would
have been used to move aircraft from the deck into the water for flight and to recover them after landing. Wireless
telegraphy (W/T) aerials fitted to tall masts would have allowed long-range communications commensurate with Admiral
Fisher’s concept of a ‘Flying Squadron’ of reconnaissance vessels and battlecruisers able to deploy to considerable
distances from the UK to seek out an enemy force and destroy it. Rather broad in the beam, it would not have been a fast
ship, and coal-fired boilers would have produced copious amounts of smoke and soot. With no experience of heavierthan-
air aircraft operations, the Admiralty decided against placing order for such an experimental ship, but it provides an
interesting starting point for the study of British aircraft carrier design.
Click to expand...

And the very first "modern" aka fixed wing aircraft carrier design in my opinion goes to Russia a 1910 proposal to convert the Monitor or Ironclad Admiral Lazarev into a small aircraft carrier! 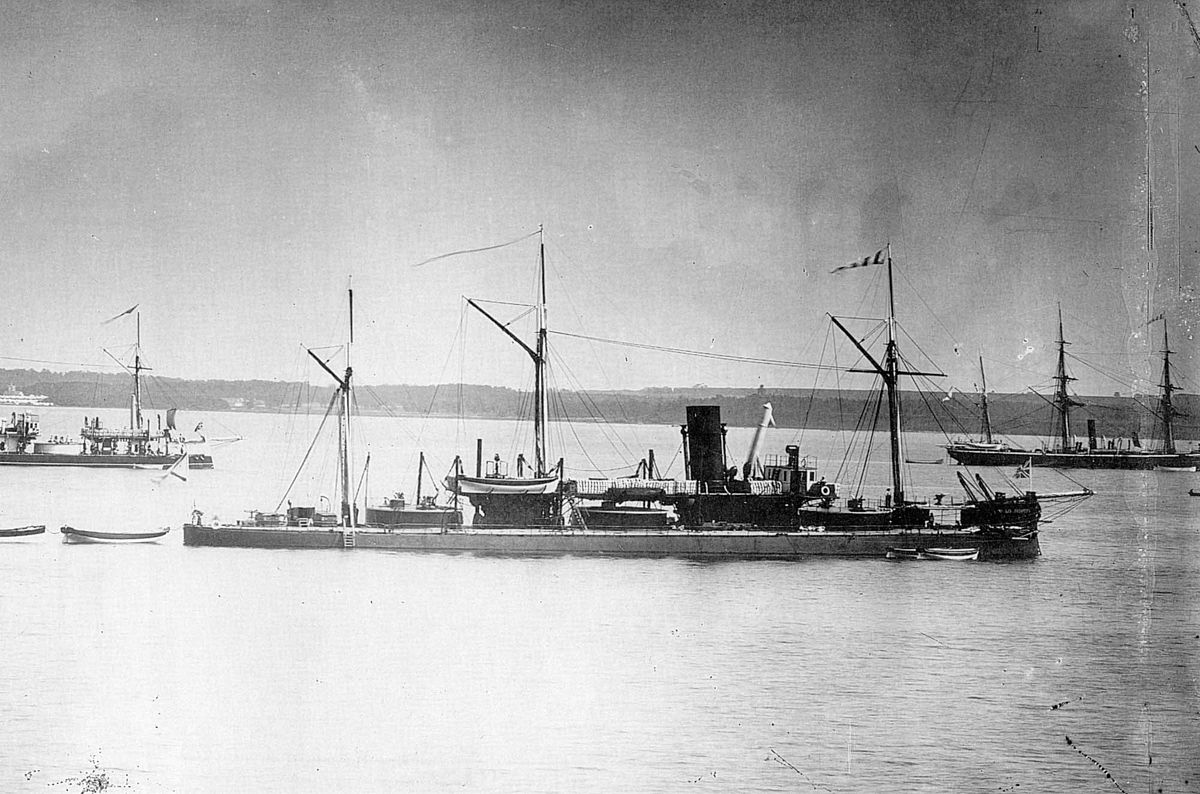 There is an artist impression too in a Hungarian book I will attach later.

Could Design 128 be a dock type ship?

Would 510ft long and 77ft wide allow for a dock able to hold two A class?? 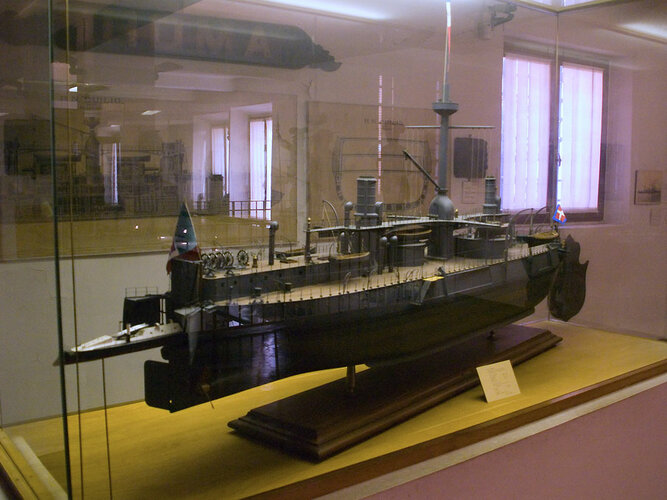 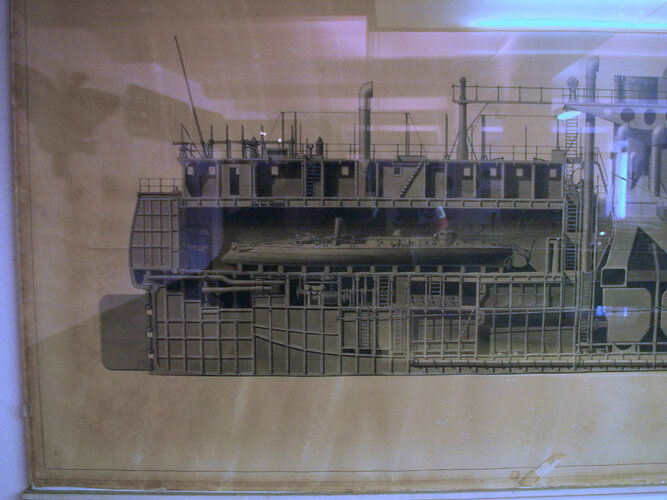 Later on, the French had the SS Kanguroo. 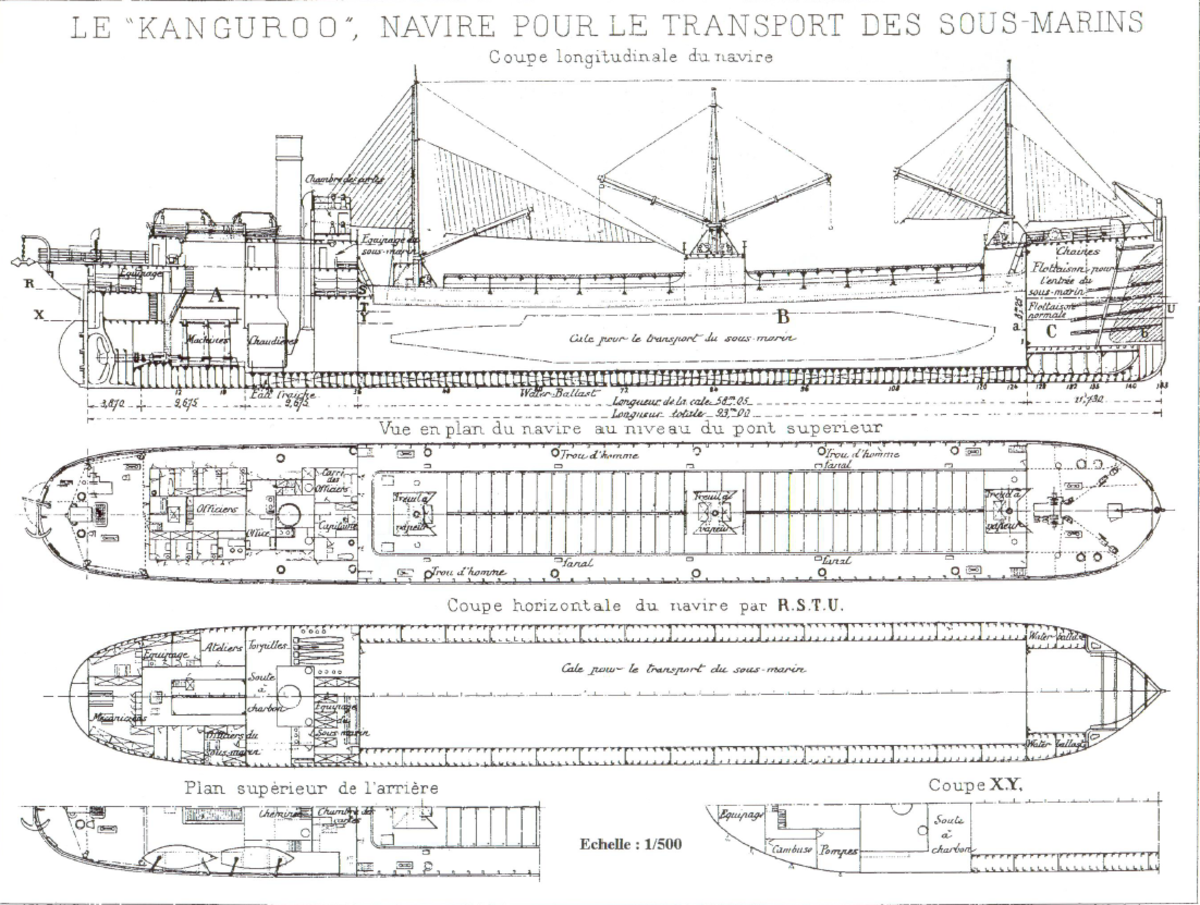 It would also explain a curious feature that I noticed yesterday, that the ship has a twin 9.2in turret forward but two singles aft. That becomes obvious when you assume there was no space aft for a barbette (or a turret if the subs are on deck) so sided deck-mounts had to be used.
P

It would also explain a curious feature that I noticed yesterday, that the ship has a twin 9.2in turret forward but two singles aft. That becomes obvious when you assume there was no space aft for a barbette (or a turret if the subs are on deck) so sided deck-mounts had to be used.
Click to expand...

I did wonder about that bit as well.

I am assuming it is down to a submarine handling area but how the submarines are handled is a puzzle....190 tons seems to be a bit heavy for a shipboard crane or derrick at this time, it was around the 1920's that the heavy lift Bel class with their 125 ton derricks came into service.

Agreed, even SMS Cyclop was later than I thought (1916).
But an arrangement like a whaling ship might have worked with an inclined ramp.

Of course it could be that Vickers was going to design a smaller submarine especially for the ship.
P

Tzoli said:
And the very first "modern" aka fixed wing aircraft carrier design in my opinion goes to Russia a 1910 proposal to convert the Monitor or Ironclad Admiral Lazarev into a small aircraft carrier!

There is an artist impression too in a Hungarian book I will attach later.
Click to expand...

Was theer any more information on this, 262ft seems quite short for a flight deck carrier rather than a seaplane carrier.