Since late 80s Turkey is very active on various missile/ rocket projects. I will try to create a list various old and new projects


2. XHAR-90 was 90 mm non reuseable antitank rocket. Developed by TUBITAK SAGE It was similar to 66mm LAW which are still being built by MKEK

3. UMTAS/MIZRAK-U developed by Roketsan for T129B ATAK Helicopters. It has IR Seeker with radiolink update. Recently entered production. It has 8 km range

9. TEMREN: Mysterious missile used in SeaHawk helicopters in Navy. No information is available, could be long range UMTAS derivative.

4. A unknown rocket system proposed to USMC in early 2000 from Roketsan. Could be related to MPIM/SRAW project

2. LGK: new generation laser guidance kit for Mk series bomb, instead of bang-bang guidance like the one in Paveway-II; it has propotional guidance system. Last year Turkish Airforce ordered 1400 LGK Kit. Both Mk84 and Mk82 kits as well as NEB 2000lb Bunker Buster Kits in production

There is recently qualifed laser terminal guidance for HGK Series; HGK with semi active laser seekers called "L-HGK" so we have also

4. KGK Series. It is wing kit and guidance kit is identical to HGK series guided bomb.

The wing kits gives up to 110km range, basically a very good stand off range beyond most airdefence system's range

6. SOM Family; light cruise missile family which is under production for Turkey and allied countries. Developed by TUBITAK SAGE and produced by ROKETSAN. It has range around 300km.

Devloped by ROKETSAN and SAGE. The missile family consist of both IR and Radar guided variant. To be operational following years. Details unknown.

4. Gezgin: Turkish cruise missile for Navy and for ground launchers. It has been underdevelopment for years, it is estimated that it has range around 1000km

5. Atmaca: Turkish antiship missile with TJ. Probably it has more than 200km range, with multiple seeker and datalink options. Test fires continue; inital production will be in 2018.

6. Kargı: Turkish Anti-Radar Drone. It has both passive radar seeker and FLIR. Probably it has light weight piston engine, similar to IAI HAROP

Yildirim-2 missile which is informal name; turn out to be Bora Missile; for export it is called Khan. It is offered to Poland and several MidEast nations. 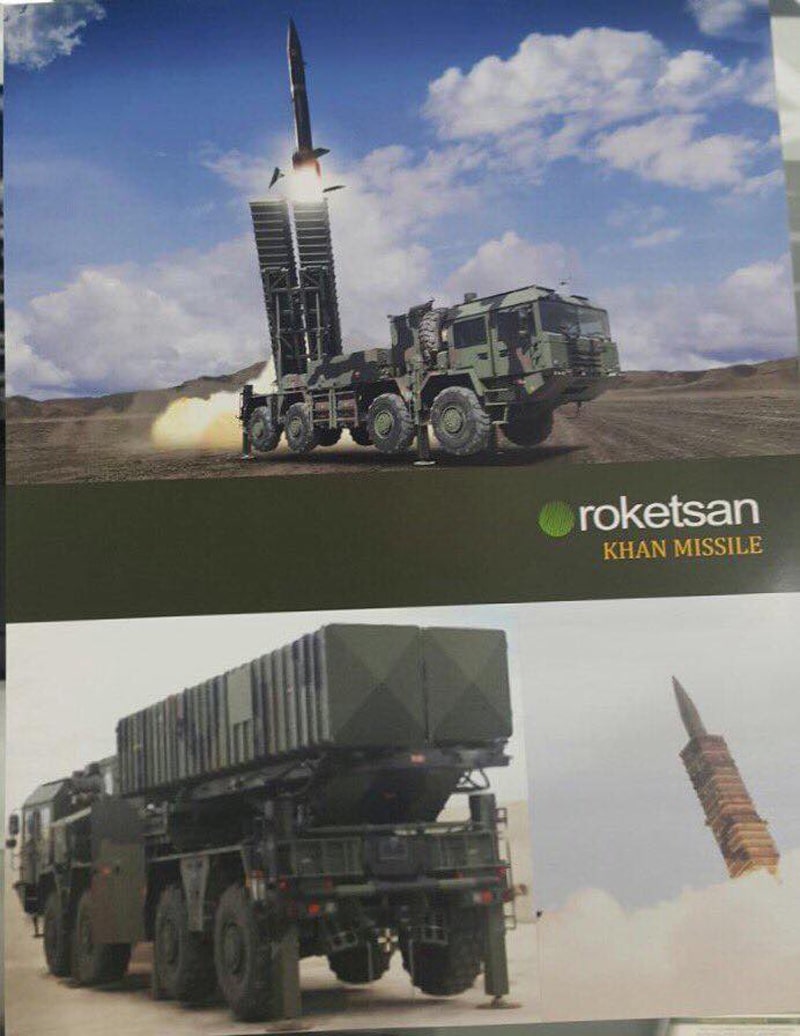 Project-J: 150km class Balistic Missile turn out to be Yildirim, 220km range J+ missile entered service.
Project-K: 100km class MLRS turn aout to be Kasirga, now 120km K+ Missile entered service
Project-L: 300km Class SRBM, initially co development with Ukraine considered; but it has been cancelled due to high cost (the Project evolved as GROM Missile). Instead of Project-L, Project-B launced ant it's turn out to be Bora Missile (360km range, where as Khan is export derivative 280km)
Project-M: 500km SRBM, with cooperation with Pakistan, a missile system based on Shaheen Missile. There is no information available on Project-M. Most likely cancelled.

It will be interesting to see how this will affect current and future programs.
O

So some nonsense desicion is coming..
O

Here is the first illustration of Goktug Air to Air Missile Family.

ASELSAN MB is a kind of Small Diameter Bomb

ATMACA Anti ship missile. It has around 250km range, It has Active Radar, INS/GPS, Radar Altimeter and Datalink.
O

Some Update of existing and future air defence systems. 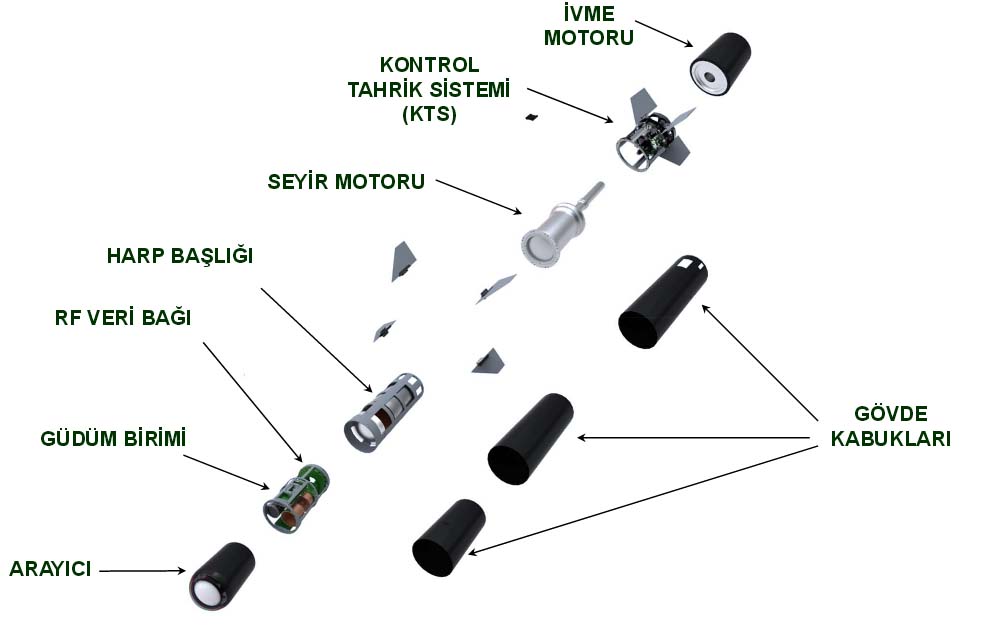 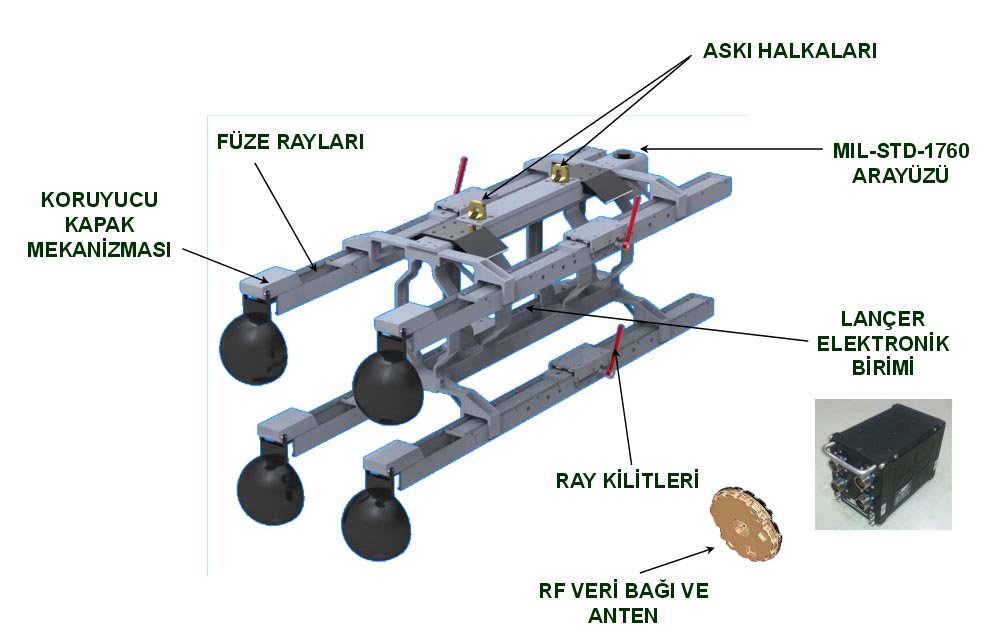 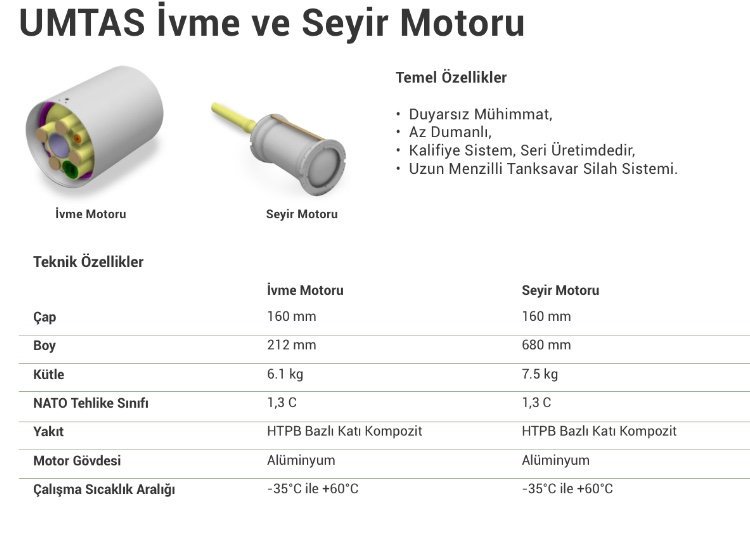 The datalink kit consists of

Roketsan developed and produced a National Man-Portable Air Defence System (MANPADS) through national resources to replace the Stinger POST (FIM-92B) and Stinger RMP (FIM-92C) MANPADS in the inventory of the Turkish Armed Forces (TAF). Dubbed as PORSAV, the National ManPADS is a fully autonomous ‘fire and forget’ missile equipped with a two-stage (booster motor and sustainer motor) solid propellant rocket motor and features Aselsan’s cooled Imaging Infrared (IIR) type seeker head (believed to operate in the three to five-micron waveband). The PORSAV is expected to be effective up to the altitude of 4km and a range of 6km+. The missile is believed to be armed with a 3kg high-explosive warhead (as in the case with Stinger missile) loaded with tungsten ball projectiles.

As the lowest level unit of Turkey’s layered air and missile defence capability the PORSAV has been undergoing development since 2013. According to Turkish Minsitry of National Defence (MoND)’s 2016 Activity Report in order to meet Turkish Land Forces Command (TLFC)’s requirement Portable Air Defence Missile System (PHSFS) Project Contract was signed between the MoND and Roketsan on September 10, 2013. The PHSFS Project covers design, development and production phases and according to project schedule first delivery would take place in September 2020 and deliveries would be completed in September 2022. The PHSFS Project was handed over to the SSB on November 28, 2016. According to sources within the scope of the PHSFS Project first firing tests with Ballistic Test Missiles, Controlled Test Missiles and unarmed Seeker Guided Test Missiles took place in 2018 and 2019 at Sinop test range and guided firing tests with armed Seeker Guided Test Missiles (with live warhead) took place during the second half of June 2020. At short video shared by SSB DEMIR on July 1, 2020, also included sections from live firing test that conducted on June 17, 2020 against fixed target lifted some 20m from ground level and simulating static air target. During the test at least two live PORSAV missiles fired against fixed target.

On July 1, 2020 President of Defence Industries Ismail DEMIR announced with a tweet that Turkey’s new Mobile Low Level Short Range Air Defence System ‘SUNGUR’s tests were successfully completed and the brand new weapon is ready to be added to the TAF inventory. According to SSB DEMIR, the SUNGUR is able to engage its target while moving (shoot-on-the-move capability) and able to detect, identify and track its targets both in day and night conditions at 360-degree sector.

The SUNGUR self-propelled surface-to-air missile system which provides mobile, short-range air defence protection for ground units against cruise missiles, unmanned aerial vehicles, low-flying fixed-wing aircraft, and helicopters is armed with PORSAV. According to short video shared by SSB DEMIR at his official twitter account the SUNGUR features a 360-degree rotating gyro-stabilized (allowing the missile pod to maintain aiming direction regardless of vehicle motion) air defence turret mounted atop a BMC’s VURAN 4x4 Armoured Vehicle. The electrically controlled turret has two PORSAV missile launcher pods, each capable of firing 2 fire-and-forget IIR guided missiles in rapid succession and fitted with a Star SAFIRE 380 HLD FLIR System for target detection and track purpose. Contrary to ZIPKIN and ATILGAN PMS Systems in TLFC inventory the SUNGUR is not equipped with a .50-calibre automatic machine gun to cover the missile dead zone and engage ground targets. The SUNGUR is believed to be able communicate with TLFC’s Air Defence Early Warning and Command Control System (HERIKKS/Skywatcher), which permits external radar tracks and messages to be passed to the fire unit to alert and cue the gunner.

According to video SUNGUR is manned by a gunner, who operates inside the vehicle under armour protection. The gunner uses a control and display panel that features a multifunction colour display and two joysticks. Targets are acquired by using the STAR SAFIRE 380 HLD FLIR (forward-looking infrared), which features a laser range finder and a video auto tracker. The FLIR sensor provides SUNGUR with a target acquisition capability in obscured battlefields, at night, and in adverse weather.

The SUNGUR Low Level Air Defence System and PORSAV National MANPADS is expected to enter service with the TAF in late 2020. As pointed out by SSB DEMIR, the SUNGUR/PORSAV will be also integrated with Land, Air and Sea platforms in the inventory of the TAF in near future. 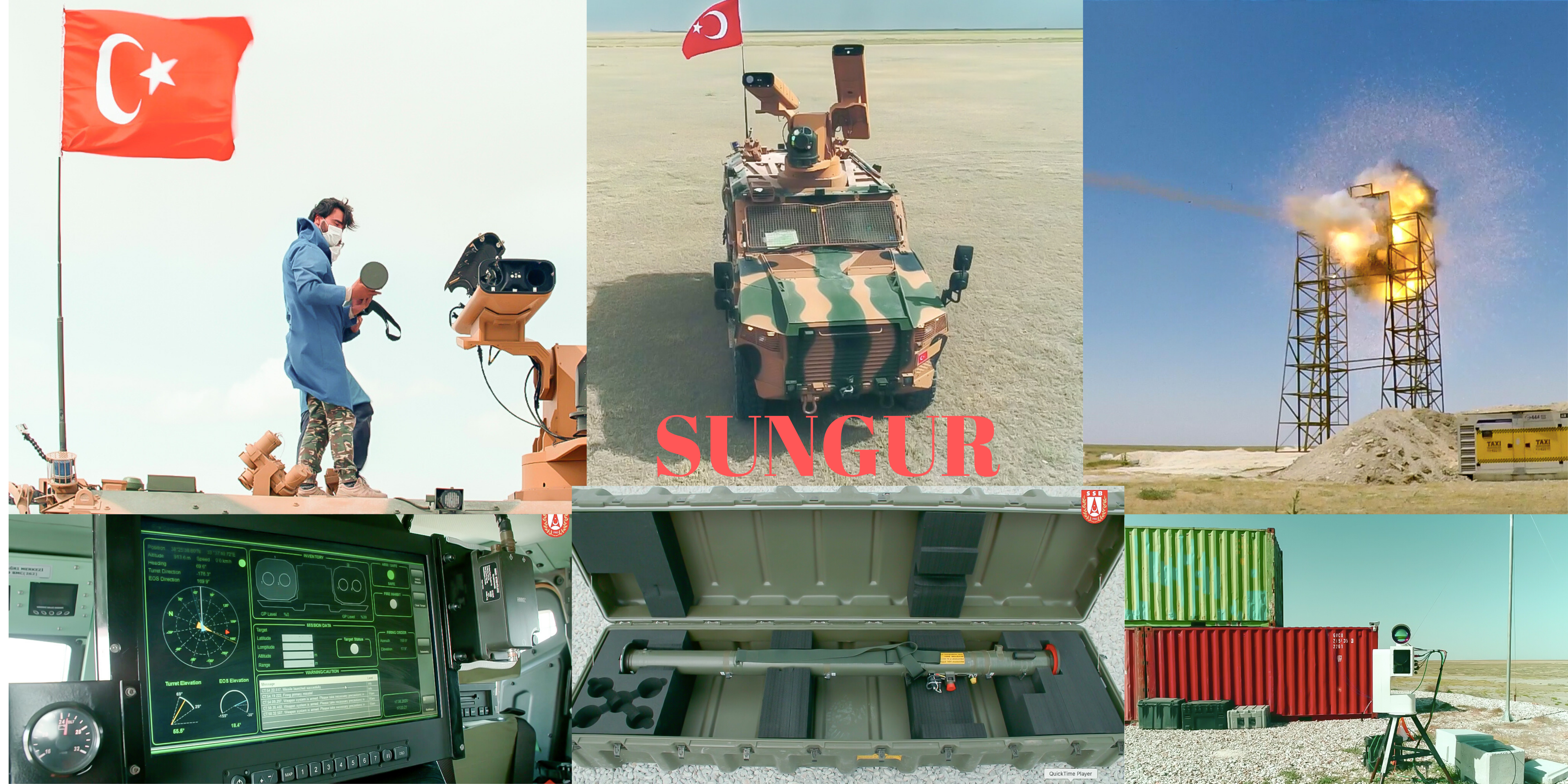 Did you have another example in mind? I can't think of any, but there are lots of candidates so I might be missing one.
G

TomS said:
Did you have another example in mind? I can't think of any, but there are lots of candidates so I might be missing one.
Click to expand...

From ones that come to mind there are Mistral 3 and Type 91 Kai. Possibly other bit more obscure examples but can't remember any at moment.

TomS said:
Did you have another example in mind? I can't think of any, but there are lots of candidates so I might be missing one.
Click to expand...

From ones that come to mind there are Mistral 3 and Type 91 Kai. Possibly other bit more obscure examples but can't remember any at moment.
Click to expand...

Thanks! Those were new to me.
S

Yes, the obscure one is perhaps the Chinese QW-4. It also have Imaging Infra Red seeker. 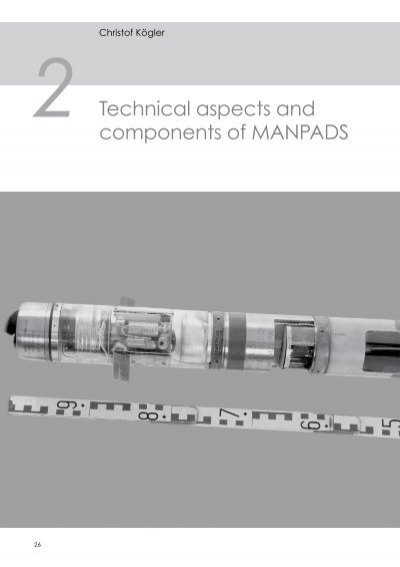 Technical Aspects and Components of MANPADS

That chapter is taken from the following publication :