The Truth About The Wunderwaffe - Igor Witkowski - Comments?

I just came across this title. Does anyone here have familiarity with this book? If so, your comments as to its quality?

The Truth About The Wunderwaffe - Igor Witkowski

This could be the most impressively researched bok on the subject ever written, and *still* all you'd need to know about it is the author is the same [insert denigrating insult HERE] who has spent years promulgating the "Die Glocke" nonsense at every opportunity. In other words... 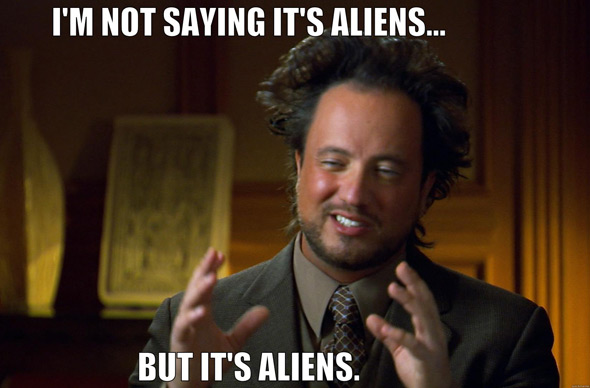 Witkowski frequently writes in Polish military historical magazines on radars, missiles and other advanced yet 'conventional' weapons of Third Reich, and seems to be quite credible in that.
This very book however is a core of his theories/fantasies about German flying saucers, time-machines, space bases in Antarctica etc. etc. Very interesting if you like 'The X-Files' climates .

Ah, that would explain why all those "Die Glocke" books popped up on the Amazon page. Oh well.
M

Thanks for the info.

I recently picked up Squadron's new "Haunebu II" kit and could use good references about the whole "Secret Nazi Flying Saucers" in order to better detail the kit. I know from the outset, for example, that the three spheres underneath the "real" Haunebu flying saucers weren't gun turrets as the Squadron kit depicts them were part of the Vril generator propulsion system. So they wouldn't have guns sticking out of them.

Thus I'm in the market for good reference sources about these things and it seems like Witkowski's book wouldn't be that. At least not at the $40USD price Amazon is listing it at.

On a more serious note, I was hoping that this book might be more along the lines of a debunking of the whole "Wunderwaffe" BS and not more cheerleading promoting it.

I would really appreciate an intelligently done bit of sound engineering analysis of the various "Luft 46" designs as they truly cry out for it. Things along the lines of: "the asymmetric placement of the jet engines on this aircraft proposal would make for extreme controllability problems and most likely be fatal in an engine out situation," and "given the wing sweep and listed weight of the design, the center of gravity would be too far aft for the plane to be sufficiently maneuverable in its intended fighter role" or "the fuel efficiency of the engines specified in the proposal would mean the aircraft would fall far short of its required range and thus could not possibly reach New York from Germany," and so on.

I think such a book would be well received.

Alas, Witkowski's here is not such a book.

But at Amazon, 6 of 8 reviews were positive ! And if you look at "customers who bought this book, were
also interested in these ...", I don't think, that "debunking of the whole "Wunderwaffe" BS" would have made
many $ for the author. I'm pretty sure, that 75% really want to read, that all those "Wunderwaffen" were
real, around the corner back then and either forming the technological future (related to 1945), or (even better !)
are still waiting to be discovered in a secret underground hideout/bunker/ ... hollow earth ?
Somehow I can understand those people. Did you ever read a book, where the end was extremely disappointing,
though the story started exciting ? You probably wouldn't buy another book of that author, would you ?
Books, especially such books are business, an author debunking the myths about "German Wunderwaffen" would
probably lose two-thirds of the customers, he could gain with a more "positive" report.
One more reason to be thankful for the authors, we have here in this forum !

A foole & his money,
be soone at debate:
which after with sorow,
repents him to late.

Jemiba, yes I have read a book just like that. Go read The Return by Bentley Little.

Madoc said:
I know from the outset, for example, that the three spheres underneath the "real" Haunebu flying saucers weren't gun turrets as the Squadron kit depicts them were part of the Vril generator propulsion system.
Click to expand... 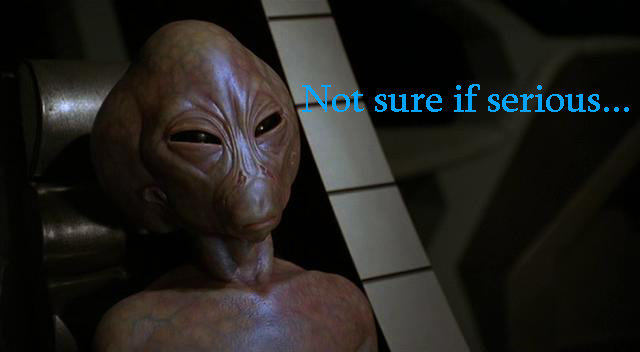 I'm *assuming* you're kidding. But in either event... the "Haunebu" flying saucer is entirely fictional. And not only is it fiction, it's fiction based on further fiction. The shape of the saucer itself is based on George Adamksi's silly flying saucer claims from the 1950's and his hoaxed photos: 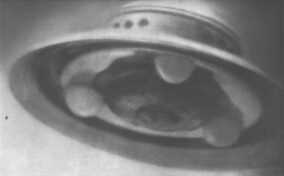 And "Vril?" Vril is a fictional form of magic used by an underground race of supermen in an 1871 sorta-sci-fi adventure novel, "The Coming Race." Idjits later glommed onto vril as "real" in much the same way that people often take what is clearly fictional and come to believe it's real. "Vril" got lumped in with the rest of the late 19th century spiritualist rubbish - theosophy and Atlantis and Lemuria and ectoplasm and all the rest.
M

Over on Starship Modeller Marco Scheloske pointed out that the very name "Haunebu" is just an altered form of the German word "Hanebüchen," which means, roughly translated; "roll-eying nonsense," "absurd," "grotesque."

As I now have the kit however, I'm interested in making the thing as "accurately" as possible. This, just like I'd want to make an Incom T-65 X-Wing fighter as accurately as possible as well.

Madoc said:
... pointed out that the very name "Haunebu" is just an altered form of the German word "Hanebüchen," which means, roughly translated; "roll-eying nonsense," "absurd," "grotesque."
Click to expand...

That meaning could point to a still unknown feeling for irony amongst those in charge for allocating such "secret project names. ;D
But AFAIK, "Haunebu" is a name to be found in old texts, mainly from Egypt and was used as description of people from northern
countries, probably the same, generally called "Vikings" today.

Madoc said:
As I now have the kit however, I'm interested in making the thing as "accurately" as possible. This, just like I'd want to make an Incom T-65 X-Wing fighter as accurately as possible as well.
Click to expand...

In that case, there are some perfectly cromulent detailed and verifiable sources upon which to base your X-wing models: the actual filming miniatures and full-scale mockups that were built. But the Haunebu? It seems that this is the source: 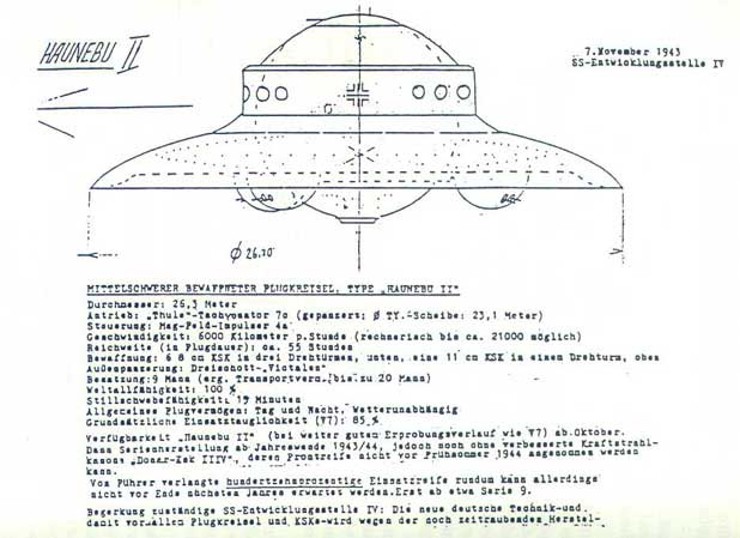 It's not very detailed. Everything that came after this is getting away from the original, and is no less inaccurate than your own model, no matter what you choose to do with it.

Star Trek: the original series had a well-represented depiction of the starship Enterprise. Your could *easily* make a model of that that is "wrong." But it also had a whole lot of minor spaceships that were depicted as nothing more than tiny blobs or glowing lights on a viewscreen. Thse ships, like the Haunebu, are opn to interpretation because not only are they fictional, they're detail-free.

Why doesn't "Iron Sky" qualifies as a trustworthy source in the same way, as "Star Wars" or Star Trek" ?
There isn't a shortage of sources then, you'll even find detailed drawings:

Seems that that legend about Haubenau , nazi ufo and misterious base on Antarctica was born like fictional sci-fi book .

Why doesn't "Iron Sky" qualifies as a trustworthy source in the same way, as "Star Wars" or Star Trek" ?
Click to expand...

It's been a while since I posted on the forum. But I can give you a precis review of Witkowski's book (second, "updated" edition), although it has been much time since I had read it (2013). In my opinion, the first two-thirds of the book are really decently put together, including document pages and photographs/technical drawings et. al. (The technical drawings are not contemporary--as meaning not done in the 1990s onwards; I mean contemporary at the time of their design.) There are however, two pages of computer-generated illustrations of the Ho 229, and the P 1109 and the Lippisch P-13b. New materials (at least to me) encompass electronic component miniaturization (yes, they were well into it), computers, plastics, infrared and radar systems. There is an additional chapter on the German nuclear bomb program, and further elements about it in later sections also. The section that most readers would be curious of, and want to know about is the third section, "Kreigsentschedend" about the much-ballyhooed "The Bell," and even a chapter "They physics of The Bell." The section (Part III) is layed out in a straightforward, workmanlike manner. Documents, photographs of ruins and bunker interiors, personnel who may have been involved (along with further documents referring to said persons in the right time frames), even digressive sections on the Foo Fighters (from US intelligence documents of April 1945), and the results of interviews of what Witkowski says is "the only living person who had had direct access to the German documents and other wartime sources," are a broad brush-stroke overview of main elements that deal with some angles of the The Bell story. The person's name is Professor Miecyshaw Moldawa. I think, based on what Witkowski put in his book, the author does make a case that "something very weird" was going on in Silesia. He also throws in stories about the removal of the highest-level-ranked German government persons in May 1945 to elsewhere. (Not certain why that was done.) I personally think Witkowski dug enough stuff up to say there was a program that was pushing the physics, but whether it was the hokum and bunkam one can read in many places on the Web, I don't think anyone can currently say. But the book is very interesting. But I would not hang my hat on the conclusions.
You must log in or register to reply here.
Share:
Facebook Twitter Reddit Pinterest Tumblr WhatsApp Email Link
Top