The General Staff and the Helicopter

Since 1918 and the formation of the RAF, the British Army has sought its own dedicated close support capability. This finally entered the Army Air Corps (AAC) order of battle in 2004 with the arrival of the WAH-6D Apache Longbow.

The AAC had been arming its helicopters since the service’s establishment in its modern form in 1957, even if that was a Sterling poked out the door of a Skeeter. The arrival of the Scout saw heavier weapons, including guided weapons, mounted on the AAC's machines but it was the Lynx and its TOW anti-tank missiles that gave the British Army the means to halt the Soviet Horde. Meanwhile, across Europe, armies sought an attack helicopter - what the popular press call a ‘gunship’ - as an alternative to the US Apache and Europe's helicopter builders proposed types such as the Fokker/VFW/Westland P.277, Agusta A129, Eurocopter Tiger, Westland WG.44, WG.45 and WG.47 types for consideration.

The General Staff and the Helicopter examines these alternatives to the AH-64 Apache from the British Army’s perspective, drawing on previously unpublished material from HM Government and company archives to describe how the AAC’s doctrine changed from the agile, small and stealthy Agusta A129 and WG.44 of GST.3971 to the large and tough Apache of SR(A).428. This change saw the resulting procurement process become a foregone conclusion but rules of procurement saw the Cobra Venom, LHX, Mangusta, Rooivalk and Tiger up against the General Staff’s favourite; Westland’s WAH-64D Apache.

Lavishly illustrated with many previously unpublished photographs and drawings, including original artwork by Luciano Alviani, The General Staff and the Helicopter tells the story of how the British Army acquired the most formidable close support helicopter on earth as its long sought after organic close support platform.

Hopefully we'll have The General Staff and the Helicopter available in the spring.

Thanks for your ongoing support in our efforts to document areas of aerospace that receive little attention.

Thanks for the tease Chris - look forward to obtaining a copy when it is published.

Oh my God,brilliant,thank you my dear Chris.

Any new news for when it’s coming out? Its been about 6 months since the last news.

I second that enquiry.
Looking forward to it joining its' companions on the bookshelf

It's in purdah. Currently working on Typhoon to Typhoon, so once that's out of the way, I'll get back to it.

Prompted by John21, I have dug out GSATH and doing a spot of editing.

I've seen it all three ways.

Ultra Light or Ultra-Light seems most common on Fairey paperwork and literature, the former on drawings, latter on ad material, the single word Ultralight possibly a modern contraction?

I went with Ultra Light for TAATH. That seems to be the most common form on the Fairey and ministry documents of the time.

I agree with Joe, Ultralight is probably a modern mistake.
I never entirely trust the ministry authors, they seem to have typed whatever they liked on their minutes and memorandums, e.g. T.S.R.2, TSR-2, TSR.2, TSR2, Provost T. Mark 1, T Mk.1, T Mk1, T.1, Mark 1. You could go cross eyed trying to untangle all that!
G

I've never quite been sure of the correct designation for the TSR2. Obviously, no one else is, either!
G

Any update on this book? It still does not appear on Amazon (U.S.).

Evening chaps, Been busy with the day job and working on Typhoon to Typhoon for a Telford launch with Crecy. On the good news front, we have had a great deal of clarification from Leonardo on Westland projects.

Been working on it off and on, Currently at the editor. Being classed as key personnel I don't have full lockdown to get GSATH done.
Stop laughing at the back, Yes, you, Schneiderman.

Chris
I am sure we all want to make sure you stay healthy and happy, so as the watch sarge said in Hill St Blues, be careful out there!
I want a copy as soon as they are available!

Sadly I have to work as normal, from home. Would have appreciated 4 weeks holiday at home on full pay...

Hope you all have a reasonably good Easter! 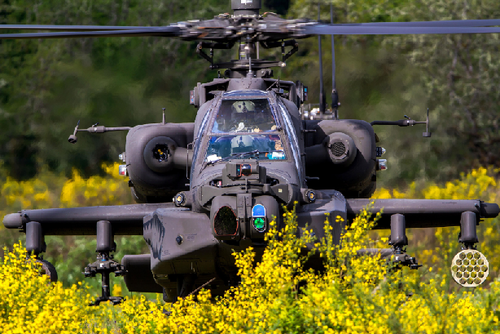 GSATH has gone for layout. Hopefully, once things open up, it will go for print.

More info as I get it.

Will do. I have an early layout version, first run at it and it looks grand. Good news is I can add some extra material and what does extra material mean?

Now, a question for our botanist chums.

Is that Apache lurking in gorse, whin or some other shrubbery?

CJGibson said:
Will do. I have an early layout version, first run at it and it looks grand. Good news is I can add some extra material and what does extra material mean?

Now, a question for our botanist chums.

Is that Apache lurking in gorse, whin or some other shrubbery?

Great news Chris. I'm looking forward to getting this one.

CJGibson said:
Is that Apache lurking in gorse, whin or some other shrubbery? 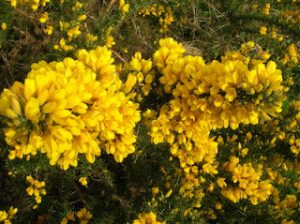 A few years ago, an acquaintance emailed me in extreme frustration because he’d looked up furze, a word he encountered while reading a mystery set in Scotland, in a dictionary. The definition for furze was …

also, note the surname of the above piece's author . . .

Gorse, Furze, and Whin? That's all Greek to me, or is that Gaelic?

The General Staff and the Helicopter has gone to the printers and I am currently looking at a proof.

This has been a bit longer in production than its predecessors, mainly because I've been sourcing lots of new material and working very closely with retired Westland engineers to get the story straight. I think it's been worth the wait as The General Staff and the Helicopter now contains a great deal of new information on Westland's work and the British Army's attitude to Westland, the Eurocopter Tiger, the Agusta 129 and the Apache.

The General Staff and the Helicopter covers the early years of the Army Air Corps, opposition from the Air Staff, the search for a reconnaissance helicopter with the HR.144 specification, the Scout and Gazelle but the bulk of the work examines the Westland Lynx in the helarm role, the anti-tank weapons and the quest for an attack helicopter for the Army Air Corps. The road to the Apache AH1 was not as straight and narrow as might be imagined since the General Staff was more interested in the Mangusta than the Apache while Westland's efforts drew on Lynx experience coupled with the application of low observable technologies to completely new designs such as the WG.37, WG.44, WG.45 and WG.47.

By the early 1990s there was only one attack helicopter for the Army Air Corps - the Apache. As ever, British weapon system procurement was convoluted, with politics becoming a factor, especially after the end of the apartheid regime in South Africa.

I've also included what is possibly my favourite quote of all time.*

The General Staff and the Helicopter will be available from 22nd September 2020, priced at £11.95 plus P+P


Here are a few sample pages, including the Contents and Index pages. 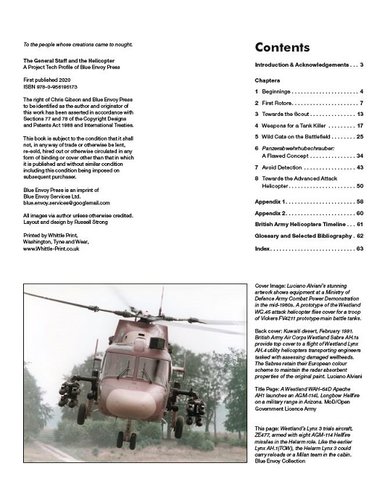 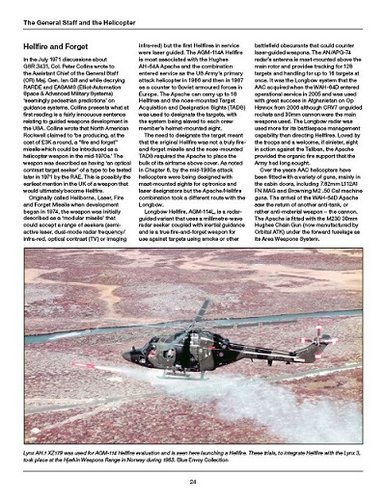 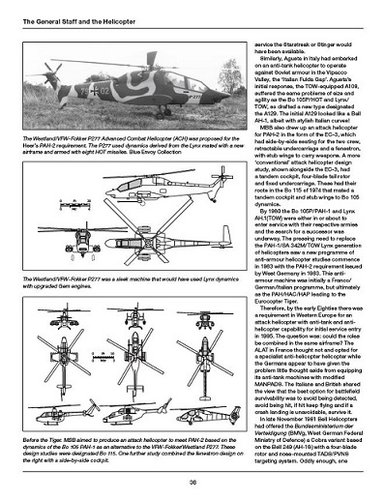 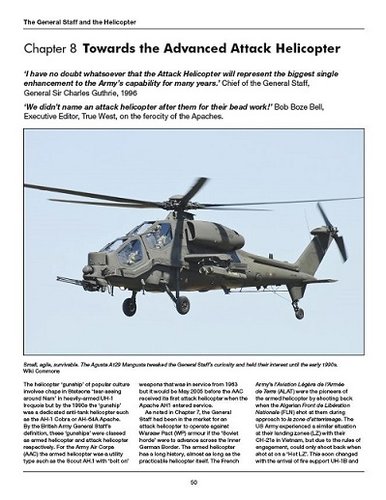 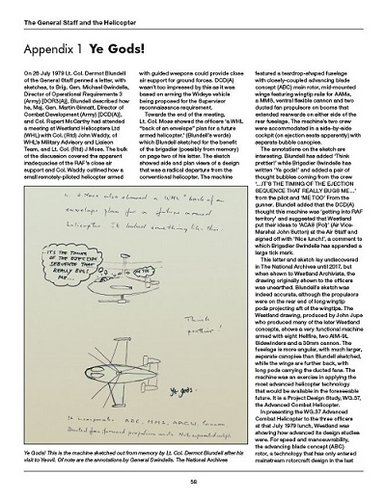 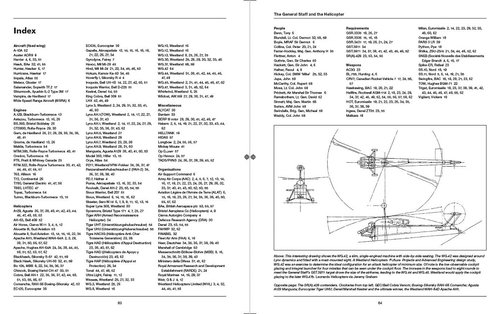 I was just about able to read the 'Ye Gods' page. Excellent.

I better shrink it a bit more...

Excellent work Chris- this will fill a much needed gap. It's fabulous that you guys have put so much work into these ong overlooked topics. Thank you!
5

Does the OH-6A feature at all in the section on Scout helicopters? Thanks.

Where's going to be best to buy from mate?

500 Fan said:
Does the OH-6A feature at all in the section on Scout helicopters? Thanks.

GTX said:
Where's going to be best to buy from mate?
Click to expand...

If you want it quick, me.

GTX said:
Where's going to be best to buy from mate?
Click to expand...

If you want it quick, me.

I ask this every time one of these books comes out -

How to pay - presumably PayPal ???

Paypal, no problem
blue.envoy.services@googlemail.com
Dunno, depends on the weight of the high quality paper I've chosen.

I'll be posting the relevant info when I have the Alfa full of boxes.