Today I would like to start a topic on something that has never been dealt with anywhere before, at least to the best of my knowledge. In the first half of the 1930s, the U.S.A.A.C. evaluated a number of civilian projects for possible purchase. Instead of using the "P-" list from number 600 up, the Air Corps used a whole different and original system of temporary designations which incorporated the planned mission of each aircraft: (A) for attack, (B ) for bomber, (BT) for basic trainer, (C) for transport, (O) for observation, (P) for pursuit, and (PT) for primary trainer. The list started at number 900 and is known to have extended up to number 950. All type numbers were preceded with an "X", indicating their strict experimental status.

Now these designations were no longer simple airframe numbers as in the old system; here each designation corresponded to a different type (with sub-types in a few cases). Very often the manufacturers themselves would use the designations in their records, while the Air Corps would drop them and replace them with appropriate numbers in each of their respective series if purchased.

This designation system and the list of airplanes that are concerned have all but fallen into oblivion, largely because aviation historians and enthusiasts didn't know what to make of them, assuming wrongly that they were in-house designators from the manufacturers.

I would like to share my list with you, bearing in mind that seven numbers are still missing. Also quite a few of the others are devoid of any details and have only made it to the list thanks to the index of the Sarah Clark archives, which contain documents about them (how I wish I could browse through these!)

For years I've searched high and low to get more info and fill in the blanks, but this is the best I've come to so far. Has anyone found a strange X_-900 designator somewhere that they didn't know what to do with? Here's your chance!
J

Re: The forgotten X_-900 series... and BuAer design numbers

With respect to the Wright Field Project numbers, I presume that you have seen my list at http://www.aerofiles.com/wright-field.html. Probably the best there is (but then I am biased )) With the passing away of KO Eckland earlier this year, I have no idea how long this website (and list) will remain available.

Finally, are you aware of the Bureau of Aeronautics design numbers.
The US Navy’s Bureau of Aeronautics was established on 10 August 1921. Its duties were defined as comprising "all that relates to designing, building, fitting out, and repairing Naval and Marine Corps aircraft".
As such the Bureau issued specifications for a number of aircraft which were built by contractors. In the late 1920s and early 1930 a number of these specifications were identified as BuAer designs. Numbers known to me are listed, along with the designations of the contractors’ aircraft.

Hi Jos, and thanks.

Of course I know your wonderful Aerofiles website. You may recall I once sent you a mail for help with the Bell designations... my name still appears on the page I think... Though it's not devoid of mistakes here and there, your site represents one of the best sources available anywhere and I've often refered to it for help! It would be sad to hear no-one can make it live on... If you need some help of any kind, please let me know.

XP-939 and XC-944 seem correct to me too. I never really believed they could be other than a pursuit and a transport type, but my initial source had them written this way...

As for the BuAer numbers, I had exactly the same list, once copied from this forum, hence from your site... We'll have to keep searching! Thanks again.
S

Just found another element to add to the list of mysteries here: the Northrop XP-938... Appears on the web in a photo archive from the war era that seems pretty accurate:

This aircraft, of course, is known elsewhere as the Vought XP-948...

Thanks Stargazer and Jos Heyman

also the Fairchild T-943 was twin engined amphibain aircraft,I think
it was onlu a project.
S

also the Fairchild T-943 was twin engined amphibain aircraft,I think
it was onlu a project.
Click to expand...

Okay, thanks for the details! But as I said earlier on, the Fairchild designations A-941/942 and T-943 are inhouse designations and not actually part of this USAAC list. "A" was for Attack, not Amphibian, and the 941 to 943 slots are already clearly identified.

A single CO-1 was tested at US Army’s McCook Field with serial P-377, whilst a CO-2, fitted with a Liberty 400 engine, was tested with serial P-379.
Based on the German Heinkel HD17, the aircraft, which have also been referred to as the Cox Heinkel, must not be confused with the Engineering Division’s CO-1 and CO-2 design, ie the Cox Klemin CO's are not military serials.
Both aircaft were returned to Cox Klemin after testing was completed.
S

Jos Heyman said:
A single CO-1 was tested at US Army’s McCook Field with serial P-377, whilst a CO-2, fitted with a Liberty 400 engine, was tested with serial P-379.
Based on the German Heinkel HD17, the aircraft, which have also been referred to as the Cox Heinkel, must not be confused with the Engineering Division’s CO-1 and CO-2 design, ie the Cox Klemin CO's are not military serials.
Both aircaft were returned to Cox Klemin after testing was completed.
Click to expand...

Sorry guys, but you are NOT refering to the special X_-9xx series! This is the P-xxx series which is pretty well documented already... If you don't find a post around here on the subject, I'll get one started so you can contribute there.
S

Ever wondered what the U.S. Army Air Corps's Wright Field base looked like?

The Great Lakes Model 41 started life as the Inland Model T.
It was evaluated as the XPT-930, which variously appears under both identities.

This makes the XPT-913 the Spartan C2-60, details of which can be found in Aerofiles.
As far as the Great Lakes XPT-931 is concerned, I have this one also listed as XO-931. A bit confusing.....
As far as the Seversky XP-944 is concerned, I believe we need more evidence that is solidly reliable. Unless such evidence is available we might end up with another designation that has been invented at a later date.
For the time being I stick with the Sikorsky XC-944 Amphibian. If the latter would have been designated as XP-944, we could have interpreted Sikorsky as a 'typo' for 'Seversky', but the P/C difference does not justify that interpretation.
S

Thanks, Jos. At least there is one source I have found to justify the XP-944 designation, and it's the Polish Monografie Lotnicze #25 on the P-47 Thunderbolt.

As for the duplicated numbers, there seems to be a pattern of this (likely du to some typos along the way for some of them):
The Fairchild designations are especially confusing. Why use the "A" for "amphibian" since that letter was clearly used for attacks (which the Model 91 assuredly was not)? Why the use of the "T-" prefix on the second amphibian proposal, which doesn't appear on any other evaluation in the series, and why no "X" attached to it?

Now if the "A- for amphibian" was genuine (which remains to be seen), I guess this would simplify in part the "944" question. Indeed, the book Long Island Aircraft Manufacturers (Arcadia Publishing, 2010) has the following caption for a SEV-3 picture: « The aircraft set numerous speed and distance records for amphibians in 1934 and 1935, which attracted the interest of the U.S. Army Air Corps. » So the quoted "XA-944" may have been genuine and therefore "XP-944" a typo (after all, the SEV-3 doesn't look anywhere near a pursuit!). Questions, questions...
S

More on the U.S. Army Air Corps evaluation of the SEV-3:

Contrary to what's said above about it's evaluation as an amphibian, here is a photo of the SEV-3 on wheels with spats with the following caption: « The record breaking SEV-3 amphibian as it appeared at Wright Field in the summer of 1934. »

It would seem therefore that along the way, the SEV-3 was changed to standard configuration for Army testing — which is logical since the SEV-3 is said to have served as a basis for BT-8 procurement. 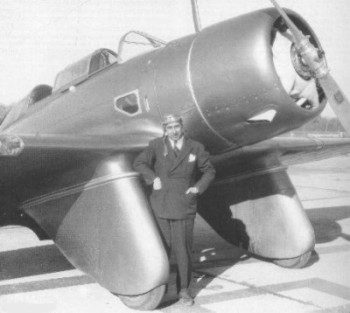 Jos Heyman said:
This makes the XPT-913 the Spartan C2-60, details of which can be found in Aerofiles.
Click to expand...

I'll have to disagree on that. If you compare the two aircraft, you'll notice significant differences, notably the tail's shape, overall size and absence of wiring between the main wheels. This is definitely NOT a C2.
S

I seem to be doing all the posting on this page, but anyway... another scan, this time from Republic P-47 Thunderbolt (MBI). And although it doesn't state a Wright Field designation, it definitely says that "in Dayton, the SEV-3L participated in a training aircraft contest" and "displayed a performance superior to the existing fighters."

This makes the "XP-" prefix for the "944" very unlikely, therefore. "XBT-" would be logical; "XA-" for the original amphibian configuration, maybe. But not "XP-"...

Coming to think of it, there are quite a few mysteries left in the other designations too... A few updates from my research:Possible candidates for the unidentified slots:

Jos Heyman said:
This makes the XPT-913 the Spartan C2-60, details of which can be found in Aerofiles.
Click to expand...

I'll have to disagree on that. If you compare the two aircraft, you'll notice significant differences, notably the tail's shape, overall size and absence of wiring between the main wheels. This is definitely NOT a C2.
Click to expand...


Jos, we were both right AND wrong about this one! The XPT-913 was the sole Model C2-165, a navigational trainer prototype that owed more structurally speaking to the C3 biplane than the C2 (Spartan designations are definitely confusing). See topic here:
http://www.secretprojects.co.uk/forum/index.php/topic,16699.0.html
J

The Seversky SEV-3 was an amphibian, the wheels retracted into the floats.
A for Amphibian would fit if the SEV-3 was the XA-944.

Digging out this old thread

Yeah, the Aircraft Year Books are great. I have downloaded them all and keep discovering stuff in them!
Here's another photo of the Great Lakes XPT-930, by the way, along with a three-view arrangement:

The Seversky SEV-3L (X2106) in its amphibian form can be found in this old Kendall advert from Aviation magazine (December 1933). The ad also gives some specification data.