The Chinese build weird stuff in the desert....

Anybody got a good guess what this is???

According to today's Danish news (If you read Danish: http://nyhederne.tv2.dk/article.php/id-45661683:megamønstre-i-kinesisk-ørken-undrer.html), at least one of the structures is supposedly the world's largest fertilizer manufacturing plant (near a place called Lop Nur).

Also, according to the British newspaper Guardian (via the same link as above), China has previously built "replicas" of potential future areas of military operations, for training purposes, also around Lop Nur.

Just for information, as I am not sure how credible this information is.

Here are even more:
http://gizmodo.com/5859081/why-is-china-building-these-gigantic-structures-in-the-middle-of-the-desert

I'm just curious what this one is. 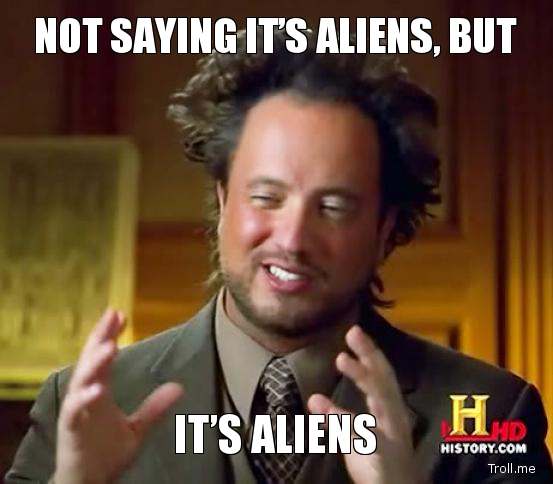 Where are their FEL sites? Supposedly they have two.

I have to admit that my first thought was to make a rude comment about the Chinese not getting modern art, but as I looked at it I got this idea that it could be some kind of test pattern for a space based imaging system. Or more a pattern for testing an interpretative (possibly A.I. based) system.

Is creating a test on this scale a bit extreme? Well, we are talking about military and government level decisions. What's extreme?

Whats the back story on that Aliens guy? He does not look very credible...

Abraham Gubler said:
Whats the back story on that Aliens guy? He does not look very credible...
Click to expand...

the guy is on the "Hysteria" Channel (aka Hitler channel Also called History Channel )
Giorgio A. Tsoukalos is part of the top-overexert TV show “Ancient Aliens”
wat ever counter-argument you say, he say “it’s Alien origin”...
in other word the man is a amusing cult figure ;D

And that is being generous!

While we're all hypothesizing about these Chinese 'whotsits' in the desert, here's my theory - they're for no purpose other than to make the strategic recon assets of other powers stare at them... whilst they're up to something else (probably with aliens and / or amusing cult figures ).

Anyone here have any interest in magic / conjuring? Distraction is one of the key techniques...
S

Something to do with the Davos congress, maybe?? The similarity is interesting. ;D

Abraham Gubler said:
Whats the back story on that Aliens guy? He does not look very credible...
Click to expand...

I think the guy's a wannabe alien himself, it appears he stole his haircut from Londo Mollari of Babylon 5 fame.

xmotex said:
......it appears he stole his haircut from Londo Mollari of Babylon 5 fame.
Click to expand...

Ahem! Back to topic (promise).

"She was half woman, half fish. Terrible in the kitchen, but a bloody good swimmer."

A grid to test some overhead ordinance's ability to target a specific part of an arbitrary city street plan?

I've just had a look around the area of this site to see if there is any indication of what it could be and a few things popped up. First of all it isn't that big. About 1-2km (1 mile) square and each line is about 20-30m wide (60-100 feet). The lines are disrupted by terrain features where significant enough and would appear to be quite minor engineering. Next to the grid is a big square arout half a mile square that is entirely coloured in (so to speak) with the turned earth. There are a few car/truck tracks around both objects. Just north of the filled in square is a collection of what could be bunkers or huts. Four in a line and another two spread a bit further north. Each about 5x10m. A graded road goes north a few klicks to where it meets up with a metalled road on an east-west axis. 5km east is those two airfield looking objects, one of which is quite shiny. Also there is a bit of a base there, though it does kind of look deserted.
Edit: Jonathon Hill, a research technician and mission planner at the Mars Space Flight Facility at Arizona State University, has told media the patterns are almost certainly grids for spy sat camera alignment.

Spiegel.de strikes back after 48 hours after picture pop-up in Internet
and show them to Expert 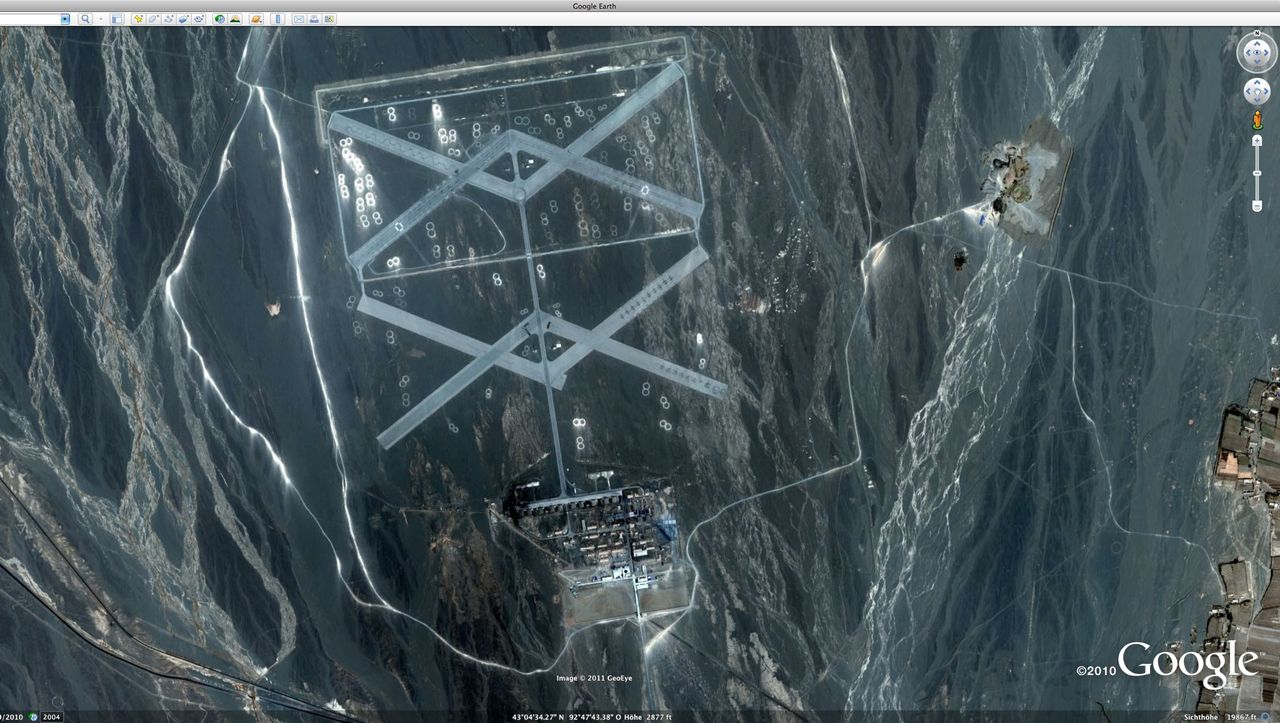 The Blue [/FONT]Airstrip is a new one paint in blue, so easy to see for pilots
while next to it, the old one Airstrip decays


for mysteries grid have two explication
one: this is a power grid of a wind park
two: this ol or gas prospector traces (you will find similar trace in Tunisian)

the "HARP installation" is a short wave radio-transmitter

the so called Alien-pool aka the big blue pools
is simply the plant Lop Nor, they mining Potash salts with help of gigantic water reservoir and the Sun

On a tangent, with regards as to China and Google Maps:

The US Digital Map pf the World, issued by the US Government is up to 20 kilometers out in it's locations. The Russian cartography is often out by up to 100km for cities in Russia and associated countries. So, the Chinese aren't that badly off...