Knowing how popular helicopters are here I thought I would try this one out.
In the 1970s the US cancelled the futuristic but troubled Lockheed AH56 Cheyenne in favour of a new competition which Hughes won with the Apache leaving modified Huey Cobra variants designed for Vietnam to serve well after the Cold War finished.
In the same timescale France and Germany started with observation helicopters armed with anti tank missiles before embarking on various designs which finally entered service long after the Cold War ended as the Eurocopter Tiger. Likewise
the Brits started with similar helos and did not get its own Apaches until this Century.
The Soviets meanwhile introduced the Mil24 to all its allies.
In hindsight couldnt the West have done a better job, but with which type?

The Cheyenne wasn't anymore "troubled" than any other new program. The Cheyenne would be my first choice (though that pivoting seat could proibably go). S-67 Blackhawk my second. 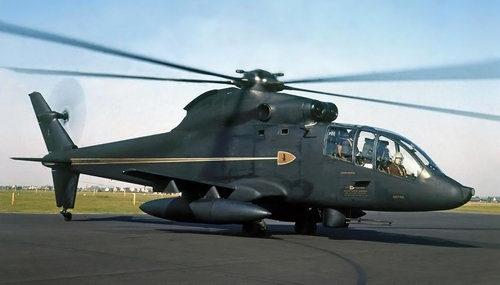 Dont forget the Sikorsky S-66 design,with its very ingenious 90 degree swiveling tail rotor system which allowed it to act as either a pusher prop in straight line flight,or as a regular tail rotor in the hover or low speed flight.

Heres a display model showing the Rotoprop in both tail rotor......

Its rather an elegant setup especially compared to the separate tail rotor and pusher prop configuration on the Cheyenne,tho I personally think that the Cheyenne was definitely the better looking out of all of them.

Heres the S-61A which was the demonstrator for the rotoprop system.Interestingly this was not a new idea,it was first seen on the Gazda Model 100 Helicospeeder which dated back to 1946!
R

Since Sikorsky's S-67 was based on proven S-61 Sea King dynamic components, it would have been quick to reach production.

A Westland and Agusta licence build of S67s?

The VFW Fokker/Westland Helicopters P 227 (also known as the P.227) might have been have been able to be brought into service far sooner (and better?) than what eventually became the Eurocopter (now Airbus) Tiger.

Grey Havoc
I had forgotten about this project.
It would have made the row over the Westland company even more bitter. The UK would probably have still gone for the US candidate.

uk 75 said:
The UK would probably have still gone for the US candidate.
Click to expand...