The amazing career of the Nicholas-Beazley "Phantom I" Pobjoy racer...

Here is a forgotten little airplane with quite an interesting career.

The Phantom I [R1W] miniature racing plane (also refered to as the "Pobjoy Raceplane") is commonly listed as a product of Nicholas-Beazley, a company based in Marshall, Missouri. The truth, however, is a little more complicated than that. The Nicholas-Beazley Airplane Company had imported a British Pobjoy engine with a gear reduction unit for use in its new design, the NB-3.

Designer Robert T. Jones (who would later became famous as the co-inventor of swept wings for transonic flight) computed the weight and balance for the setup and proposed a new design as an air-racer. Claude Flagg and H. G. Landis1 built the aircraft in their spare time under the Marshall Aircraft Laboratories monicker and patented the wing design. The Nicholas-Beazley company, however, conducted the tests and produced the subsequent engineering report on the machine, under the supervision of inhouse chief engineer T. A. Kirkup, who also designed most N.-B. aircraft2.

The total weight of the monoplane was 355 pounds. It featured a patented wing of unusual construction3, with a spread of 21' 9"; its fuselage was 12' 9" in length. Of all metal construction, the Phantom I was powered with a 65 hp Pobjoy P (Niagara II) motor and was slated as capable of making more than 200 miles an hour. The Phantom I was given an "R" license by the federal government and, piloted by Danny A. Fowlie of Morris, Illinois, was entered in the 1930 National Air Races in Chicago from August 23 to September 1. Picture below shows pilot Fowlie at Commercial Airport, Springfield, Illinois. 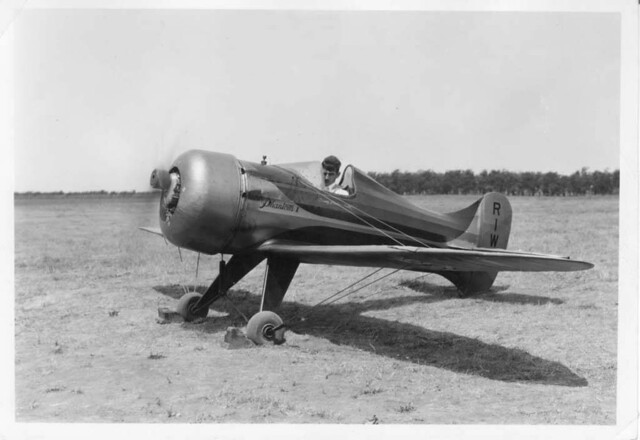 In 1932, after famed racing ace Steve Wittman purchased the aircraft (the only one of his racers he didn't build), the cockpit became enclosed and the Pobjoy P engine was replaced with a Pobjoy R of 75 hp. The aircraft (now called the Pobjoy Special) set many records in 1933-34. Picture below shows N6119G / R1W/7 (cn T-9) a replica of the Pobjoy Special on display at the EAA Pioneer Airport.

But that was not the end of the diminutive racer as it eventually resurfaced in 1948 as the Reaver Special midget racer, with a 22' wing and the more powerful 85 hp Continental engine!


1 Wrongly called "H. F. Landis" by Wikipedia.
2 Contrary to what Aerofiles states, the Phantom I was NOT designed by Kirkup (see the second link below for the whole story).
3 Robert T. Jones's report on the aircraft's wing analysis, dated January 1930, is no longer available online. I'm attaching it below for reference.

Stargazer2006 said:
Here is a forgotten little airplane with quite an interesting career.

The Phantom I [R1W] miniature racing plane (also refered to as the "Pobjoy Raceplane") is commonly listed as a product of Nicholas-Beazley, a company based in Marshall, Missouri. The truth, however, is a little more complicated than that. The Nicholas-Beazley Airplane Company had imported a British Pobjoy engine with a gear reduction unit for use in its new design, the NB-3.

Than Plane seems similar to the cessna racers

maccountrypilot said:
Than Plane seems similar to the cessna racers
Click to expand...

I'll have to disagree with you on this. The Pobjoy racers were low-wing, the Cessnas were high or mid-wing... the tail's shape was different... the landing gear was different... the windscreen's shape was too... To me they were just monoplane racers in the same class, like many others in their days. It's the big cowling of the radial engine of the first version that gave you this impression.
S

The whole story of the Pobjoy racer from Vintage Airplane Vol. 8, Nos. 4 and 5:

Engineer Tom Kirkup was impressed with the Pobjoy [engine]'s potential and offered to promote it by building a racer for the powerplant, thus demonstrating its superiority. Mr. Nicholas approved the idea with one stipulation, no modification to the prototype engine.

Tom made drawings while Ernie Landis and [Claude C.] Flagg fabricated and assembled the racer. When this diminutive craft was completed, it sported a 21' 9" wing span, was 12' 9" long, and weighed 355 Ibs. It was painted black and gold with the name " PHANTOM I" emblazed on its flanks.

Friend Danny Fowlie was brought in to test and race her at the upcoming 1930 National Air Races in Chicago. With the engine modification res triction imposed by Mr. Nicholas, plus an acutely sensitive control system, the best Danny could get was a third place finish in the 275 cu. in. event. If the ship were to be a winner, some alteration was required. No matter who owned or flew this ship it was always referred to as the " Nicholas-Beazley Pobjoy".


Steve Wittman was its next owner and he brought the racer to full bloom. A 23 inch center section was added to the fuselage, necessitated in part by Steve's greater height. Further testing showed a need for greater lateral stability so a fairing was added between the turtledeck and fin. This solved the instability and the porpoising that had plagued it earlier. The ship was completed by painting it in the traditional dark red used by Mr. Wittman. Incidentally, this is the only racer Steve flew regularly that he did not design and build himself.

He then entered her in the American Legion Races competing in the 200 cubic inch event, and ran away from the field, at just over 120 mph.

The next stop was New Orleans and the Pan-Pacific Races in which Steve broke the record for planes of I ess than 441 Ibs., setting a 137.57 mph mark that stood for many years. The next competition was the National Air Races for 1934, being held in Cleveland. The results were the same, with Steve leading the class home at 129.44 mph.

Mr. Wittman was, at this time, working to finish his mighty D-12 powered " Bonzo" (now in the EAA Museum at Franklin, Wisconsin) and three temperamental racing planes was one too many, even for the talented Steve Wittman. Percy Chaffee became its new owner, and he dominated the class at the 1935 Nationals, again held in Cleveland. Apparently this dominance killed the class as the 200 C.I.D. was dropped from the schedule.

Frank Allen was the next owner with Henry Douglas doing the flying at the 1936 Nationals, in Los Angeles.

Flagg recalled seeing the ship unattended at this meet. We can only draw the conclusion that the owner was disenchanted with the 375 cu bic inch class, or possibly that engi ne trouble developed, as there was no evidence of its participation. Its whereabouts for the next twelve years are unknown.

The advent of midget racing sponsored by Goodyear Tire & Rubber Company in 1948 finds the ex-"Phantom I" painted cream and green, now owned by J. P. Reaver of Pallama City, Florida and named the "Reaver Special". Changes included the mandatory 190 cubic inch Continental, with cowl to match, and a 22 foot wing of odd plan form. Mr. Reaver captured fourth place in the consolation event. Supposedly the wing failed at some later date, but this is unverified. Certainly this plane should earn a place in the Hall of Fame, based on longevity alone.
Click to expand...