In January 1973, the Taiwanese company AIDC (or Aero Industry Development Center) started to develop its second aircraft, the XC-2 civil transport. It was a high-wing twin-turboprop monoplane designed to address both military and civil purposes, equipped with a rapidly reconfigurable cargo compartment and able to operate from short unprepared airstrips. A "quick change" passenger/freight variant also planned.

In its civilian guise, the XC-2 (which must not be confused with the much later Kawasaki Heavy Industries transport from Japan) could carry 38 passengers, while in freight configuration, its maximum useful payload was 3,855 kg. The fuselage was of semi-monocoque construction with a rear opening for loading. The vertical fin had a slight sweep while the horizontal stabilizer, position halfway across the fin, was unswept. The main undercarriage was carried in sponsons on either side of the boxy fuselage, maximising internal space. The cockpit could accomodate two pilots and a flight engineer. The civilian version was to have a toilet, a kitchen and a baggage compartment.

The protoype aircraft was first flown on February 26, 1979 in Formosa, Taiwan (Nationalist Republic of China), although some sources claim the it flew as early as 1978. After a limited flight test program, the XC-2 was canceled due to lack of interest from potential customers. 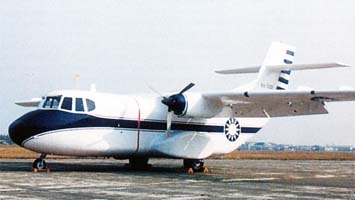 Brief comment in Flight, March 1997, that AIDC regretted not continuing with the C-2:

I don't think it would have had much of a chance against those two types, it was aerodynamically rather less sophisticated and was unpressurised. But it might have taken some sales from the C.212 for operators looking up the scale for a four-tonne payload whilst retaining a rear-ramp.

However the T53 engines were a bit of a liability, they were never particularly popular in the civilian world. They were a reasonable choice for a prototype given that they were available from local production but would probably have needed substitution by the CT7 or PW120 for a production model.

And they'd need to have eliminated the flight engineer position, too...