here is the original Type-525 drawing with V-tail and swept wing,also the Type-576,
a supersonic project version of Scimitar.

I found an neat advert for the Supermarine 525 on the back of a 1955 Battle of Britain Commemorative brochure.

The Type 525 was evolved from the Supermarine 508 carrier-borne reconnaissance-interceptor.

Three Type 508's were originally ordered but ended up as three distinct types.

Type 525 - Allocated serial VX138 and was similar to the Scimitar. First flight by Mike Lithgow was on 27 April 1954. The type used a flap blowing system over the swept wing to reduce carrier landing speed.

The aircraft was sent to the A&AEE for trials and was tested for low speed handling on 5 July 1955. Whilst at 10,000 ft, and unable to recover from a flat spin the aircraft spun in from 3,000 ft two miles from Boscombe Down. It was destroyed by fire and the pilot, Lieutenant Commander T.A. Rickell, died of injuries sustained despite ejecting.

Later the 508 series were developed by Supermarine to specification N113D and became the Type 544 which entered service as the Scimitar.

The last ‘true’ Supermarine project, that is to say one derived from original Supermarine design work carried out at Hursley Park, was the Type 576 from 1958-1959. This was to be the final development of the Scimitar navy fighter, itself the result of work on two-engine fighters that had commenced with the Type 505 in 1946. There were at least five alternative versions of the Type 576 including this, the fourth, which was to be fitted with rocket boosters, probably DH Spectres, mounted on the wing tips.

Spectres in the wingtips! While such a layout would remove the acoustic fatigue problems and space problems a fuselage-mounted layout brings, the risk of a booster failing during the climb to altitude would override those advantages, though I guess in a stable climb there might be more time to safely shut down the other side and enough height to make a successful recovery.
The 576 certainly had fine lines though, some of that aesthetic magic from the Spitfire had reasserted itself in the later Scimitar projects.

Yes, it does appear to be a case of 'you cannot be serious'. The third version of the Type 576 had the rockets mounted beneath the rear fuselage below the jet exhausts and would indeed have been prone to acoustic issues, but this is not a particularly realistic alternative.

A passing resemblance to the phantom, mostly from above.

Could we be looking at an element for a new volume by any chance ?

No, I'm a pre-war guy However if anyone plans to write something I'm happy to help out
F

What was wrong with the Scimitar? Why was its attrition so high (51%!)? Was it just too big for the relatively short RN flight decks, or was there something more fundamentally wrong with the aircraft? Supermarine didn't seem to have any luck with its post-war jets.
J

Stress from the effect of acoustic waves set up by engine noise on the rear structure.

You are correct, it was largely landing accidents. Even with the blown flaps it was a big aircraft for the carriers.
Acoustic fatigue was indeed a problem but as far as I know did not result in any losses.
Supermarine had high hopes for the aircraft and had plans for several derivatives for both naval and land-based use, some supersonic. All remained on the drawing board
Z

There was also subcomponent issues as with fuel pump solenoids, hydraulics, etc.

Plus the fact it was an evolution of a machine intended for for the undercarriageless flexible (rubber) deck system.

It also lacked true area ruling, hence why it was stubbornly subsonic.

True, many contributary problems.
Supermarine made the fundamental mistake of continuing their wartime process of continual modification and adaptation of their designs (very effective for rapid introduction of upgraded Spitfires) rather than starting with a clean sheet which resulted in many aspects of the Scimitar being of mid/late 1940s origin. It did not help that the RN were also stuck with aging systems and ideas on their carriers, far from ideal for such a large aircraft.
Z

One should also remember that when the Lightning entered service the RAF thought it needed only the same maintenance hours as a Hunter. If the RN had approached the Scimitar with that sort of attitude then it would have contributed to the failures associated with this aircraft.
Similarly with training for launch and recovery.

British Pathé newsreel footage (albeit without sound or narration) of the Supermarine 525 at Boscombe Down.
YouTube - British Pathe: "First Flight Of The Supermarines 525 (1954)"

OK, we're moving away from Scimitar projects here, these recent posts are all prototypes on the road to the Scimitar. There were quite a number of Scimitar development projects (nuclear bombers, supersonic versions etc.), one of which is here.
https://www.secretprojects.co.uk/forum/index.php/topic,28921.msg305113.html#msg305113

Schneiderman, interesting graph, I assume its divided by years, what's the start year?

Sorry, yes I clipped the years. It runs from 1944 to 1958.
I generally draw-up something similar for each of my areas of research to ensure I have the timeline correct and to place projects in context with other company activities, competitor work, politics etc. Its surprising how many books and articles get that simple part wrong, too much cart before the horse.

So to get away from an entirely negative view, we should also consider it's merits and potential.

Cockpit visibility is not bad, it manoeuvred well and accelerated quickly until near transonic speeds.
Being stressed for supersonic flight, it proved quite tough at lower altitudes.
It armament of four 30mm ADEN cannon was potent and received wiring for early sidewinders and bulpup missiles.

Sadly the swept wing prototypes were intended to have reheated Avons. But this wasn't forthcoming in time to be be fitted.
While there are concerns over acoustic fatigue with reheat on the rear structure, this is overcome able, if perhaps by greater weight of structure.

It is really a massive missed opportunity.

The RAFs behaviour towards the Scimitar is also of interest.
As a land based aircraft it was expected to be able to handle over 10, 000lbs of stores.
It's clearence for Red Beard meant it was the easiest rout to a tactical strike platform.

The RAF wanted the Buccaneer canceled in favour of a supposedly cheaper development of this aircraft.
A

100 Scimitars were ordered 12/52. By then Red Beard, Firestreak, reheated Avon 200 were in R&D: UK was trying to digest the Weapon System concept. RN was funded/crewed for Ark, Eagle, Victorious (CV), Centaur, Hermes (CV/L).

What everybody forgets is that much of this Korean-inspired spend was $-funded. That stopped for UK 1/7/54. So lots of projects would be for the chop. The Defence budget lost its political support at Suez, 11/56, where so much simply failed. New PM Macmillan's settled position was: “It is defence (spend) that has broken our backs. We also know that we get no defence from (it…We need) wholesale cancellation of defence orders (If) we do all this, we may escape our greatest danger (not) war, but financial collapse” memo to Eden 3/56: Horne,Macm’/1,P390. New MoD Sandys' job was more bang, less bucks. Everything he inherited was late, below Spec., above budget. The fix was, clearly, to shop in the PX, for whatever is good enough off-the-shelf (so: Sidewinder/Bullpup for RN); prioritise, incentivise and strive for what we must do ourselves...which was the Deterrent. 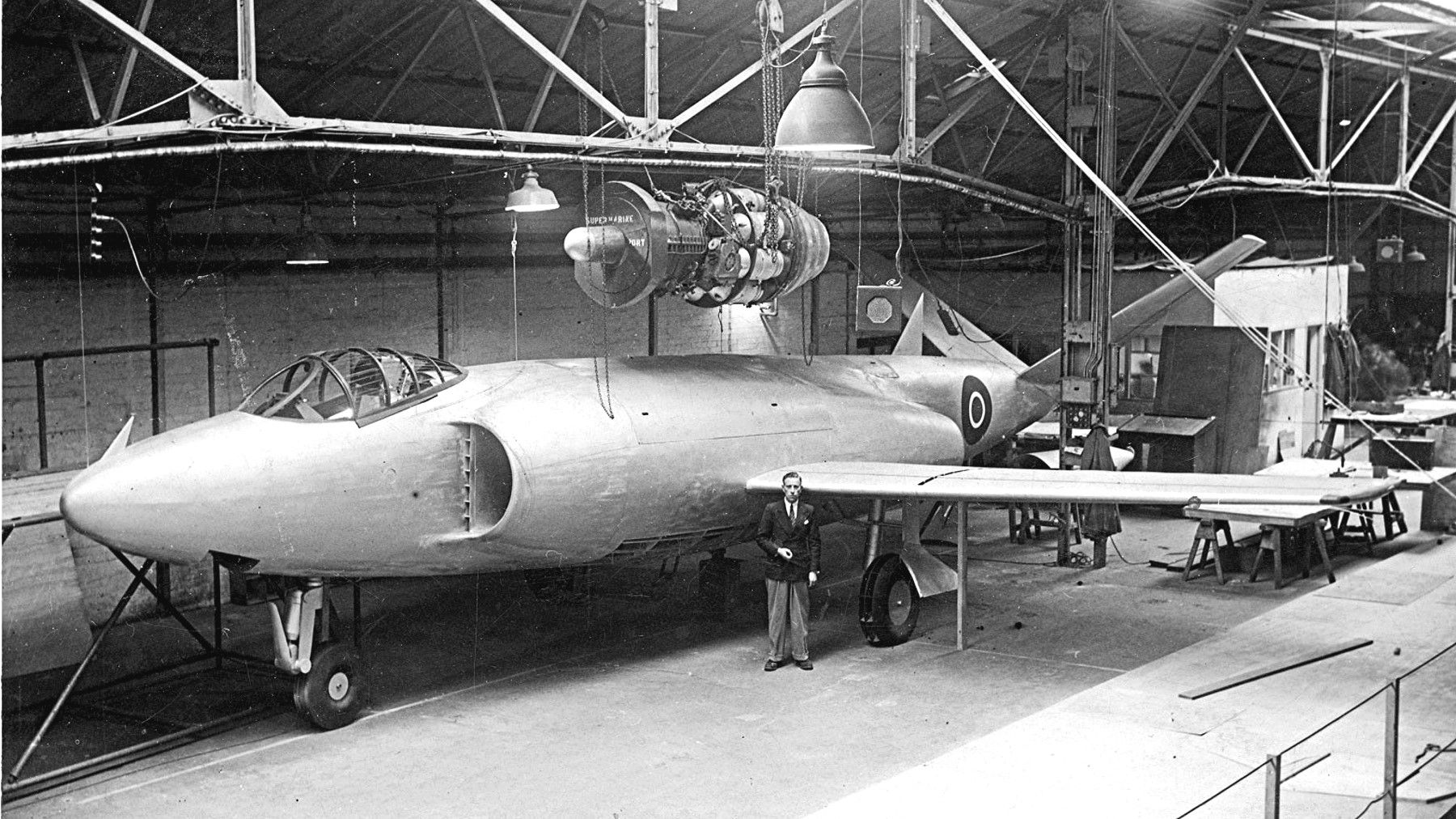 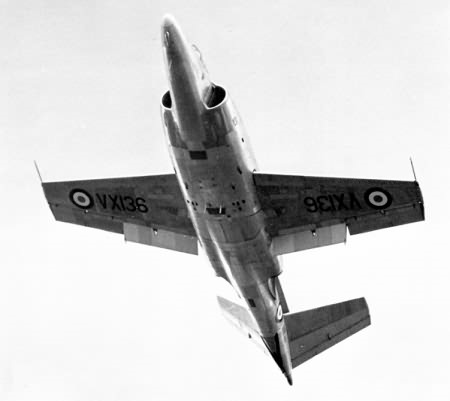 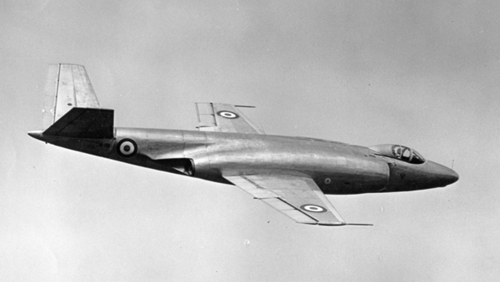 Does anyone know where pilot comments on these aircraft including the 576 can be found?
J

I have this book!
J

It would be really fascinating to see any drawings of strike variation of the Type 508 and other Scimitar's predecessors, i.e. the Type 522 and 537.
Does anyone here have anything?

I remember that a predecessor to the 508 was a light fighter, of similar configuration (i.e. straight wing and butterfly tail), was tendered to a naval (or RAF, I can't remember ) fighter requirement. The first tender was without an undercarriage, and was to be used on flexible deck carriers. Eventually, it was enlarged to fit a landing gear, and from there evolved into the Supermarine 508.

By tomorrow I should have created a list of Scimitar variants with a brief description of each variant. 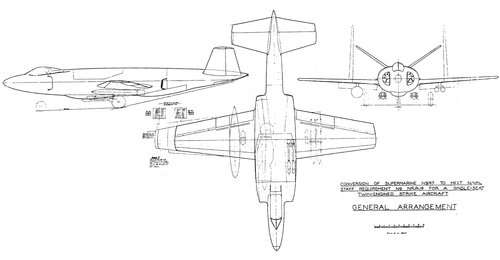 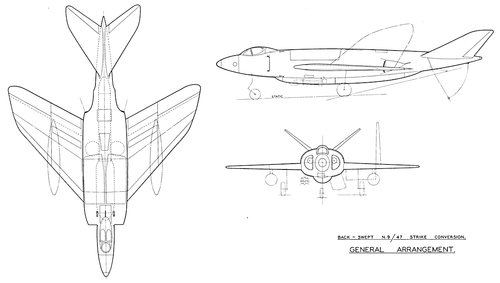 My list is finally ready. All information about the types has been taken from British Secret Projects 1 and British Secret Projects 2, both of which were written by Tony Buttler. Looking thoroughly through these projects was certainly interesting, and makes clear the long line of Scimitar predecessors and derivatives. This list has been separated between Fighters and Bombers (although the line between certain types does get a bit vague).

Type 505: Prepared for the Royal Navy (later made available to the RAF). Emphasis was placed on high rate of climb, so Supermarine designed the lightest possible airframe with the with the largest engine possible (the AJ.65) to provide as much power as possible. The wing was straight and made as thin as possible. This was possible due the the aircraft being designed without a landing gear., instead, a catapult would be needed for takeoff and landing required a mat, something which was being proposed for use on aircraft carriers in the late 1940s. The company also investigated the possibility of making a mixed-power single-engine and rocket aircraft, however, this would require a swept wing, and Supermarine stated that they would not develop this variant until sufficient amounts of information was available on these new technologies. Armament options included the 30mm ADEN cannon, a 4.5in (114mm) recoilless gun, or a 5.9in (150mm) rocket launcher. Although it was never developed, it was the first step towards the Scimitar.

Type 508: Straight wing V-tail prototype. Although it never entered production, it did lay the ground work for what became the Scimitar.

Type 511: A thorough proposal for an RAF two-seat night-fighter in two forms; a straight-wing and a swept-wing.

Type 525: Swept-wing prototype, originally designed with a V-tail, later changed to a conventional layout. Set in stone the design of the Scimitar.

Type 526: De-navalised interceptor variant of the 525, with a smaller wing area and a V-tail.

Type 555: Scimitar prototype fitted with a form of lift-augmentation.

Type 562: Designed for the interceptor and strike role, capable of carrying Sparrow II AAMs, along with bombs (including Nuclear ordanance) and Blue Jays. Two wing designs were proposed; one with a small aspect ratio and a large area, the other being one with reduced sweep and area.

Type 563: De-navalised Scimitar proposed to a Swiss requirement, not chosen for service.

Type 576: Supersonic fighter based off of Scimitar, originally designed as a strike aircraft. Provision for Firestreaks and Red Tops, along with air-to-air rockets.

Type 588: Studies to fit variable-geometry wings onto the Scimitar, as well as the Swift and the Lightning.

Type 522: Single-seat naval-strike aircraft based off of the 508

Type 561: Low-level nuclear bomber based off of the Scimitar

Type 562: Interceptor and Strike variants off the Scimitar

Type 565: De-navalised, tactical bomber variant of the Scimitar, designed as a Canberra replacement.

Type 572: De-navalised tactical reconnaissance variant of the Scimitar for use with the RAF.

Not an aircraft I have much time for, but I do have a little plastic one, about 1and a half inches, made in the early 60s by Corgi Toys in a range called Vapour Trails.
You can still buy an even smaller one as part of the air group on Airfix's 1/600 scale kit of HMS Victorious along with Sea Vixen FAW1s