icyplanetnhc (Steve) said:
Just so that I can avoid taking the other thread off topic, for all this argument of a massive difference in capture area, based on properly scaled front views of the Su-57 and the F-22 from official sources (Sukhoi's patent and Lockheed Martin), I'm getting a difference on the order of 5%. Mind you, in propulsion terms, 5% is not insignificant, but the actual flow field the inlets see will be different from a head on view, and given the functions that the inlet flow serves in addition to propulsion, frankly this difference is not worth noting.
Click to expand...

I will review my measurements, it was a long time ago when I did them. But I was careful and I was surprised with the results, I was expecting them to have quite similar capture areas

LMFS said:
I will review my measurements, it was a long time ago when I did them. But I was careful and I was surprised with the results, I was expecting them to have quite similar capture areas
Click to expand...

I've edited my attachment to highlight the capture areas with a red perimeter, for clarity. Again, inlet design consist of tradeoffs, and a larger area does not necessarily indicate superior supercruise performance for reasons of ram compression and spillage.

For general media, here is some VR footage of the Su-57 in flight.

So yeah, previously i shared my estimates on Su-57's frontal aspect RCS and then further elaborate on the IRST. During that time for a comparison i made myself an F-35A model and comparing it with the Su-57 one. Same methods and constraints. The F-35A one is explored here :


The F-35Amodel result is depicted here :


The result is as follows for the comparison. I planned it for a separate tweet but i guess given the new initiative i would do soon... This would do. 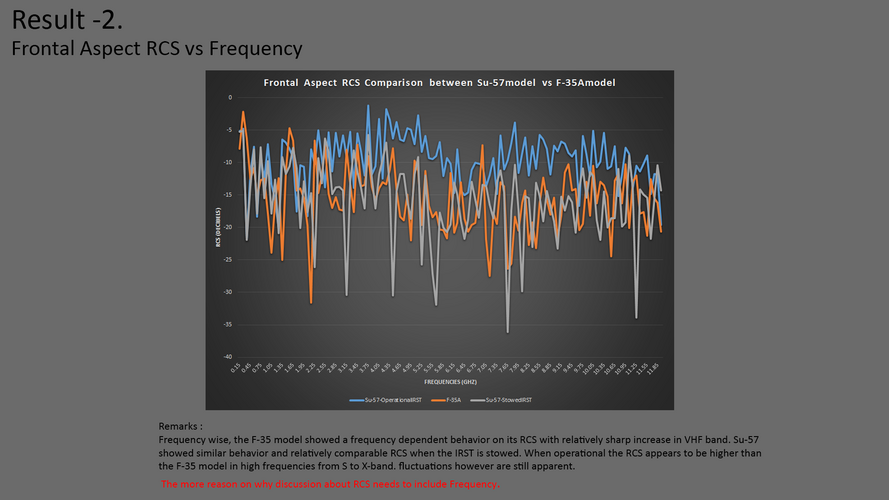 But well why stop there i wonder. The next initiative would be to include the air duct and thus for Su-57 modeling the radar blocker is a necessity. The blocker itself is based on available photographs and the following patent : 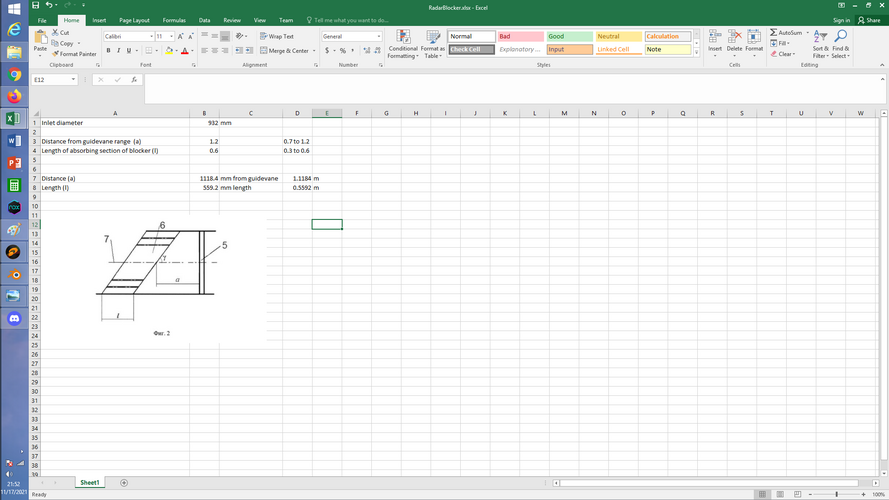 
In this case i assume the compressor diameter would be 932mm Thus resulted in selected dimensions, 60 degrees is later chosen for the angle of the blocker. I have bit of difficulty understanding the num 5 in the figure whether it is another blocker OR it is a section where inlet duct meet the "mouth" of the engine.

another difficulty is regarding the edge of the blocker which the patent doesnt give any explanation. Edge is important as it is a source of diffraction scattering. There is however treatment which to make the edge blunt (i will dig in the paper where i found that).

Another thing is whether i should add the inlet guidevane and the compressor face and how i should treat them, like leaving them as PEC or apply some form of absorbers. The simplest way is i think to leave it flat to "simulate" a worst case where the engine is not treated.

The calculations then used in the positioning of the blocker within the 3D model, depicted below :


Granted the layout could use refinement which is why i am posting it, maybe it should be "less S" than depicted or maybe it can use bigger duct inside instead of the assumed 932mm the same as the compressor face diameter.

The F-35A model will also undergo similar refinements like fixing some stuff and actually add the S-duct.


The only feedback so far is from one Chinese poster on twitter which curiously have "special" attention to my Su-57 result. Unfortunately his attitude leave lot to be desired particularly in two critical areas :

1.Appeal to authority, wanting realism is good but one should know the boundary
2.Complete negligience to the fact that RCS value is only useful when at least Frequency is given, he wants me to believe the 0.5 sqm RCS value cited in Su-57 patent but unable to provide the frequency. This is fatal as it's been demonstrated and common sense, RCS is a function of frequency too.

Those attitude is unfortunately was not the first time. The other one was in facebook post.
Such attitudes does not promote productive technical discussion at all.
A

Interesting results.
Su-57 has quite decent perfomance.
Will you model S-75 too?
S

Anduriel said:
Will you model S-75 too?
Click to expand...

http://www.su57.mariwoj.pl/su57-index.html An image from a very good site which also has other good imagery, saw one of its type here but have not seen this one on any of the Su-57 threads. 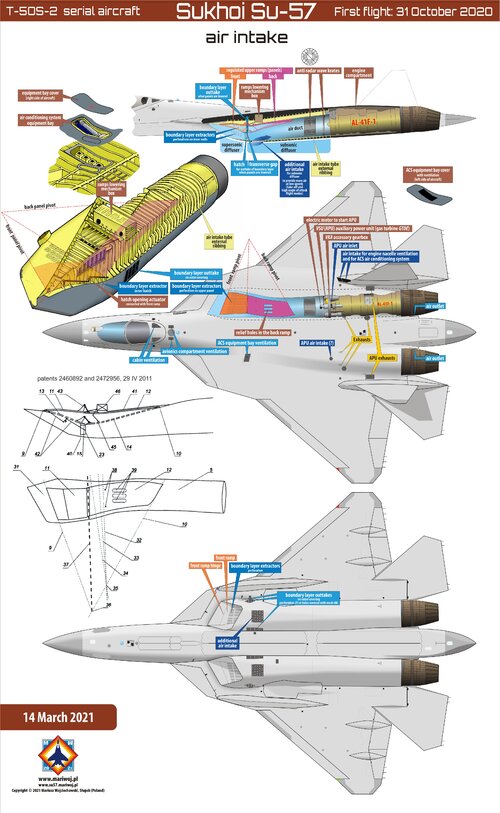 While a very decent infographic, it is lacking the clamshell bucket design of FOD protectors.

The Magika-MD hypersonic missile, which is planned to equip the fifth-generation Su-57 aircraft, will play a big role in increasing the combat power of the Russian Aerospace Forces, said Wang Yongqing, chief designer of the Shenyang Aviation Industry Institute. His article on the promising armament of the fighter was published by The Paper, the translation of the material leads InoSMI.

The new weapon for the Russian aircraft is still under development, flight tests have not yet been conducted and the characteristics of the "Larva" (this is the name of the experimental design work) have not been disclosed. Nevertheless, two key features of the missile are known. First, this is the first experience of developing weapons specifically for the Su-57 - the "Larva-MD" will be placed in the internal compartments of the aircraft and, thus, will not affect its stealth. Second, the rocket's new jet engine will allow it to reach a speed of Mach five, which will more than halve the time it will strike large surface ships.
The combination of a stealth aircraft with hypersonic missiles will significantly increase the strike power of the Su-57 and allow it to move closer to the target at a minimum distance.
- Russia pays great attention to reducing the effectiveness of the enemy's combat systems and defeating its key positions. Ultra-long-range air-to-air missiles are being created to destroy flying radars and tanker aircraft. For air battles, new long-, medium- and short-range missiles have been developed. At the same time, air-to-air and air-to-surface ammunition is developed in parallel, without shifting the emphasis to any of them. And the large combat load of the new aircraft allows us to equip them with missiles both for fighting in the air and for striking at the surface," Wang Yongqing said.
Last edited by a moderator: Nov 20, 2021
Share:
Facebook Twitter Reddit Pinterest Tumblr WhatsApp Email Share Link