all story is here;
http://www.coldwar.org/text_files/ColdwartimesMay2008.pdf

What's strange? It's written a dozen times in a text that this is IL-14 (first with this designation).
Surely Ucon (Konstantin Udalov) has much more to add as always.
T

hello
Me i don't know this plane !
If you could give us more information i would be glad
I thank you
bye
H 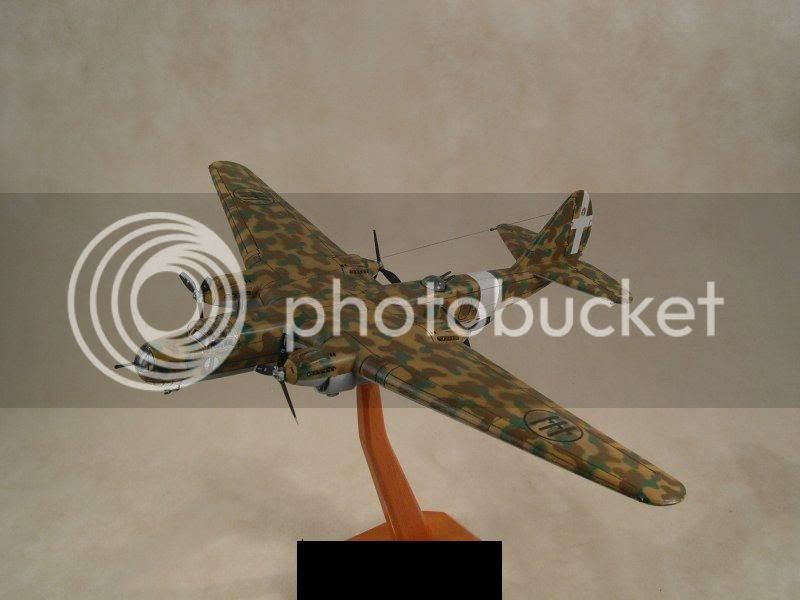 flateric said:
What's strange? It's written a dozen times in a text that this is IL-14 (first with this designation).
Surely Ucon (Konstantin Udalov) has much more to add as always.
Click to expand...

I know that,but its shape was new for me.

Thanks for the picture of the Piaggio P.50 model, I'd never seen that configuration before. Only the later four nacelle version. I don't suppose anyone has a three-view of it?
U

Hi to all!
Another Il-14 bomber I have found in my archieve. Note its tail!
Regards, Ucon

http://alternathistory.livejournal.com/1391098.html
"IL-6 became for the team of SV Ilyushin the last built bomber with piston engines. However, work on various projects of such aircraft continued in the OKB for quite some time. One of them was the project of the original high-speed bomber Il-14 (the first aircraft under this designation), intended for the replacement of the IL-4 and capable of exceeding the speed of 700 km / h. Work on it began in the spring of 1944. On July 12 of the same year, SV Ilyushin signed the general view of the first version of this aircraft.

Il-14 was designed by a two-seater (pilot and navigator), according to the high-wing scheme with a wing of a large elongation, with four AM-43 liquid-cooled engines AA Mikulin, which were installed in tandem at the ends of the center wing: two with pulling and two with propellers . The water and oil coolers of the engine cooling and lubrication system were placed in the sock of the wing center wing, due to which it had an influx in the area from the side of the fuselage to the nacelle. On the Il-14 bomber it was planned to install a chassis with a nose wheel. The front desk had to be retracted back to the fuselage, and the main racks - into the nacelle. In order to prevent the ends of the rear propellers from touching the ground surface during take-off, the tail section of the fuselage had to have an additional chassis frame with a wheel that in the released position at normal angle of attack during take-off and landing did not touch the ground. The installation of defensive weapons was not envisaged; It was assumed that the best defense would be a high speed aircraft.

July 19, 1944 the project was sent to the NKAP and the Air Force. Military specialists suggested that it be finalized by providing for the installation of defensive and offensive weapons on the aircraft. Maintaining the basic layout solutions of the first option, the design bureau carried out the specification of the project. In the new version, the aircraft had the same high-altitude scheme with four AM-43NV engines installed in a tandem. The takeoff power of each engine was 2460 hp. The wing had a large specific load on the area equal to 257 kg / m² and an elongation of 9.25.

The crew now consisted of four people. The pilot and the navigator were located one behind the other under one lantern: the pilot in front, and the navigator behind and somewhat to the right. In case of need, the navigator could help the pilot and even replace him. At the same time, cabin drawings were drawn up with the placement of two pilots side by side. In the middle of the fuselage, there was a cockpit-radio operator and an air gun with upper and lower mobile guns. The front hemisphere of the plane was protected by a stationary cannon, the pilot was driving a fire from it. The dimensions of the fuselage bomb bay were calculated for the deployment of one bomb weighing 2,000 kg or 2,500 kg of bombs of a smaller caliber. Provided external suspension of two bombs of 1000 kg.

Studies in the wind tunnels of TsAGI have confirmed the possibility of achieving such high computational data. In the beginning of 1945, working drawings were issued, and then, in accordance with the plan for the experimental construction of the NKAP in 1945, the construction of an experimental machine began. The state mock-up commission for the aircraft took place on June 8, 1945. After acquaintance with the drawings, schemes and inspection of the Il-14 under construction, the commission approved the aircraft as a whole, but recommended completion of its construction in the variant with a two-seater cabin of pilots sitting side by side, to increase ammunition of defensive weapons and install Paired guns to protect the rear hemisphere, with guns at the top and bottom should provide a round-fire.

Despite the positive conclusion of the military, in connection with the end of World War II, the construction of a prototype Il-14 aircraft was stopped. In the spring of 1946, after a well-known speech by W. Churchill in Fulton, delivered in the presence of US President G.Truman and proclaiming the beginning of the "cold war," an attempt was made to develop, based on the design of this bomber, a heavy barrage fighter with radar equipment and a powerful offensive Armament consisting of two cannons of caliber 45 mm with a total ammunition of 400 rounds. The aircraft was designed to repel massive raids of heavy bombers such as Boeing B-29 and B-50, which were in service with the US Air Force. But, as you know, the government of the USSR made a bet on the creation of a more promising defensive weapon - anti-aircraft guided missiles"