2.98 m low pressure air compressor/blower was driven by 49100 hp 20000 rpm steam turbine via 1/9.5 gearbox. Water pump was driven by a separate 7930 hp steam turbine. Exhaust steam was condensing in radiator heating compressed air to 385F. At sea level at 59F two engine aircraft was designed to fly at 685mph or Mach 0.9. Thrust of each engine at these conditions was 28257 lbs.
There were also some theoretical engineering papers on steam turbine turboprops, turbojets/turbofans, and air cushion vehicles.

REVIEW OF THE STATUS OF SUPERCRITICAL WATER REACTOR TECHNOLOGY​ 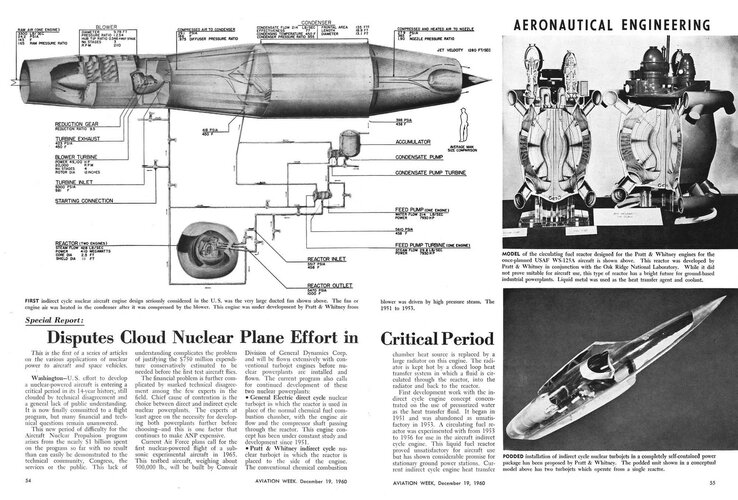 Test results were not very good. Engine efficiency was below 10%, less than promised 16-20%. Engine had to work at lower temperatures because of the problems with high pressure piston/cylinder lubrication. The powerplant was finally installed into a sea boat.

In 1930s in Soviet Union several R&D organisations were attempting to build steam turbine powerplants for the Tupolev TB-3 and TB-4 aircrafts.
There were 2x1500(1800) hp up and 2x3000(3600) hp poweplants designed. Weight was 3600 kg and 9000 kg for the complete system.
The compact lightweight steam turbines and steam generators were successfully built.
But steam condensation was not achieved. Condenser size, weight and power of the cooling fans was so large that aircraft could not take off.
The test of the 1500 hp steam powerplant in 1937 achieved only 800 hp at take off setting.

Hilbert Schenck, one of the engineers who was designing steam condensers for the ducted blower engine, wrote in 1988 a sci fiction book " Steam Bird", in which he briefly described the design and operation of such aircraft with ten steam turbofans.
M

1952 study "Basic performance characteristics of the steam turbine-compressor-jet aircraft cycle" by A. Fraas and G.Cohen.

Calculated Condenser Performance for a Mercury-Turbine Power Plant for Aircraft​

Another possible application for the steam Rankine cycle was a heavy lift helicopter or vtol aircraft.
Potassium and mercury vapor, and organic Rankine cycles using fossil fuel or fission energy were applied to three different size helicopters - 2x500hp, 2x1500hp and 2x10000hp. Vapor condensers were installed in downwash air flow from the main rotor:

The only working model of the steam turbine ducted blower motorjet was built and tested in 1997:

"Abstract
The Thermo Induction Turbojet operates by drawing in air and compressing it in an axial flow compressor 1. Front here it is passed into combustion chamber 6 where it is mixed with fuel from nozzles 5 and burnt. The rapidly expanding hot gases pass around convoluted water tube 10 and over encased steam turbine 3, exiting through jet nozzle 12. Water supplied from pump 8 is force circulated through water tube 10. This cools the combustion chamber and produces high pressure steam. The steam is fed via nozzles 11 to steam turbine 3, thus rapidly rotating it, the connecting shaft 2 and compressor 1. Exhausted steam exits the turbine via ducts 13 and manifold 14. From here it travels via pipe 15 to a suitable condenser in the front of the engine. Condensed water is recirculated via pump 8."

"Abstract
A gas turbine engine is disclosed which has an integral steam power system consisting of heat absorbing boilers which convert an unpressurized liquid into an expanded and heated steam by utilizing heat normally lost through component cooling systems and the exhaust system. Upon completion of the steam power cycle, the steam is condensed back to a liquid state through a condensing system located within the compressor and other functional components of the gas turbine engine. A system of high pressure air and friction seals restrict steam or liquid condensate within designed flow bounds. The gas turbine engine disclosed is designed to give improved fuel efficiency and economy for aircraft and land use applications."


These ideas are are not new.
Campini was originally working on such powerplant in 1930s:

There was experimental installation in 1942:


''News has now reached us that the Breguet Aircraft works at Toulouse is building an experimental jet-propelled machine to the designs of R.Leduc.This French engineer is well known for his work in connection with the problem of jet propulsion.As reported in the fourth article on the subject appearing in the October 9th, 1941, issue of Flight, Leduc patented a thermal jet system in the year 1933.' According to Inter Avia, the new experimental type is basically similar in principle to the Caproni-Campini machine, but with one important exception.Whereas the Italian craft uses a standard type of air-cooled radial engine to drive the air compressor unit, Leduc employs a steam turbine of the VUIA type for this purpose running at 3,000 r.p.m.under a steam pressure of 1,910 lb.per sq.in., the turbine is estimated to develop 1,200 h.p. Experiments, presumably on the test bed, are claimed to have given satisfactory results.No details are yet available, however, of either the boiler or the necessary condenser plant.Obviously, the steam system would have to operate on a closed cycle.Condensing raises further problems which are not easy of solution in an aircraft instal-lation.The condenser would, most likely be placed in the main air stream so that heat transferred from the steam would be usefully absorbed for the propulsive jet.The development of a jet-propelled aircraft employing such a system will be watched with intense interest by designers throughout the world.''
M

Most recent projects with the rankine cycle aircraft powerplants: