With development already started during the German occupation, the SO.6000 Triton was the first
French indigenous built jet aircraft, mainly used as a test aircraft for different jet engines. Modification
into a jet fighter was contemplated, but with the SO.6020 Espadon already already under construction
and with the prospect of considerable changes and in the end only mediocre results, the career seemed
to be at the end, with the handful of prototypes either to be scrapped or at best donated as exhibits
to museums. At this point i 1949, the General of the AdlA, Frédéric de Drapeau-Blanc insisted on his rank
for getting a flight in the second seat of the Triton N° 04. He was fascinated by the fast and smooth ride
in this aircraft and asked for it as a personal transport. SNCASO jumped on the bandwagon, as it was regarded
as a way to make some money of this design and proposed a slightly enlarged version with four seats.
The designation wasn't changed (the prototypes of the SO.6000 differed considerably fom each other either)
and it was just called Triton II.
18 examples were actually built and they were a kind of status symbol amongst the brass of the AdlA, serving
much longer, than originally envisaged. In the end, the long utilization of this type even led to a scandal in the
military service, because it was kept in service even long after the Morane Saulnier MS.760 Paris was available.
Reports about the high maintenance costs were published in several french newspapers and made two generals
resign from active duty. It was revealed, that they favoured the Triton II over the Paris not because of their
performance, but because it allowed boading via a car type door, instead of climbing above the cockpit sill. High
ranking military officials can only very rarely be found amongst young men !


ATTENTION ! This story is completey faked, not true and absolute nonsense!

Mind if I share my equally imaginary Triton III here, while we're at it? ;D

Developed from the lessons learned with the original Triton prototype (the very first French jet aircraft), the SNCASO (Sud-Ouest) SO-6650 Triton III was an elegant aircraft but a poor airliner.

Air France took delivery of 5 four-jet Tritons in November 1951 for use on short range local lines, but clearly this was a type in search of a purpose, being the size of a business jet at a time when the concept did not yet exist, too small to make an efficient airliner and too costly to make it worthwhile. 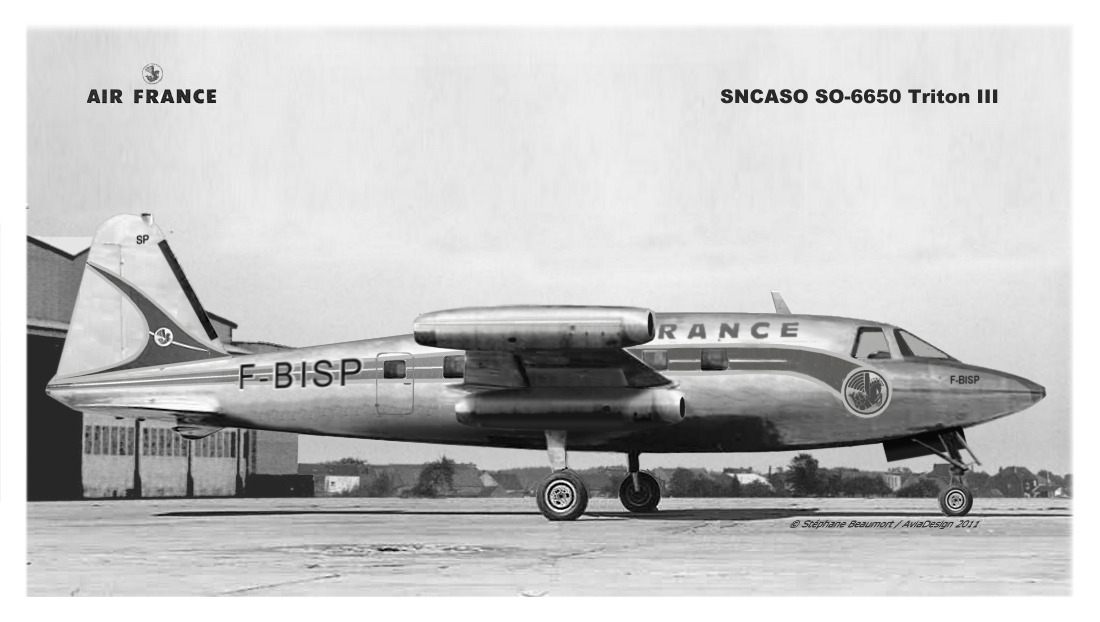 Skyblazer said:
Mind if I share my equally imaginary Triton III here, while we're at it? ;D
Click to expand...