Do you have a link for the entire presentation?

Thanks, I have been trying to find SDB theoretical weapons loadouts for various platforms like the B-2, B-52 and B-1. I remember reading somewhere (cannot find it now) that the B-52 in a low threat counter air environment can carry close to 200 SDB's? With GPS means 200 aimpoints per sortie, incredible.
L

Any details on what type of explosive and how much are in the SBD?

I hope that's just a (poor) artist's impression of what an SDB II would look like. I can't think of more complicated and impractical layouts than a forward-swept wing three-lifting surface. Are they trying to achieve post-stall maneuverability ???
The current configuration works just fine.

Any details on what type of explosive and how much are in the SBD?
Click to expand...

The actual warload for the B-52 seems to be only 32 SDBs (one BRU-61/A rack with four SDBs on each station of the Common Strategic Rotary Launcher).

The B-1 could carry 96 SDBs, because it has three Conventional Rotary Launchers that could each carry eight BRU-61 racks. (This hasn't been done yet, but it is in the Air Force's "wish list" for future projects.)

The B-2 has been widely cited as potentially carrying 216 SDBs, but Global Security has a nice dissection of why that isn't likely (short form; the weight of the SDBs and their racks would be about twice the nominal capacity of the B-2's bomb bay.)

Hopefully they come up with a different nose if they want to drop them supersonically. ???

I think the weight figure stated by Wikipedia for the bomb's explosive content is rather inaccurate. I can't find any common consensus but several sources I put above Wikipedia give different weights.

sferrin said:
Hopefully they come up with a different nose if they want to drop them supersonically. ???
Click to expand...

What makes you think they can't drop them at supersonic speed with the semi-sphere nose? Plenty of very fast things with such an aerodynamic front end.

sferrin said:
Hopefully they come up with a different nose if they want to drop them supersonically. ???
Click to expand...

What makes you think they can't drop them at supersonic speed with the semi-sphere nose? Plenty of very fast things with such an aerodynamic front end.
Click to expand...

Article has neat picture of SDB II's internal carriage on an F-35.

Since the F-35 news thread is currently out of action:

Grey Havoc said:
Since the F-35 news thread is currently out of action:

Knowing why it's out of action why would you then attempt to start it in another thread?

sferrin said:
Knowing why it's out of action why would you then attempt to start it in another thread?
Click to expand...

“There’s more possible for StormBreaker – options like adding propulsion or swapping out the seeker depending on the mission. The hardware and software can cover a range of threats,” Howlett said. “It’s a very flexible weapon – one-of-kind with world class technology.”

Another key benefit of the StormBreaker system is its networking capabilities. This means one platform could launch it but hand off controls to another. That will be an important capability as the U.S. military aims to connect sensors, platforms and weapon systems across the traditional domains of land, air, sea and space.

“It’s certainly an advanced weapon in terms of its design and development and how we’re architecting it for the future. It’s extremely capable now and we’re just getting started,” Howlett said.

To verify system performance, the team uses an integrated flight simulation, or IFS, and literally runs thousands of iterations in tandem with the Air Force using data from testing to continuously improve simulation accuracy.

“It allows us to find and address potential issues before real-life testing, which drives down schedule and cost,” Howlett said.

“Each aircraft has unique software, so we need to ensure we’re integrating appropriately with that software,” Howlett said.
In 2020, the Air Force cleared the system for use on the F-15E, making it the first aircraft to carry the weapon. After achieving this milestone, the Air Force and Raytheon Missiles & Defense dropped 14 StormBreaker smart weapons in the 2021 Weapons System Evaluation Program. The successful evaluation and tactics development paves the way for its use by combat air forces.

The F-15E can carry five groups of four StormBreaker smart weapons, for a total of 20 munitions. Depending on the mission, the F-15EX Strike Eagle II can carry more than 16 StormBreaker weapons.

The F/A-18E/F Super Hornet will be the second fighter jet to add the weapon when it reaches initial operating capability.

Raytheon Missiles & Defense is integrating the StormBreaker weapon on the F-35 Joint Strike Fighter. The first-ever StormBreaker munition drop test from an F-35 was conducted in late 2021 to test the communication link between the weapon and a secondary aircraft.
Click to expand...

F-35B test drop (shared by the US Air Force) 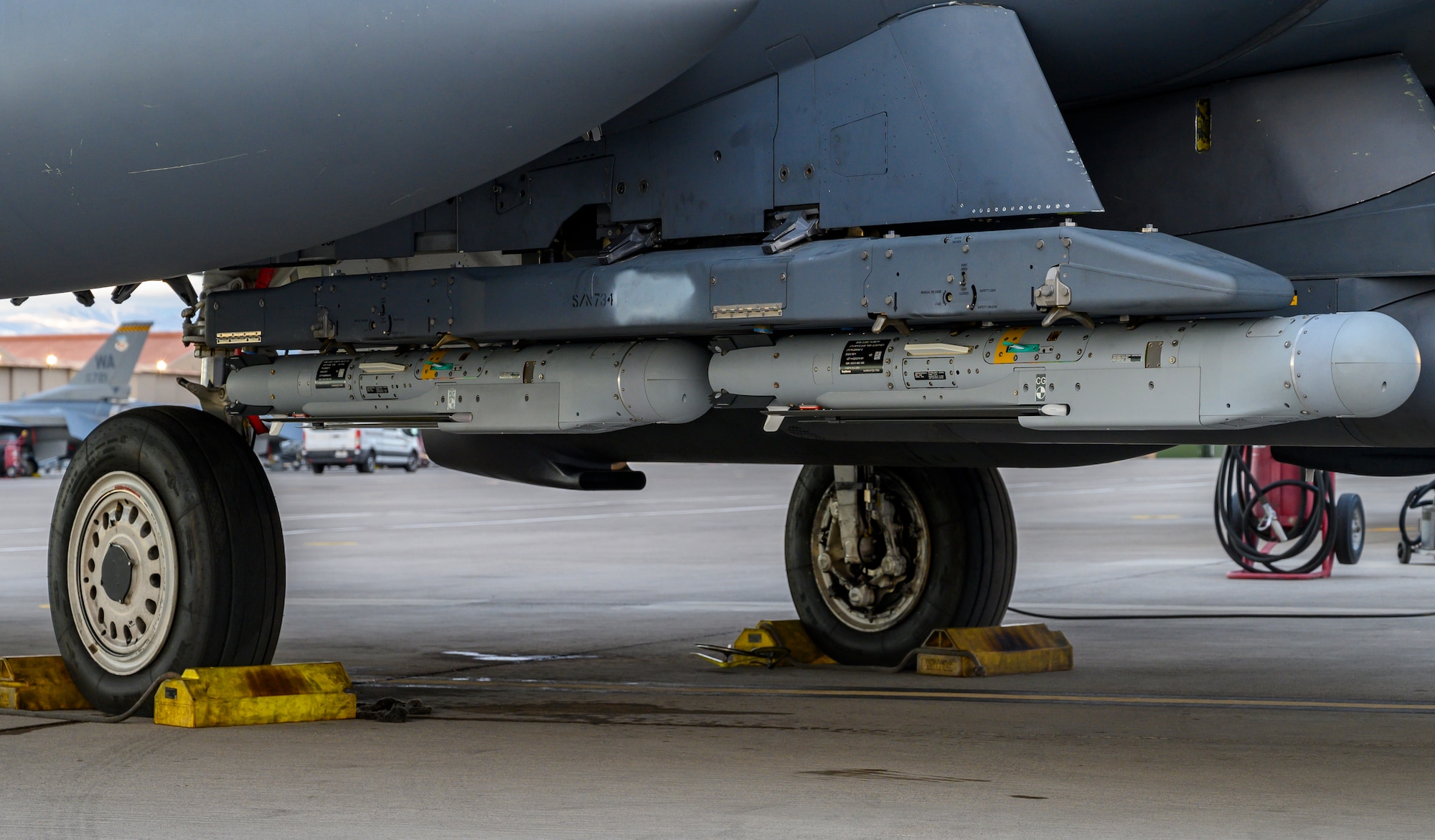