Ever heard of Sloane flying boats? Neither did I.

And yet, if we are to believe an article reproduced below from the magazine Aircraft dated March 1914, they were not only quite advanced from a technical viewpoint but also pretty well advertised. So whatever happened to the name Sloane? Why and how did it disappear in near-limbo?

If you have other documents related to that company, let's see them in this thread. Let's keep the Sloane name alive!

In accordance with its expansive policy for 1914 the Sloane Aeroplane Company of New York in addition to producing several new types of military monoplanes and biplanes, is bringing out improved types of flying boats.

These are built in three types, i. e., (1) "Sea Scout," a large surfaced boat capable of carrying considerable weight and having a flight range of 6 or 7 hours at a speed of from 55 to 60 miles; (2) "Navy Speed Scout," a medium surfaced machine of unusually small head resistance and with a speed range of from 45 to 80 miles per hour and a duration of five hours when fitted with a 130 H. P. Samson Motor; (3) "Sporting Type," a medium surfaced boat of extremely strong construction and light weight, which, coupled with its low head resistance and light powerful motor, makes it a very efficient, economical and speedy craft.

The hull is of the single step type, built up of two-ply mahogany and canvas, copper riveted, over a framework of ash and spruce ribs. The planing surface is 36 inches wide and V-shaped to give greater strength and permit of starting and landing in rough seas. Eight water-tight bulkheads are fitted with inspection covers to each compartment.

The nose of the boat has been rounded off and stream-lined in such a way that it offers the least possible head resistance, and at the same time affords the maximum of protection from wind and waves. Ample space has been provided for wireless and marine equipment, as well as all navigating instruments.

In the "Navy Sea Scout" and "Speed Scout" types, the rounded front is swept back to just in front of the operators' seats and is given a slight curl up at this point to form a wind and spray shield, which, at the same time, gives a absolutely perfect vision over the front and sides.

In the "Sporting" type where the non-obstructed vision is now of such absolute importance, or on a "Navy Dispatch" type of boat with which long cruises have to be made, a permanent cabin is fitted. This cabin which is constructed of a light framework and entirely covered with transparent pyraline sheeting has its after-part hinged so that it can be tipped forward for entrance or exit to the boat. It is so designed that either occupant by leaning slightly sideways will have an absolutely unobstructed view in front and by rising slightly can see entirely over the top of the cabin. The chief advantage of this cabin is that it affords protection from heavy spray when rising out of rough water, and in consequence prevents shipping water.

The two front seats, which are placed side by side in a position affording the utmost comfort and security, are arranged with double control of the well-known Deperdussin type. Behind the operators' seats and immediately between the two planes is the passenger's seat, which, while affording the maximum of protection from wind and spray, gives a good view in all directions.

In the design of the hull itself special attention has been given to making it both very strong and seaworthy, and at the same time a quick riser. For this reason the planing bottom has been set at a predetermined planing angle and so shaped that the V-bottom, while affording the maximum of strength does not rob it of its efficiency. The rear of the hull is shorter than on most flying boats so as to eliminate tail drag. In other words, the hull design of the Sloane Flying Boat combines the best features of the bat boat and flying boat types of machines without any of their disadvantages.

The planes are of single piece construction, monoplane style. The top one has a span of 35 feet with a chord of 6 feet, the bottom one having a span of 23 feet and a chord of five feet six inches.

The wings are constructed on two deep and very strong main beams and in accordance with the usual efficient monoplane construction have the beams set quite a distance from the front and trailing edges.

The ribs which are of a highly efficient monoplane curvature, very light and strong, are placed close together with light false ribs between every one. This gives a very smooth and efficient plane form without any sagging between the ribs or loss of wing curvature as is found on most biplanes.

Strong diagonal bracing is used to truss the planes internally so that there is no bending or straining when in flight.

Special attention is called to the use of only two uprights on each side of the engine section. This arrangement, aside from cutting down head resistance and in consequence affording additional speed and efficiency, also presents an advantage in permitting the top extensions to be folded down when the machine is not in use. Therefore, the machine can be stored in small places or left in the open with greater safety than the average machine, owing to the fact that with the extensions folded the wing surface presented to the wind is greatly cut down. In addition, since the extensions present a downward angle when folded in they prevent the wind from getting under the planes and blowing over the craft.

For extended sea work these extensions, modified somewhat, will be folded from the operator's seat so that in case of emergency the wing area can be cut down while the craft is riding on the water.

All stress and strain have been carefully worked out and a factor of safety of six to one allowed for. The main guy wires, which are of 1/8 and 3/32 steel cable, are doubled throughout fitted with extra strong turnbuckles and this in conjunction with the deep monoplane main beams makes the main cellule unusually strong. All control wires are doubled and extra strong. There are no single elevator and rudder wires as on most machines.

The ailerons each measure 9 feet by 2 feet, and owing to the cut away shape of the tips of the wings and their position at the extreme end of the planes they give the maximum of control with the least amount of drag. They operate in the usual manner; one up and the other down.

The rear stabilizing fin which measures 7 feet x 8 feet is flat and set at a slight lifting angle so that in flying it carries its own weight. The design of the machine has been so worked out that its tail varies its angle for the different speeds in flight, and in conjunction with the low head resistance of the craft permits of a considerable range in speed. It is built in two parts and hinged to the vertical fin so that it can be folded down out of the way.

The two elevating flaps which measure 3 feet deep are spread out so that they operate in a position to give the utmost leverage and control, with the least possible drag and resistance.

The combination braces and control levers of the elevating flaps are made of steel tubing and are so fitted that by merely unfastening one turnbuckle all the bracing can be taken off intact and the steel braces folded down flat against the elevators and ailerons. The combination air and water rudder is hinged to the rear of the boat and its vertical fin swings between the two elevator flaps. This is also fitted with collapsible braces.

The main gasoline tank, which varies in size according to the type of machine, is in all cases carried in the hull under the rear seats in a position approximately under the center of pressure. In all machines the tank capacity has been figured out to allow for flights of at least five hours' duration. These tanks are of the pressure type and the air pressure is supplied to them by means of a small air-driven propeller which operates through the speed of flight.

The gasoline is forced to a small gravity tank situated in front and slightly above the carburetor. The air pressure gauge is fitted in front of the operator, so that he is informed of the pressure in the tank at all times. A gasoline hand pump is fitted to supply pressure in cases of emergency.

Either 80 or 100 H. P. Gnomes will be used as standard equipment. This can be varied, however, and domestic motors of 100 H. P. or more used if desired. In the "Speed Scout" type of machine a 130 H. P. Salmson Motor will be used. In all cases the Motor is mounted midway between the two planes so as to bring the center of thrust more in line with the centers of resistance and weight; thereby relieving the drawbacks and dangers of the high thrust.

Ah, the company which made the delightfullly named Sloane Tractor - long before the name was applied to Range Rovers in West London!

A beautiful Sloane ad published in the May 1914 issue of Aircraft:

This Sloane ad appeared in Aircraft from June to October 1914.

Something I find especially interesting here is the range of terms used in those days to depict the various types of aircraft: Aeroplanes, Monoplanes, Biplanes, Hydro-Aeroplanes, Flying Boats and Aero-Skimmers.

I came across these pictures of a Sloane Flying Boat on the NASM website. Both are dated 1914. 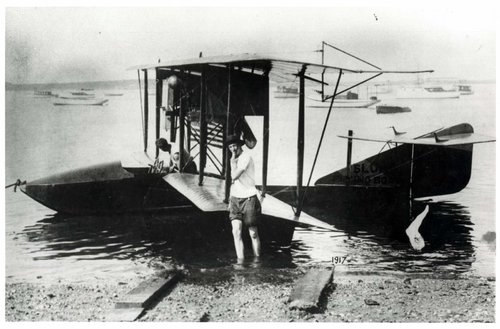 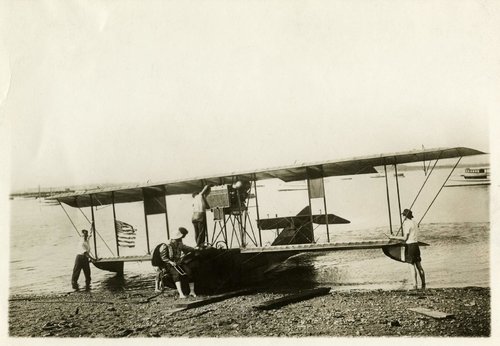