Splitting this out of the astronomy thread.

All in the Timing V

9 grouped Anomalies Appeared then Disappeared on a Star Survey in 1950 with Dr. Beatriz Villarroel:


Here’s the related paper to the above:

Abstract
Nine point sources appeared within half an hour on a region within ∼
∼
10 arcmin of a red-sensitive photographic plate taken in April 1950 as part of the historic Palomar Sky Survey. All nine sources are absent on both previous and later photographic images, and absent in modern surveys with CCD detectors which go several magnitudes deeper. We present deep CCD images with the 10.4-m Gran Telescopio Canarias, reaching brightness ∼26
r
∼
26
mag, that reveal possible optical counterparts, although these counterparts could equally well be just chance projections. The incidence of transients in the investigated photographic plate is far higher than expected from known detection rates of optical counterparts to e.g. flaring dwarf stars, Fast Radio Bursts, Gamma Ray Bursts or microlensing events. One possible explanation is that the plates have been subjected to an unknown type of contamination producing mainly point sources with of varying intensities along with some mechanism of concentration within a radius of ∼
∼
10 arcmin on the plate. If contamination as an explanation can be fully excluded, another possibility is fast (t <0.5
<
0.5
s) solar reflections from objects near geosynchronous orbits. An alternative route to confirm the latter scenario is by looking for images from the First Palomar Sky Survey where multiple transients follow a line. 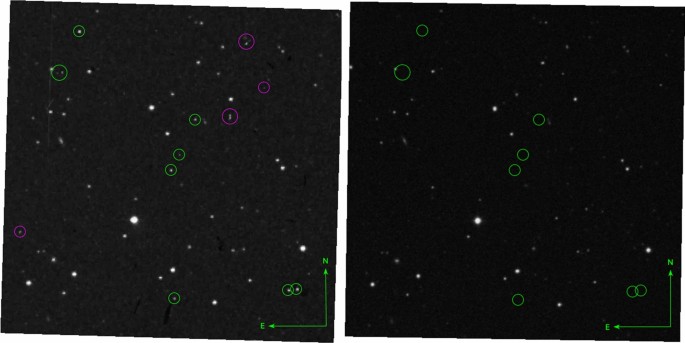 Nine point sources appeared within half an hour on a region within $$\sim $$ 10 arcmin of a red-sensitive photographic plate taken in April 1950 as part of the historic Palomar Sky Survey. All...

In 1957, astronomers of the Ohio State University started to scan the cosmos by means of a radio-telescope searching signs of radio transmissions from hypothetical extraterrestrial civilizations. Acting with an anthropocentric mind, they addressed their instruments to the stars Tau Ceti (spectral class G) and Epsilon Eridani (spectral class K) for being the nearest among those like our sun. In their search, they selected the wavelengths between 18 and 21 centimeters, corresponding to the spectral lines of the hydroxyl radical and the hydrogen, the band of electromagnetic spectrum named Water hole. They were looking for the existence of water in these star systems.

But water is not the only possible solvent for life chemistry, it all depends on environmental conditions. In 99 per cent of the cosmos, temperatures are so low that water can be replaced by liquid ammonia, liquid methane, liquid hydrogen fluoride, liquid nitrogen, liquid oxygen, liquid hydrogen, liquid helium, or liquid argon. Even mercury and lava could be considered in environments with extreme temperatures and pressures. Carbon is also not essential, which can be replaced by phosphorus or silicon.

The search has continued to this day using increasingly sophisticated equipment capable of simultaneously monitoring a large number of radio frequencies, but so far they have found nothing.

It is naive to assume that intelligent creatures from a distant star system use such an unpractical communication as radio (limited to the speed of light in a universe full of interference) just because it was the best channel we had in 1957.

Interstellar distances are so huge that the transmissions of our most powerful equipment are 50,000,000 weaker when they reach the Centauri System four years later and 1,000,000,000 weaker when they reach, if ever, the center of the Galaxy within 26,000 years. It may be assumed that a more advanced civilization than ours has had time to develop something more efficient.

Science Fiction writers have 'solved' the issue by imagining a subspace transmitter using faster than light (FTL) technology, something that violates Einstein's established paradigm. Everyone knows this is impossible, but it will finally be built by someone who did not know it... or we will stay here until the Sun freezes!

The FTL hypothesis starts out from the assumption that technological progress has no upper limit. But we must consider the possibility that the human mind be incapable of solving the problem. Nor can we lift a ton of weight, fly, run at 100 mph, breath underwater, or see Uranus, the heat, or the bacteria... but we have found a way to build machines that do it for us.

Maybe Artificial Intelligence will uncover the secrets of the FTL.
F

The Star That Can’t Exist (and why if we ever found one it might be the sign of an advanced alien race):

KIC 8462852 has started to dim seemingly exactly on schedule for a 1574 day periodicity of transits. If these dips do pan out they would seemingly confirm this orbit as they would repeat for the third time the ‘transits’, with three repeats being the standard for confirmation. The video isn’t too bad but annoyingly gets sidetracked about half way through onto Project Galileo.

r/KIC8462852_Analysis: This subreddit is for the discussion of the secular dimming trends of Boyajian's Star (aka KIC 8462852) using data from Las …

Of the two new videos he’s done on KIC 8462852 this is the better one as it’s a more sober coverage of the latest updates.