Nice AAM design, the seeker was later proposed in a modified form on the RB83 ASM. Entered full development as the primary AAM for the JA-37 Viggen in July 1975. It had a nitrogen cooled seeker and all digital electronics. Program was cancelled in April 1978 and replaced by Skyflash

Here is an earlier thread on the related B83:

It is surprising that the seeker - and not the airframe - was carried over from an cancelled AAM to a ASM.
Last edited by a moderator: May 30, 2020

Saab Rb72 Saab is working on a two-year SKr70 million
($16 million) full-scale development contract awarded last
July and could fly a fully guided prototype by the end of next
year. The company claims that the weapon, which is designed
for both medium-range interceptions and close-range dogfighting,
can be launched from any point in the operational
envelope of a modern combat aircraft.
The missile carries an infra-red homing head being developed
by Saab's Electronics Division. The short-wave seeker
has already been flight-tested in another airframe and is
claimed to allow even non-afterburning targets to be attacked
from all aspects. Digital signal processing is employed,
thereby maximising resistance to jamming and increasing the
seeker's ability to track rapidly manoeuvring targets. The
infra-red sensor is cooled by gas supplied from a bottle in
the launcher. Companies in Sweden, France and Germany
are competing to supply the solid-propellant motor.
Click to expand...

Why I really should change my personal text?

The Swedish missile museum site wasn't too helpful about this missile http://robotmuseum.se/Mappar/Robothistorik/05_Saab/AMF_rb_72.htm

Main points freely translated (by me and google):
By SAAB middle of 70's.
IR missile ordered by FMV (Swedish Defence Material Administration) on August 1974, SAAB got the deal June 1975.
For JA37 for aerial targets at any altitude. Passive IR. Special technology against IR-flares. Two channel radar based fuze of FMCW-type (I have no idea on what it is).
Gun powder (both Finnish and Swedish term directly translated) rocket as a motor. Project canceled 1977.

Modern missile for its time with high performance. Instead of continued development FMV decided to buy Sidewinder 9L for JA37 (RB 74). Which turned out to have lesser performance than RB 72.

disclaimer: All of the translation errors are by me, Swedish is my tertiary language (at best, It might be my quaternary).

tiikki said:
Instead of continued development FMV decided to buy Sidewinder 9L for JA37 (RB 74). Which turned out to have lesser performance than RB 72.
Click to expand...

Anyone know the reasons? I suspect unit cost might have been one. If (depending on the time the decision was made) you have a missile that's available right now vs. one that's possibly going to be better but still in flight-test stage, and the off-the-shelf design is being offered at a lower price per missile firing, that starts to look good to smaller air forces casting nervous glances over their shoulders and nations whose military budgets aren't near-infinite. Also, the nature of Sweden's air-defence problem, looking almost exclusively at short-notice inbound intruders, probably gave AIM-9L a lot of support from fighter pilots who wanted their entire armament to be capable of in-your-face shots.


(Red Top comes to mind as a solution, but I've heard differing opinions as to just how all-aspect Red Top really was. Some sources describe it as such without qualification, while others suggest it's more of a forward-quarter affair unless the target is clearly supersonic and generating a LOT of frictional heat. And then there's the issue of weapon system integration and the fact that for all its capability, it's a Sparrow-sized missile with aerodynamic performance nowhere near as good as later models of Sidewinder. Worst of both worlds.)


Contrast the US, which had the luxury throughout the 1950s and 1960s of having the entirety of Canada interposed between it and transpolar Soviet bombers, and could afford the time needed to get tail-firing positions for heat-seeking variants of AIM-4. 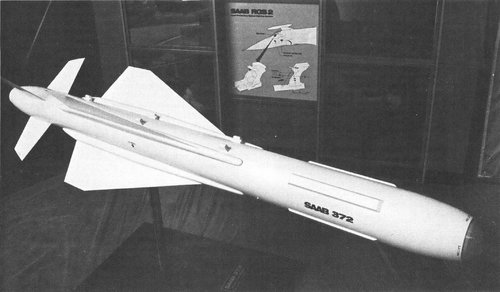 Swedish Missile
Paris—Swedish government is expected to decide this summer whether to start development of the new Saab Scania 372 infrared-guided air-to-air missile planned for the interceptor version of the Viggen. The weapon is designed as a highly maneuverable compromise between short-range dogfight and medium range requirements.

The new missile is one of three proposals awaiting government decision. The other two are the SKA ship-to-ship coastal artillery attack missile and the Saab 05B, a TV-guided variant of the earlier Saab 05A command-guided attack missile. The SKA is an advanced multi-mission launch-and-leave weapon, apparently similar to the U.S. Navy McDonnell Douglas Harpoon in its capability to be launched from the air or surface against naval targets.

The 372 air-to-air missile is 8.2 ft. long and weighs 209 Ib. It has cruciform-shaped stabilization fins stretching from midbody and a pair of cruciform-shaped control fins for making course and attitude changes.
Click to expand...

pathology_doc said:
(Red Top comes to mind as a solution, but I've heard differing opinions as to just how all-aspect Red Top really was. Some sources describe it as such without qualification, while others suggest it's more of a forward-quarter affair unless the target is clearly supersonic and generating a LOT of frictional heat.
Click to expand...

I have heard the latter, but given the nature of its intended targets, this was not seen as being an issue.

I have also seen the same performance ascribed to some later variants of IR AIM-4.