I have found a two volume series about Russian/soviet aircraft carrying ships including P 1553, P1160 and other projects not built:

I bought them and they look quite interesting at first glance. I am reading through them thoroughly, now.
F

Once you have read them, could you please post a review on this forum?

Once you have read them, could you please post a review on this forum?
Click to expand...

Yes please, with details on unbuilt project description and illustrations

The only unbuitl project with any great details covered is the nucelar Project 1143.7, the unfinished Ul'yanovsk from the end of the Soviet Union, the previous Project 1160 and Project 1153 nuclear-powered carriers from the Sixties and Seventies, respectively, are not given much coverage. The books are thorough in covering the built units with regard to equipment, weapons, and aircraft and look at the conversion of the Gorskov for India as well as new carrier and helicopter carrier designs for Russia. From the standpoint of the unbuilt designs, the books are a disappointment in that respect, though they do mention that Project 1153 would have shared a nuclear propulsion system with the Kirov-class heavy cruisers.

Addendum: Wayne Scarpaci's Soviet Battleships, 1933 - 1957 does contain a side-view of a Soviet post-WW II study from converting the hull of the unfinished battlecruiser Kronstadt into a full-up aircraft carrier but it was decided that the incomplete hull was too damaged from the ravages of WW II to be worth using.
F

Thanks a lot for your review.

Based on what you say and space/time/cost constraints I would say I prefer to wait for something more detailed. Perhaps sooner or later the US naval institute will publish a book on the topics.

Glad to be of assistance. I, too, was hoping for more on their earlier efforts. OTOH, I did learn a lot about the aircraft-carrying vessels they did build and use. 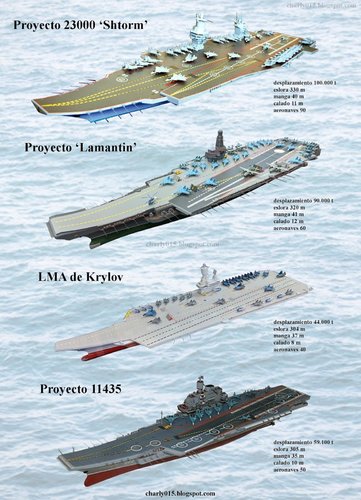