The Royal Navy's first new uniform in 70 years has been unveiled.

The previous light blue shirt and trousers, known as Action Working Dress, or No4s, have been worn at sea ever since World War Two.

The crew of the Portsmouth-based HMS Lancaster are the first to wear it. They head out to the South Atlantic on Saturday on a nine-month deployment.
'Bit out of date'

The new design, officially called the Royal Navy Personal Clothing System (RNPCS), has been tested on several ships and submarines, and according to the navy the feedback has been "mostly positive".

It is notable for its several layers, with interchangeable T-shirt, top and thermals, which can be worn depending on the climate.

It will offer more protection from flash fires, and badges denoting rank will now be worn at the front rather than on the shoulders. There is also a large White Ensign on the left shoulder.

Meanwhile, the trousers are lighter weight, have slanted pockets for ease of access, and smaller belt loops.

Cdr Peter Laughton, commanding officer of HMS Lancaster, said: "We are extremely proud and genuinely delighted to be the first ship to wear the Royal Navy's new uniform.

"It is a really practical, smart and modern uniform, and the extra branding allows us to much better represent our service.

"This will most certainly be the case during our current deployment where we are due to transit in excess of 30,000 nautical miles and visit up to 18 different countries."

Vice Admiral Sir David Steel, who oversaw the changes while in his previous post of Second Sea Lord, said the old look was "a bit out of date".

He added: "This is a modern uniform which suits a modern Navy.

"But the most important thing is that it is comfortable to wear in the extremes of climate in which the Royal Navy operates - from the Antarctic to the Gulf."

In the initial rollout about 22,000 sets of the uniform are being issued to operational and sea-going ships.
Click to expand...

Ace PR! Have the old one modeled by a porker broad-shouldered* chap.

*This is the term now used to classify rig workers for helicopter travel.

Compare with the Navy Working Uniform (NWU) of the United States Navy.

Kind of like the Para Military outfit that the average uniformed Police Officer wears these days, without a stupid archaic looking helmet.

The NWU, aka "aquaflage" and "the blueberry," is something of a mess. The new RN uni may not be a Starfleet uniform but it looks smart and well designed.

My only thought about this thread was "Well, now the complete uniform can be
cleaned in the same wash cycle, really a revolution economically".
But be prepared for the next thread : "The latest equipment of the highest rank
in the German high command"

The NWU, aka "aquaflage" and "the blueberry," is something of a mess. The new RN uni may not be a Starfleet uniform but it looks smart and well designed.
Click to expand...

US Navy enlisted uniforms in general have been something of a mess recently. The idea of a BDU-style working uniform isn't terrible, and the old denim and chambray dungarees were long overdue for replacement, but the camo was just plain stupid. They should have done a solid navy blue like the submariners' coveralls. (But that would have been too much like the Coast Guard, which actually has a practical working uniform.)


Then there's the whole issue of office wear for enlisted sailors. The round robin of Service uniforms has been a total waste of time and money. Frankly, I'm not sure why there needs to a uniform between a decent working uniform (Navy BDUs) and the crackerjacks. But if there is to be one, does it really need to scream "I wish I was a Marine" quite so loudly? 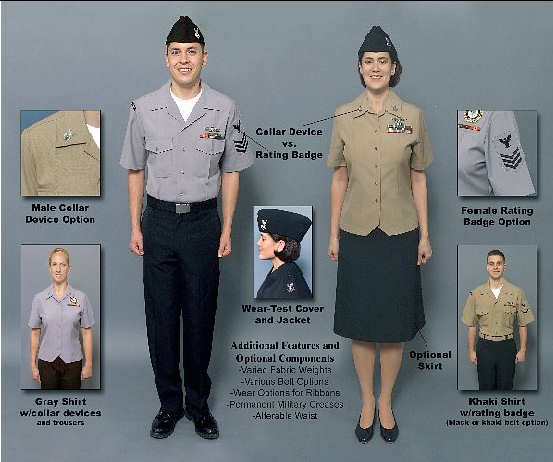 The USN aquaflage hides stains and mess, and it doesn't look like a mall cop. I think that the Aussie one looks best.

Swedish splinter uniform but in Aqua colors would be best. Dazzling.
R

I believe the RN has the right attitude - since when did a Naval rating need a Camouflage Uniform, except if he/she was attached to a unit fighting on land?

covert_shores said:
The USN aquaflage hides stains and mess, and it doesn't look like a mall cop.
Click to expand...

Its also hot, heavy, looks only slightly less sad than a mall cop, makes going over the rail a death sentence, and it's sexually attracted to fire. This new RN uni, like the Coasties' ODU, seems to have been designed by someone intelligent.

Moose said:
Its also hot, heavy, looks only slightly less sad than a mall cop, makes going over the rail a death sentence, and it's sexually attracted to fire.
Click to expand...

To be fair, solid dark blue isn't any better in the visibility department. I've done enough man overboard drills to know that spotting a person in the water just by eye isnt terribly dependant on clothes color anyway - it all disappears at a few hundred feet at best. Even bright yellow foul weather gear doesn't help, and reflectors only matter if they're somehow out of the water. People working on deck should be wearing float coats or inflatable harnesses with a MOBI and strobe light.

Jemiba said:
My only thought about this thread was "Well, now the complete uniform can be
cleaned in the same wash cycle, really a revolution economically".
But be prepared for the next thread : "The latest equipment of the highest rank
in the German high command"
Click to expand...

The rank, rating?, worn at the middle of the chest in an epaulette will take some getting used to. I presume that this is a unique design feature when compared to the world's Navy uniforms. It seems that the officers and crew like the new working uniform as more comfortable. I think working uniforms and fatigues are universally ugly and that's OK. These garments are worn for utility, not style. It seems to be a rather silly thing to get angry about and there seems to be plenty of anger in the United Kingdom concerning these uniforms.

I assume that rank positioning is meant to ensure that rank is visible while wearing a harness or breathing gear with shoulder straps that would cover epaulets. Both the US and British Army do the same thing and the USN has a similar rank tab on the fleece jacket and waterproof parka that go with the NWU cammo outfit.
Share:
Facebook Twitter Reddit Pinterest Tumblr WhatsApp Email Share Link