Came across this article on the "Save the Royal Navy" website:

The Astute class submarines were designed from the outset to be fitted with a Dry Deck Shelter (DDS) which significantly enhances their ability to covertly deliver special forces. Using unclassified public domain sources, here we examine the history, design and operation of the DDS in RN service.

The DDS fitted to the Astute class boats is a cylindrical chamber approximately 13m long by 3m diameter. In UK service it is formally named the Special Forces Payload Bay (SFPB) and was procured under ‘project CHALFONT’, although submariners nickname it “the caravan of death”. The DDS is not a permanent fixture and is designed to be attached or removed from a submarine within a matter of days. The aft section of the sail on the Astute class boats have removable panels. Securing points on the casing, hull penetrations, piping for high-pressure air and electrical supplies are in place ready to receive the DDS. Given the small number of SSNs possessed by the RN, only one boat is likely to be fitted at a time. HMS Astute first deployed with the DDS on an 8-month patrol in 2014 and HMS Artful currently carries the DDS which she first received in late 2016.
The Astute class reputedly have a lock-in/lock-out transfer trunk permanently installed inside the sail that allows diver access to and from the submarine while submerged. When the DDS has fitted, this chamber is mated to the ‘hangar’ which can accommodate either a Swimmer Delivery Vehicle (SDV) or up to 20 divers and their equipment. (The US Navy version also has a hyperbaric decompression chamber forward of the transfer trunk but the UK version does not appear to have this facility.)

To perform a mission, the special forces personnel and the support divers enter the hangar and dress in diving gear. The compartment is sealed and then flooded up to equalise with outside pressure. The large hangar door is opened and the rails used to guide the SDV onto the launch cradle mounted on the casing are extended. The SDV is winched out onto the cradle and the SF personnel get on board, prior to it being released. After conducting their mission the SDV pilot may locate the mother submarine by active sonar pings. When the SDV returns, support divers secure it to its cradle, winch it into the DDS, shut the hangar door before the water is pumped out.

Controlling the submarine during this process is demanding for the crew as precise depth needs to be maintained while the boat remains in a stationary ‘hover’. Too shallow, and the boat could break the surface compromising the mission, too deep and the divers are at risk. When the DDS hangar is pumped dry, ballast tanks on the submarine must be filled to compensate for the significant additional buoyancy, this process must be reversed when it is flooded again.

If the SDV is not embarked, the DDS can be used with the submarine on the surface or just awash. Although less covert than using the SDVs, this allows a larger number of SF personnel to be delivered by dinghy. With limited space in the submarine and small hatches, the DDS hangar is a much better option to comfortably accommodate inflatable dinghies with outboard motors. Alternatively, Mass Swimmer Lock-Out (MSLO) operations can be carried out with the submarine at shallow depths where SF personnel swim out of the hangar to targets at short distances (or inflate dinghies, once on the surface).

Using submarines for inserting commandos is nothing new but the DDS and SDV gives the UK an important increase in maritime SF reach. Carried underwater for thousands of miles, SF operators may be landed on a foreign shore, complete their mission and return undetected. Primarily used by the SBS (Special Boat Service), the SDV allows the very high-value nuclear submarine to stay further away from the coast and reduce the risk of detection. The SBS can covertly infiltrate coastlines to plant sensors, gather intelligence, deliver and recover agents or extract persons of interest. In a more aggressive role, they can deliver small teams to attack targets or destroy shipping in harbours. The UK’s possession of this difficult-to-counter capability is an important deterrent to potential adversaries, some of who may also have similar capabilities. Its covert nature may allow for live operations in ‘peacetime’ to gather intelligence on potential adversaries or conduct Maritime Counter Terrorism (MCT) activities.

From Alamanda to Chalfont

Small conventional diesel submarines were used successfully for launching commando raids and special operations during World War II and the practice continued to be developed after the war. HMS Opossum was involved in the deployment of special forces during the first Gulf War in 1991 before the last diesel submarine passed out of RN service in 1994. For better or worse, both the RN and the USN have adopted all-nuclear submarine fleets – not good news for the SBS, as large nuclear submarines are difficult to trim and manoeuvre precisely on the surface. They are also unsuited to operating in shallow waters and the littorals.

Despite their unsuitability, non-DDS-fitted nuclear boats have been used to launch SF operations. In 1999 HMS Tireless almost suffered a serious accident when exercising this capability in the
Mediterranean. The boat was trimmed down with the casing almost awash. Personnel and dinghies were being passed up through the engine room hatch when the boat hit a patch of less dense water and lost trim. Water began to pour down the hatch into the manoeuvring room, shorting out the propulsion control systems and the boat started to sink rapidly. Fortunately, the hatch fell shut under its own weight as the boat stern inclined down and the flood was stopped in time. The men left in the sea survived, although one was trapped in ropes and dragged under, fortunately managing to cut himself free.

Recognising the limitations of the nuclear boat in the role, the US Navy began to develop the DDS concept as far back as the late 1970s and the first DDS went to sea fitted to USS Cavalla in 1983. The DDS reduces both the chance of detection and eliminates the flooding risk to the submarine when opening its hatches at sea. For the RN, now down to just seven SSNs, It is hard to imagine any special forces operation that could justify the risk of losing at least 100 submariners and arguably one of the fleet’s most important assets costing well over £1 Billion.

In the late 1990s BMT and Kockums were contracted to design and build the first British DDS under ‘Project ALAMANDA’. The design was heavily influenced by the US experience but was tailored to suit RN submarines. The DDS was fitted to HMS Spartan which required expensive modification before going to sea in 2004 where the system proved successful in service. Unfortunately, to the dismay of the SBS, Spartan was decommissioned in 2006 and DDS capability was ‘gapped’ until the Astute class would be ready. To replace ALAMANDA, BAE Systems was awarded the contract for CHALFONT which has since delivered the DDS that is fully integrated with the design of the Astute class submarines the company is constructing in Barrow.

Diving operations in and around submarines are complex and dangerous, demanding skilled operators. Both the US and RN have suffered fatalities in the past while exercising SF submarine entry and exits. To help reduce these risks, training is conducted at the purpose-built CHALFONT Shore Facility (CSF) constructed by BAES at Faslane. The CHALFONT Diving Training Team is a group of clearance divers (reporting to FOST) who are tasked to ensure personnel are fully prepared for DDS operations. RN divers from the
Fleet Diving Unit One (FDU1) act as casing divers to support SF personnel when deployed onboard a DDS-equipped submarine. Probably at least 15 additional people need to be accommodated on the submarine when the DDS is going to be used. Despite being large and modern boats, the Atutes have very little spare accommodation and cramped mess decks. The ‘passengers’ add to pressure on space and probably make do with ad-hoc sleeping arrangements in the ‘bomb shop’ (Weapons Stowage Compartment) for their time on board.

When a submarine is fitted with a DDS it has a significant impact on its trim, transverse stability and hydrodynamic performance. The increased submerged resistance of the hangar may reduce speed and create additional noise. The integrated design of the Astute DDS has fairings where it joins to the fin which may help improve water flow compared to the fully separated hangar design of the ALAMANDA and US systems. Despite this, an Astute boat carrying a DDS will inevitably have a slightly reduced performance, particularly when operating in one of its most important roles – detecting and tailing other submarines. With such restricted RN SSN availability and a long list of tasks, it must be a difficult balancing act to decide when to fit the DDS and to which submarine.

The RN has put considerable resources and effort into maintaining DDS capability for its submarines. In September 2018 in a further endorsement of its importance, the UK placed an order for three new Mk 11 SDVs at a cost of around $90 million with US manufacturer Teledyne Brown Engineering. The contract includes spares, handling equipment, manuals, training and logistic support.

The RN currently has three ageing Mk 8-Mod 1 SDVs which are free-flooding ‘chariots’ able to transport 6 men in full diving gear. The pilot has basic navigation aids and the vehicle allows the divers to plug into an onboard air supply until they exit at the destination to complete their mission. (The speed and range of the electrically-propelled SDV are understandably classified.) The new SDV Mk 11 that is being procured (Developed in the US as the Shallow Water Combat Submersible (SWCS) programme) is larger at 4.5 tonnes, and fitted with an electro-optical periscope, passive sonar, ultra-quiet propulsion motors and inertial navigation systems, avoiding the need to surface to receive GPS signals.

Besides housing the SDV or special forces teams, the DDS has another potential benefit as a hangar for large-medium size unmanned underwater vehicles (UUVs). The submarine’s torpedo tubes could also be used to deploy UUVs but they would be limited to quite small vehicles by their 21-inch diameter. The ability to entirely covertly transport UUVs over long distances and then deploy on intelligence gathering or ASW missions is an attractive proposition for the future.

In line with the MoD policy of not commenting on submarine or special forces operations, unsurprisingly there is very limited public acknowledgement or discussion of CHALFONT and the capabilities it offers the UK. The level of investment it has received indicates this is a highly regarded RN asset and another example of its professionalism that few other nations can match.

HMS Artful seen with Dry Deck Shelter in the Firth of Clyde, January 2019 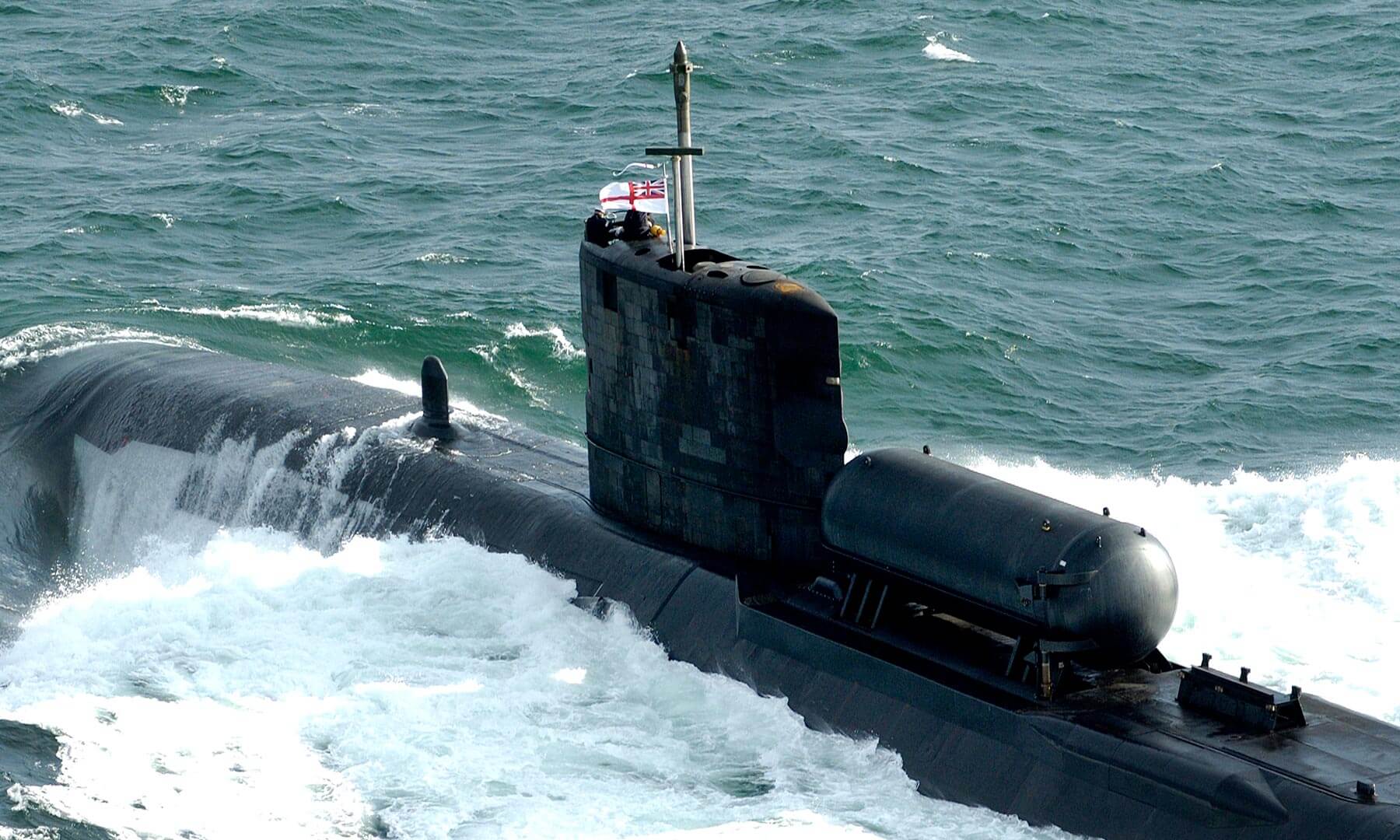 HMS Spartan with the ‘Alamanda-fit’, June 2004, the first RN submarine to receive a dry deck shelter.

CGI mock-up of the new Shallow Water Combat Submersible / SDV MK 11 with the sliding doors open to reveal the position of the seats. Squeezing into this vessel underwater for transportation to perform potentially dangerous missions at night is not a job for the faint-hearted or claustrophobic.