Grigorii Ivanovich Bakshayev was interested in the concept of variable geometry aircraft, where the size and/or shape of wings are altered according to the stage of flight, or desired characteristics. There are many methods of achieving this but one of the simplest is the telescopic wing, where wing sections of bigger area and, possibly, aerofoil section, are telescoped out over the original wing. Bakshayev designed the RK-I to use a telescopic wing with fifteen sections, of gradually increasing size, extending outwards from the fuselage to the demands of the pilot.

The RK-I fuselage was of light-alloy semi-monocoque construction with a conventional tail unit. The retractable tail-wheel undercarriage was attached to the fuselage, giving the aircraft a very narrow track, retracting into the fuselage and covered by doors. To reduce drag the engine sat in the nose, under a closely fitting cowling, and cooling radiators sat in ducts either side of the rear fuselage fed by long pipework.

The wings of the RK-I were very unusual in having tandem main-planes, used as guide tracks and supports for the hydraulically extending wing sections, which more than doubled the wing area when fully extended. The wings were of light-alloy and steel structure with 30KhGSA steel skins, only the rear wing having flaps and ailerons. Unfortunately for the RK-I Joseph Stalin was very interested in the project and insisted that the most powerful engine then available was used in the aircraft. This was the death-knell for the RK-I as the most powerful engine then available was the M-106 which was, unfortunately, a complete failure, not progressing further than bench testing. Construction of the RK-I was complete by 1940, but the aircraft remained un-flown in the workshop due to the unreliable engine.

On scetches a "razorback" model, and more conventional model was done.. i Choosed tomake a razorback model in RC. 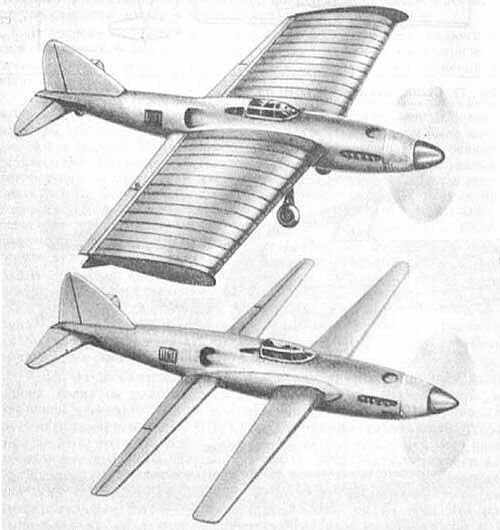 Ive started the work on a RC model 1050mm long.

here started with the telescopic wingpanels. Originally it was used 30 parts at each wing, im gonna use only 10 pvc panels total to reduce the complecity.

only one made, not fully completed, and never flyed.