Looking for rear firing air-to-air missile projects in this forum I found:

The Hawker P1184-16 proposal, with a tail gunner for the rear launched Taildog (being launched from a tube it has less disvantages compared to "normal" missiles like Sidewinder or R-73):

A hint to a proposal to replace the gun tail turret on Tu-22M with a rocket launcher:

The Grumman Design 143 Bushfire missile installed in the tail of the Martin P6M Seamaster:
https://www.secretprojects.co.uk/threads/martin-p6m-seamaster.334/post-294079

but nothing about the R-73 test launches from a Su-27, tough the info found in Internet are minimal: 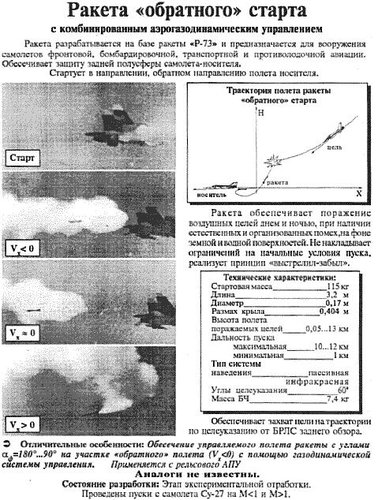 Reverse launch rocket with combined aerogasdynamic control
The missile is being developed on the basis of the R-73 missile and is intended for arming frontline, bomber, transport and anti-submarine aircraft. Provides protection for the rear hemisphere of the aircraft carrier.
Launches in the direction opposite to the flight direction of the carrier aircraft.
The missile ensures the destruction of air targets day and night, in the presence of natural and organized interference, against the background of the earth and water surfaces. Does not impose restrictions on the initial launch conditions, implements the "fire and forget" principle.

Provides target acquisition on a trajectory according to target designation from a rear-view radar.
Providing a controlled flight of a rocket with angles a f = 180 ° ... 90 ° in the "reverse" flight (V <0) using a gas-dynamic control system. It is used from the rail APS.
No analogues are known.
Development status: Stage of axial processing.
Launches from Su-27 aircraft to M <1 and M> 1 were carried out
Last edited: Aug 12, 2020
Share:
Facebook Twitter Reddit Pinterest Tumblr WhatsApp Email Share Link