Doppler filtering techniques in turn appeared on airborne radars, driven by the need to detect targets in the “clutter” of the ground, for interceptions at low altitude. Attempts to visualize the moving targets carried out on the CYRANO IVs, by working on the magnetron transmitter to improve its stability and by using coherent oscillators to copy and memorize at each recurrence the phase of the signals emitted, were not crowned with success. despite the efforts made.

It was again the need for export competitiveness that led Thomson - CSF to embark on the development of airborne pulse doppler radars, actions initiated and led by Jean Claude Marchais and Philippe Lacomme, under the direction of Henri Poinsard, who led to the development and production, from 1983, of the RDM radar: Multifunction Doppler Radar.

Of “classic” design, with low repetition frequency like the CYRANO, its innovation mainly concerned the choice of a coherent transmission-reception chain, based on a TWT transmitter, of peak and average power comparable to those of the Cyrano IV, compatible with good quality Doppler filtering. Interesting results could then be obtained: a range of a few tens of kilometers in the clutter, nevertheless limited by the spread of the spectrum of fixed echoes linked to the movement of the aircraft, specific to airborne radars.

The system aspect of this radar had also been particularly studied, in particular thanks to the use of digital techniques in the processing and exploitation of the signal, to develop its multi-purpose multi-target capacities: air - air and air - ground, by exploiting at better the flexibility of its TWT transmitter and the mobility of its inverted Cassegrain antenna.

The RDMs met with some success, in particular that of equipping the first MIRAGE 2000 squadron in Dijon in 1985, due to the unavailability of the RDI developed for the Air Force. There were 238 pieces produced, mainly for export.

However, the performance in airborne detection in the presence of ground clutter depends on the choice of pulse doppler radars with high repetition frequency, as proposed at ESD, Gérard Thouvenel. However, lulled by its previous successes, France did not immediately measure the lead taken by the Americans in this area. So it was without prior studies or experiments that the development of RDI: Pulse Doppler Radar, to use these principles, was launched at Thomson CSF, under an STTA contract.

These radars were produced in 133 copies, from 1986, solely for the needs of the Air Force.


Bretigny sur Orge, France—Dassault- Breguet will begin delivering Mirage 2000 fighters to the French air force in mid- 1982, equipped with a multimission ground attack radar because the originally specified air-superiority radar will not be available until 1985.

Revised plans call for an air-superiority retrofit program that will begin sometime in 1985, according to officials at the governmental flight test center here, where the aircraft is being evaluated.

Air force officials said the retrofit would be done on only some of the aircraft delivered before the new radar becomes available. Deliveries are scheduled to reach a rate of 2-4 a month, so the French air force could have at least 84 of the new fighters by the end of 1985.

Air defense versions of the fighter were to be equipped with a radar system optimized for air interception at all altitudes. Prime responsibility for the system, designated the RDI, was awarded to Thomson CSF in conjunction with Electronique Marcel Dassault.

Penetration versions of the Mirage 2000 were to receive a terrain-following radar called the Antilope 5. The Dassault subsidiary was given the lead role in development in cooperation with Thomson.

At about the time Thomson began work on the two requested systems, it also began to develop a third type of radar for the aircraft. This is a more general purpose system, now designated the RDM. RDM is designed for export to countries that do not want to dedicate such an aircraft to specific missions.

Although the Antilope 5 is expected to be ready on schedule in 1986, RDI development has slipped behind schedule. Rather than have no radar at all, the French air force therefore decided to accept the RDM for the first Mirage 2000 units. There are two reasons for delays in the RDI program: the need for more time than originally anticipated for certain phases of development and a French air force request six months ago for two improvements to the system.

In the first category, the main delay occurred during the testing phase. “We simply underestimated the time needed to see how the RDI would operate in a real environment and the time it would take to modify and optimize the processor to get rid of ground clutter in the look-down mode,” a Thomson official said.

All of these modifications involved software changes. “In general, there was a high volume of software activity and this took us longer than we originally anticipated,” the oflicial said.

Delays occurred while Thomson was trying to miniaturize the RDI signal processor. A few problems were encountered in applying an already developed technique of microwave frequency microelectronics. This last area caused more of a problem for the development of the RDM.

Thomson officials were pleased with the results of the first test flight of the RDI system on a Dassault-Breguet Falcon 20. In the air-to-air mode, “we obtained a performance that was within 10% of what we expected,” one company official said. "We now know that in principle, there was no mistake. We know it will be within specifications when we deliver it and we will not ask for any reduction in specs.”

In the second category, one modification the air force requested was an enhanced dogfight capability. This required adding a function that automatically disengages the antenna roll-stabilizing mechanism at close range.

This change relates to improvements in the missiles that will equip the Mirage 2000. Matra’s short-range Magic 550 is being fitted with a new seeker that greatly expands the missile’s attack envelope. Presently, it can only be fired from a position in a 180-deg. arc aft of the target. The new seeker expands this arc to 320 deg. Matra also has an improved semi-active seeker for its longer-range Super 530
missile.

A second requested modification is the addition of an automatic switching system between two modes. It allows the pilot to use the air to-ground mode while still searching for hostile aircraft in the air-to- air mode.

Company officials counter criticism of delays on their part by saying there always has been a gap between the delivery of the aircraft and the delivery of both the RDI and the Antilope 5. They also said the air force did not realize at the outset of the Mirage 2000 program that it would take longer to develop an entirely new radar than it would to develop the new airframe.

Asked why the company was able to deliver its private-venture, export RDM system more than two years before its joint-venture RDI radar, Thomson officials said the RDM essentially is an outgrowth of its Cyrano family of radars - RDM originally was called Cyrano 500.

RDI is an X-band pulse Doppler radar with a high pulse repetition frequency (AWSLST Dec. 4, 1978, p. 64). It has a digital signal processor and incorporates electronics to identify hostile aircraft (IFF).

RDM is a low PRF X-band system. Its inverted Cassegrain antenna system, derived from the Cyrano family of radars.

RDI and RDM have about the same head-on attack performance at high altitude, but the RDM has less capability at low altitude and less range in the lookdown mode. However, RDM has a range on the order of 50-60 naut. mi. compared to 10 naut. mi. for the RDI in the terrain mapping mode,” Thomson said.

Irrespective of whether the aircraft is equipped with the RDI, RDM or Antilope 5 system, radar information will be presented on a Penetron heads-down unit. “This will make the Mirage 2000 the first combat aircraft with a color display system,” a Thomson oflicial said. The company, which also builds the Mirage 2000 head-up display, is licensing Bendix to build the Penetron system in the U. S.
Last edited: Apr 22, 2021

The Vautour testbed for the RDM / Cyrano 500 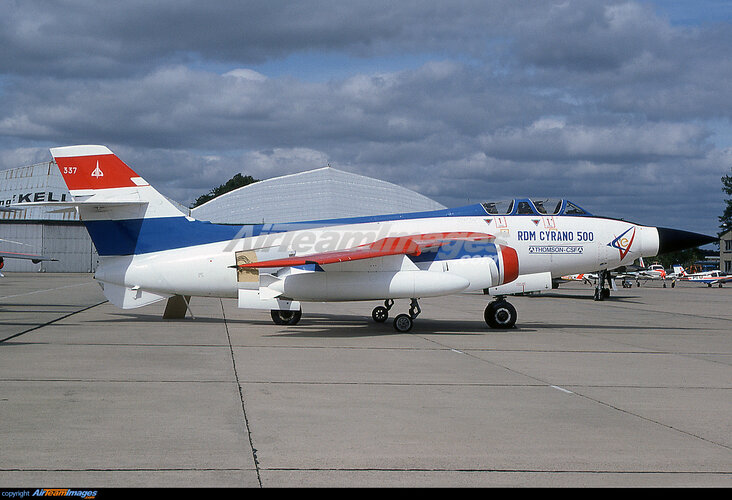 A korean blog article (with english translation) on Mirage 2000 with many photos (cockpit, engine, etc...)

An iranian page (?) with lots of stuff about RDM RDI RDY Family