here is a space helicopter Project,developed by Raytheon company.

Space Helicopter? Ah … high altitude helicopter maybe. And that publications art-work possibly was the inspiration for the Art Director of the East European SF film, First Spaceship On Venus 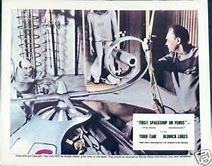 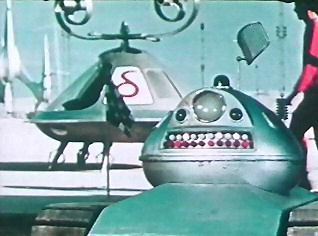 Not a helicopter of course, but spin stabilization. This is new and valuable information. Thank you. Of course there have been concepts put forth about drone aircraft flying through the Martian atmosphere.

edwest said:
Not a helicopter of course, but spin stabilization.
Click to expand...

The caption refers to the "mode original de propulsion", possibly to propel the rotor.

The significant bit of the story is evidently the use of a microwave beam to transfer energy from some source to the craft, by heating something on it, perhaps the focus of the central antenna, and use this to eject propellant.

On the other hand the rotor looks very aerodynamic, with odd control or trim tabs near the tips. Perhaps the thing is a planetary lander.
T

I think it's more a pseudo satellite using directed energy to sustain flight (instead of having a tether).

IMOHO, the energy is beamed on the underside (the circular base would hold a large enough antenna able to cope with beam dispersion which is in the order of 1+ meter at that altitude) and then the energy is converted into electricity to run both the engine and the radar system.
Last edited: Mar 28, 2020
A

This is beamed energy (microwave) for electric propulsion. Saw this illustration a long time ago. It’s legit.
A
Last edited: Thursday at 11:23 AM
E

How much energy are we talking? I had read that the power level required would cause too many problems in the atmosphere. 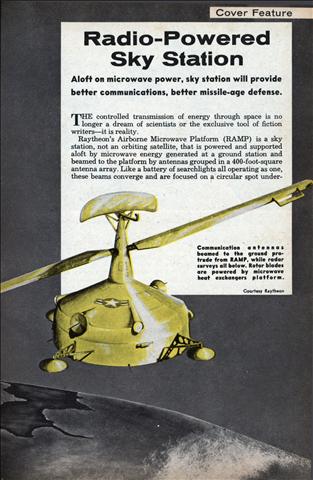 A loft on microwave power, sky station will provide better communications, better missile-age defense. THE controlled transmission of energy through space is no longer a dream of scientists or the exclusive tool of fiction writers—it is reality.
blog.modernmechanix.com

Amplitron tubes. Well, that explains everything.

Wireless Power Transfer is the second edition of a well received first book, which published in 2012. It represents the state-of-the-art at the time of writing, and addresses a unique subject of great international interest in terms of research. Most of the chapters are contributed by the main...
books.google.co.uk

While checking the NTRS, I found these technical reports which also talk about the RAMP and other beam-powered platform designs:

(Could the topic be renamed to Raytheon Airborne Microwave Platform (RAMP) please, or something like this to be more accurate?)

Attached here are pics of the "rectenna" demo helicopter from 1964, and the last one is a helicopter demo platform with self-positioning sensors from 1968:

William C. Brown was the lead engineer and scientist at Raytheon for this effort.
He was granted several patents for microwave powered space vehicles and microwave engines (microwave airbreathing engines).

I'll try to post a few screengrabs of these, being overbusy now.

This post will serve as a repository for listing William Brown's Raytheon patents (mostly filled in the US). He was granted many patents but only those filled in the late 1950s are related to directed-energy / microwave powered aerospace platforms and engines (helicopters-like vehicles, aircraft, space vehicles).