The Potez 660 was one of the contenders for the french B5 bomber program of the late 1930s.

Am I correct in assuming that it used the same design of wing as the Potez 661 and 662 transport aircraft?


The Potez-700 & 702 were twin engined heavy fighters,like
Mosquito in UK,the 700 was powered by HS 12Z and 702
was powered by radial Gnome-Rhone engines.Top speed
was 500 km/h and the Potez-700 was actually built and flown.

Dear Nick Summer, according to the June/July 2006 issue of Aviation Française Magazine, the Potez 661 and 662 did not share an identical wing design. The Potez 661 (span 22.5 metres) had a swept-back leading edge and straight trailing edge; DC-3 style. The Potez 662 (span 22.45 metres) had equal taper on both leading and trailing edges outboard of the engines to cater for the heavier Gnome-Rhône 14M engines, Lancaster style.

I cannot find any dimensions for the Potez 660 B5 bomber, but pictures in the same magazine article of the wooden mock-up would imply that it is a larger aircraft.

Thank you Justo. I've got the Dujin kit to build.

40 Potez 671 were ordered before the collapse of France.
S

Good to have this near perfect side view now, thanks !
S

Jemiba said:
C'est le Potez 660, n'est-ce pas ?
Good to have this near perfect side view now, thanks !
Click to expand...

Sure is. Interesting that the scan in the post you linked says "1934 competition" while the Docavia book from which I took this picture says 1936... ???


here is the Potez 41 was a large high-wing flying boat project,powered
by four engined,mounted each two engines in tandem above pylons,the
Potez 41 M was actually built as BN.5 five seat night bomber aircraft.


here is the Potez-XIV was a biplane postal aircraft,powered by one 270 hp Lo 8 Bd
engine,and its crew was one and accommodated two passengers.


a 3-view to Potez-35 recce and bomber aircraft,it was actually built.


here is a different nose shapes for Potez-66.

Hi all - Recently I was going through scans of old aviation magazines from the 1930s and came across this photo. I've been logging these photos by manufacturer, but I can't seem to find out who built the darn thing. I thought that I had a Doug Rolfe drawing (a good source of obscure aircraft) of it, but that turned out to be negative. Can anyone help me? ???
[/color][/size]Thanks in advance for your help.
[/color][/size]
[/color][/size]Regards,
[/color][/size]John Braungart

and the end of this plane !

And so it is! I knew that I had a copy in my Rolfe collection, I just didn't look hard enough. Thanks for your help, I really appreciate it.

Just found on http://www.aerostories.org/~aeroforums/forumhist/aff.php?nummsg=60026,
another photo of the Potez 41. Looks, as if it was taken during flight day or air show.


here is the Potez X drawing, as a Colonial aircraft.

I find it shocking that some people ambition to make informative websites yet are capable of producing such horrid retouched images as that (especially since the white areas in the picture are not from the original plan and do not add anything).

The following enhancement took me exactly 10 seconds to do, and it can be done in just ANY imaging software, even the cheapest!! Merely a play on lighting and contrast.

Thank you my dear Skyblazer. 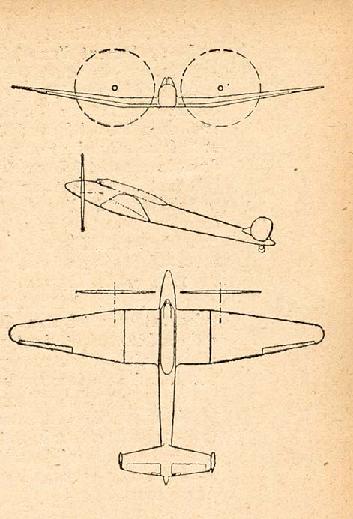 Hi! Potez 220.
http://www.airwar.ru/enc/spyww2/potez220.html
https://en.wikipedia.org/wiki/Potez_220
"On 6 February 1937, the French air ministry issued specification A.24 for a three-seat reconnaissance and army-cooperation aircraft. To meet this requirement, the nationalised Société Nationale de Constructions Aéronautiques du Nord (SNCAN), formed in January 1937 from ANF Les Mureaux, Potez, Chantiers Aéro-Maritimes de la Seine and parts of Breguet and Amiot, gave the task to the design team inherited from Les Mureaux. Their design, the Potez 220 was a twin-engined monoplane of all metal construction. The fuselage was an oval section monocoque, which accommodated the aircraft's crew of three, consisting of a pilot, a radio operator gunner and an observer, with a glazed gondola slung under the fuselage provided for the observer. "

https://en.wikipedia.org/wiki/Potez_630
"Potez 63.11Because the pilot needed to be seated above the observer, the fuselage was taller, which resulted in degraded top speed and manoeuvrability. As a result, the 63.11 proved very vulnerable, despite being protected with some armour and basic self-sealing coating over the fuel tanks. As a secondary light bomber capability was part of the requirements (though it was rarely if ever used), the fuselage accommodated a tiny bomb bay, carrying up to eight 10 kg-class bombs. This bomb bay was replaced by an additional fuel tank on late examples. Additionally, two 50 kg-class bombs could be carried on hardpoints under the inner wings. Frontal armament was originally one, then three MAC 1934s under the nose, and many 63.11s were equipped with the same additional guns in wing gondolas as the 631s.The first Potez 63.11 No.1 and second No.2 prototypes first flew in December 1938, and no less than 1,365 examples were on order in September 1939, of which 730 were delivered, making the 63.11 the most numerous variant of the family by far."

please notice that,this section is for prototypes and Projects only,Potez-63.11 was
a production version,the Aerospace section is suitable for that ?!.

Again and again every day,

what are those doing here ?,they were not a Projects or a Prototypes ,only one of them was a prototypes,and all people in the world know it,you can open a new topic for them in Aerospace
section,I want my dear PaulMM to solve this problem.

I think that this is the correct wing plan form of Potez 230.