Has anyone ever seen drawings (patent or 3-v) of the XR-1 helicopter? Numerous photos on the net, but no drawings. Did McDonnell use the XR-1 as the basis for their XHJD-1 design or is this one of those cases where two separate companies designed a similar aircraft simultaneously?

Platt-Lepage's design was taken over by McDonnell and perfected in the form of the Model 38/Model 65 Whirlaway design.

Thanks. This confirms my suspicions that these two designs looked too much alike to not have been connected.

McDonnell Aircraft Co. which had invested in Platt-LePage Aircraft, in exchange for having McDonnell personnel learn helicopter design, had bought the rights to the PL-9 twin-engine twin-rotor design that became the XHJD-1 Whirlaway the first twin engine helicopter to fly in the USA.
Click to expand...

From a very good Platt-Lepage page that can be found here:
http://www.plattlepageaircraft.com/2007/11/platt-lepage-aircraft-co-background.html

In a sense, yes.....the PL-9 / XHJD-1 grew out of the XR-1 layout, though they were in reality two different beasts. (Most Platt-LePage designs were lateral tandems, though they had a couple of intriguing single rotor designs)

McDonnell had an interest in PL-LP, they had engineers at PL-LP learning helicopter design, and a number of ex-PL-LP employees went to McDonnell when Platt-LePage closed down.

The story of Platt-LePage is very complicated, the Wikipedia mess is innaccurate, and Rene Francillon's very dated chapter in the McDonnell book is not very accurate. (The Anigrand model kit is a piece of junk, as well)
S

Platt-LePage Aircraft said:
The story of Platt-LePage is very complicated, the Wikipedia mess is innaccurate, and Rene Francillon's very dated chapter in the McDonnell book is very dated. (The Anigrand model kit is a piece of junk, as well)
Click to expand...

Purrrleeeeaase would you fill the gaps for us!!??

I'm working on it. (Someday I'll update my website, so the usual internet suspects can swipe my research ) 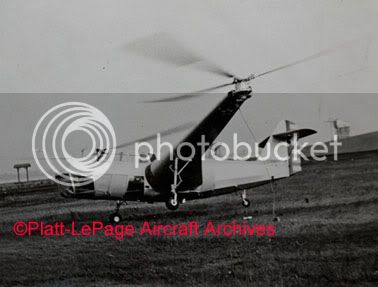 Assuming there was a single engine in the fuselage, the transmission, drive shafts and gear boxes must have been something to behold!

From what I have read it seems that PL-LP had worked out the lateral stability problems when the plug was pulled. Is this true?

fishjay said:
Assuming there was a single engine in the fuselage, the transmission, drive shafts and gear boxes must have been something to behold!
Click to expand...

Perhaps Bell could have taken some sound advice from Platt-Lepage survivors when they struggled with that problem on the V-22?? :

fishjay said:
Assuming there was a single engine in the fuselage, the transmission, drive shafts and gear boxes must have been something to behold!

From what I have read it seems that PL-LP had worked out the lateral stability problems when the plug was pulled. Is this true?

Haviland Platt and his team solved a nasty drive shaft failure problem with the Bell P-39 Airacobra, Haviland Platt, also laid out the cross shafting set up in the twin engined XHJD-1 Whirlaway, to transfer power in case of an a failure of one of the engines.


The stability issues were partially solved, unfortunately money and time ran out.

It would be nice to see the XR-1 fully re-assembled and displayed at Udvar-Hazy, it's in pretty decent shape.
S

Platt-LePage Aircraft said:
It would be nice to see the XR-1 fully re-assembled and displayed at Udvar-Hazy, it's in pretty decent shape.
Click to expand...

A little rarity to enjoy.

What might have been the PL-12 fuselage, with the XR-1A and XR-1 in the Platt-LePage shop, just after the end of WWII. 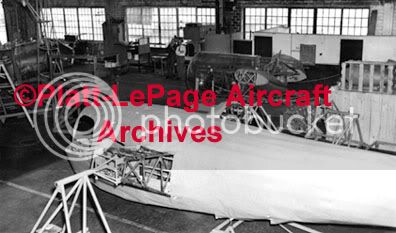 Brilliant! So Platt-Lepage actually had ANOTHER type in progress at the same time as the XR-1/XR-1A prototypes? Was this to be a civil version of these? Or something different? It's hard to tell proportions exactly in such a small picture, but it seems to be a little smaller than the PL-3...

There were a number of projects that had quite a bit of engineering work carried out, plus there were parts stockpiled to build a small number of civil helicopters, however events took over that caused everything to be shut down almost overnight.

(One interview I did with an ex-PL-LP employee, mentioned that they were working on rotary-wing projects literally one day, and the company that took over PL-LP, had them working on non-aircraft engineering the next day)

Others jumped over to McDonnell to work on the XHJD-1 project, but McDonnell wasn't able to move things along fast enough with Frank Piasecki taking the tandem helicopter market. (Frank Piasecki bought the XR-1A in 1947)

What you could have bought for fifteen hundred dollars in 1947. (Frank Piasecki bought it)

They had a great design, they had the first aircraft to be purchased in the "R- for Rotary" class, and on top of that it looked just GREAT... Why on Earth did they close business and sell the design to McDonnell, who obviously didn't do much with it afterwards? ???

Platt-LePage ran out of cash, and the company was liquidated, there are a couple of other things that happened that accelerated their demise.

There was just no chance of any further orders from the military, so they ran out of options and time, right as the postwar aviation boom went bust.

They sold the PL-9 design to McDonnell during the war, they simply did not have the means to build the design without a military contract, which was not going to happen due to the difficulties with the XR-1 program.

McDonnell unfortunately took too long to develop the XHJD-1, so the lateral tandem became a dead issue with the military.

Unfortunately most of the story of the XR-1A at HAT is a load of B.S., that came from ex test pilot Lou Leavitt.
Platt-LePage and HAT never were able to carry out the actual deal for what would have been done with the XR-1A airframe.

Lou Leavitt oversaw the reassembly of the XR-1A, the story he told about how HAT obtained the airframe differs greatly from the actual contract papers from Platt-LePage. (I have all the papers)

Shortly there after, HAT went bankrupt, and Frank Piasecki bought the XR-1A for sentimental reasons for $1500. at HAT's bankruptcy sale. Pi paid Lou Leavit to fly the XR-1A from Camdem NJ, to Piasecki Helicopter. (You can see the flight on youtube)

Frank kept the XR-1A for many years, bringing it Piasecki Aircraft in Essington PA, after it's use as a mock up for the PA2 "Ring-Wing", his works manager scrapped the airframe without telling Frank, as Piasecki had intended to keep the old helicopter in memory of his days at Platt-LePage. (Frank kept a lot of helicopter stuff)

XR-1A lift off at Camden NJ 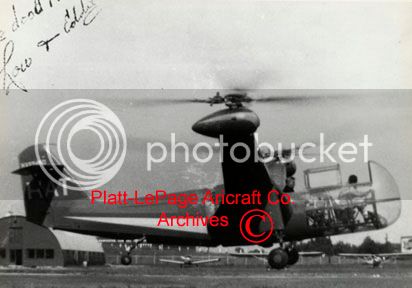 Thanks for the precious input as usual!

Basically an artists concept, that was also used a schematic for one of Haviland H. Platt's patents. I'll post an original photo of the art work sometime.

Yes, I have drawings and the engineering data for the PL-9 and PL-14, and all the other designs...

Platt-LePage Aircraft said:
Yes, I have drawings and the engineering data for the PL-9 and PL-14, and all the other designs...
Click to expand...

Please can you send them here,and thanks.

The concept drawing of the PL-13 Helicopter, also used as a schematic for one of Haviland Platt's patents for a twin engine rotor drive system.

It was mainly used for publicity as a possible "this is coming postwar concept", and was the only image of a Platt-LePage type machine allowed to be published at the time.

The Air Corps prohibited Platt-LePage from issuing any photos of their XR-1/XR-1A helicopters for publicity use, until the summer of '44 when the XR-1A was delivered to Wright Field. (Which is why there were so few photos published during WWII) Excellent Platt-LePage,we hope to get all his work.

hesham said:
Excellent Platt-LePage,we hope to get all his work.
Click to expand...

I hope to see all PL list,also this strange Project for Haviland Hull Platt;

Vertigiro c.1935 - Design for a helicopter having a single rotor with movable vanes in the rotor downwash for anti-torque control. Interestingly, an article by W Laurence LePage in the Oct 1936 Journal of the Franklin Institute was the first summary of Rotary Wing progress. Platt's patent #2,074,805 of the control system shows a three-view drawing of a multi-seat version, and at some point there was collaboration between Platt and LePage on this design that apparently never went beyond the model stage.

Aerofiles put that up from an email I sent them many, many, years ago.

The model on top that Dr. LePage is holding... There were a couple of articles from 1936 where Dr. LePage talked about this concept.

Haviland Platt had a pair of novel single rotor helicopter designs during WW-2 that had no tail rotor, which used a counter balance vane, but the U.S. govt. would not allow Platt-LePage to divert any resources from the XR-1 / XR-1A / YR-1A program.

Thank you for the Info Platt-LePage,

hesham said:
Thank you for the Info Platt-LePage,

I hope to know more about those Projects.

here is a strange ten-passenger transport autogiro Project of 1933.

The PL-5 was the XR-1A.
The PL-6 and PL-10 were design studies for a single rotor helicopter with no tail rotor.
The PL-10 Utility/Liaison Helicopter came very close to being built, but the military would not allow Platt-LePage to divert any construction work, or materials from the XR-1A / YR-1A project.

The LePage LTA-1 Autogiro predated Dr. LePage's longtime collaboration with Haviland Platt.
Laurence LePage laid out a design study for a large sized autogiro, (For its time) with the depth of the economic depression going on in the early 1930s, there was no chance of this ever being built.

Many thanks to you my dear Platt-LePage,