on the site " Forked Ghosts ", I´ve found a pic from the P.36. There also speak about the mostly like projects P.35 and P.37.
Any pics, drawings or technical data?

BSP: Fighters & Bombers 1935-1950 mentions the Percival P.26 project for an engine testbed dated 1938.
No other fighter or bomber designs are noted, did they design anything else during the war? Or is it a case of lost archives?
S

http://www.secretprojects.co.uk/forum/index.php/topic,1338.0.html
but also communications and training aircraft, not to be despised. (Proctor etc)

I seem to remember a proposal to fit Percival Mew Gull racers with a couple of machine guns as a stopgap emergency fighter, I have no references though.

Yes, it would likely be the "P.32...projected ground attack-anti invasion-variant (1940) of the Mew Gull" as opposed to the much more powerful P.33 competitor to the Miles M.20. Perhaps the Mew Gull thread ought to be folded into this one on Percival projects in general?
L

A.A. Bage,the Percival chief designer prepared a project for adapting
the existing 205 h.p. Gipsy Six Series II powered Mew Gulls for anti-invasion
ground-attack defence.
Designated P.32AA, the superb little racers were to be armed each with a pair
of .303 Vickers machine guns at a loaded weihgt of 2,400lb ,with which
a top speed of 210 m.p.h. was expected.

Now , we only have to find an artist impression or G.A drawing...

Maveric said:
on the site " Forked Ghosts ", I´ve found a pic from the P.36. There also speak about the mostly like projects P.35 and P.37.
Any pics, drawings or technical data?
Click to expand...

In John Silvester's book ('Percival & Hunting Aircraft') there are three photographs of a model of the four engined version of what is, it appears, the P.36 project. It also mentions that there was an article on this project in the February 1943 (?) issue of The Aeroplane.
L

Quick question, what is/who makes a Bombardier engine and what configuration is it? My only knowledge of the name is Bombardier the airframe manufacturer of too recent vintage to have built a powerplant for a Percival design.

nuuumannn said:
Quick question, what is/who makes a Bombardier engine and what configuration is it? My only knowledge of the name is Bombardier the airframe manufacturer of too recent vintage to have built a powerplant for a Percival design.
Click to expand...

The Bombardier was designed and built by Blackburn, it was a 4-cylinder inverted inline engine, a post-war replacement for the Cirrus. Was used in the Auster AOP.9 and one was trialled in a Saro Skeeter. Never seems to have been particularly successful.
There was also a planned engine - the Grenadier - which stayed on the drawing board.
N

Ah, thank you, Hood. Based on the original Blackburn Cirrus Minor, which was originally derived from Frank Halford's Airdisco Cirrus, half a war surplus Renault V8 and the invention of the inverted four that became so popular between the wars.

Anybody know anything of the Percival Peewit? 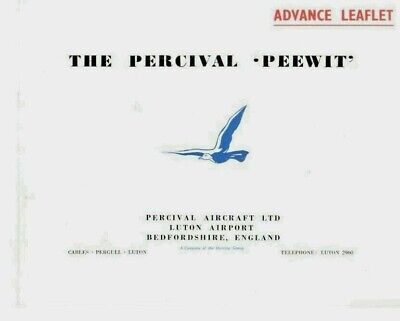 Find many great new & used options and get the best deals for THE PERCIVAL PEEWIT - PUBLICITY BROCHURE - PERCIVAL AIRCRAFT LTD, LUTON AIRPORT at the best online prices at eBay! Free delivery for many products!
www.ebay.co.uk
J

By the time of the Munich Crisis, it was unclear to the British authorities if the production of the new monoplane Hawker Hurricane and Supermarine Spitfire fighters could be accelerated sufficiently to equip the 123 Squadrons that the Fighter Command required for the defence of the British Islands.

During the critical days of 1940 the 'Panic Effect' boosted numerous interim solutions to increase the number of fighters available: A.A. Bage, the Percival chief designer, proposed to build a version of the Mew Gull armed with two 0.303 in Vickers Mk.II machine guns. The projected light fighter, called Percival P.32 AA, would have 7.62 m wingspan, 6.57 m overall length and 1,087 kg maximum weight. But it was rejected in favour of the Miles M.24, the single-seat version of the Miles Master.

The projected fighter Percival P.33 AB, based on the aerodynamic configuration of the Mew Gull racer that competed for the Merlin XX engine, was also cancelled. It would have been a 556 km/h fighter armed with four Browning, with 12.24 m wingspan, 9.2 m overall length and 2,848 kg maximum weight.