While perusing the Nuclear Weapons Archive - http://nuclearweaponarchive.org/Usa/Weapons/Allbombs.html - I was looking at the various yield to weights of the warheads. It is difficult to ascertain the best warhead in terms of yield to weight as the weight category seems to include the bomb body or reentry vehicle weight.

So can the learned members of SP point me to research papers. books or to wherever on the web as I am interested in what the theoretical weigh/yield limits are for fusion weapons.

Thanks to anyone that can help.

"According to Dr. Theodore Taylor (physicist and former weapons designer), the practical limit for nuclear weapon yield to weight ratio is about 6 Kt/kg. Using the deployed weapon weight (10,670 lb), and a yield of 25 Mt, the Mk-41 achieved 5.2 Kt/kg. If we look at the test devices fired in Hardtack I however (see below), which lack such weighty and in principle unnecessary things as parachutes, we see weights 8,752 - 9,723 lb. Taylor's maximum achievable yield-to-weight ratio of 6 Kt/kg corresponds to a device weight of 9,190 lb; well within the weight range of these devices. "

the Tsar Bomba aka Vanya, the biggies nuke of all time with 50 MT
it is three-stage Teller-Ulam design with mass of 27000 kg or 60000 lbs
and was a prototype for a 100 MT nuke
but in order to reduce the massive fallout after the test
the second stage uranium-238 was replace with lead
achievable yield-to-weight ratio is 1.85 Kt/kg (50MT) or 3.7 Kt/kg (100MT)

A two stage ICBM called UR-500 was build for it, but never used therefor it became the Proton rocket

Does anyone have a copy of the Scientific America article April 1987. Vol. 256, No. 4. pages 30-39 on "Third Generation Nuclear Weapons?" and can scan and post it? I would be eternally grateful.

bobbymike said:
Does anyone have a copy of the Scientific America article April 1987. Vol. 256, No. 4. pages 30-39 on "Third Generation Nuclear Weapons?" and can scan and post it? I would be eternally grateful.
Click to expand...

I'll look when I get home. There's actually a book/paper out there called "4th Generation Nuclear Weapons" as well.

bobbymike said:
Does anyone have a copy of the Scientific America article April 1987. Vol. 256, No. 4. pages 30-39 on "Third Generation Nuclear Weapons?" and can scan and post it? I would be eternally grateful.
Click to expand...

I'll look when I get home. There's actually a book/paper out there called "4th Generation Nuclear Weapons" as well.
Click to expand...

I have a photocopy of a Taylor SciAm paper on either 3rd or 4th gen nukes in my Orion files. I'll look it up.

You guys are the best, thanks ;D sferrin I have the 4th Generations publications, very interesting stuff. When I read it I just hoped the US was partaking in the necessary research to insure we remained on the cutting edge on all things nuclear.

Status of Los Alamos Nuke Experiments Uncertain Amid Wildfire Thursday, June 30, 2011 Los Alamos National Laboratory representatives said they may need days to better understand how the New Mexico site's closure due to a nearby wildfire has affected nuclear-weapon and other experiments taking place there, the Associated Press reported on Thursday (see GSN, June 29).
Personnel would work to investigate the status of various research efforts as soon as the Los Alamos complex reopens, laboratory director Charles McMillan said on Wednesday. The facility has been sealed since Monday, following an evacuation of the town of Los Alamos and other nearby areas.
Roughly 10,000 tests had to be shut down when the laboratory was closed, officials said.
"We have a range of projects, some of them have shorter time deliverable, some of them are years to decades," McMillan said.
------------------------------------------------------
Bolding mine - now this "sounds" positive (not the shutdown of course) as if they are still doing cutting edge nuclear weapons research or at least I hope that is what they are doing.

Quite an exhaustive 2013 article on the topic: http://blog.nuclearsecrecy.com/2013/12/23/kilotons-per-kilogram 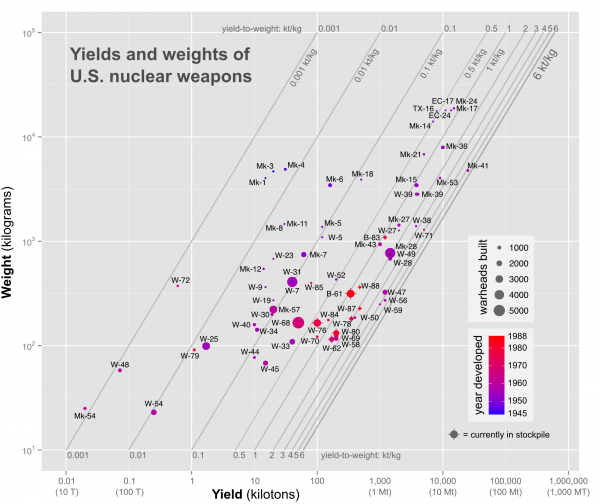 Why do the (relatively) new and shiny W88s underperform the old and creaky W47 Polaris warheads by such a wide margin? W47Y2 (in RV) had a yield in the 1.2 megaton range and weighed 350 kg; W88 has a 500kt yield and weighs somewhat more (with RV).

Chuck Hansen claims that LLNL once tested a 100kt warhead (PEBBLE) in a 30-kg test package (this would make a killer A2A missile warhead or atomic demolition device).

W88 is apparently a much more compact warhead, is denser, and is conical in shape. It is also much more reliable (theoretically), houses a radar altimeter, and is hardened against nuclear effects. Is it just me, or did the ballistic, explosive sensitivity, and hardening improvements really take that much performance off the warhead?
You must log in or register to reply here.
Share:
Facebook Twitter Reddit Pinterest Tumblr WhatsApp Email Link
Top