hello guys Ive seen a picture of a to me unknown type trainer jet,it was displayed in mock-up form.
Its an entirely black trainer jet with the Cyrillic text CP-10 on its tail,its surtenly not the Yak-130
could some one tell me more about this unknown trainer jet? it was shown on the site from Paralay.
I'm very curious about this very interesting trainer project
best regards T-50

I believe, this is another dead end project from the beginning in current conditions
http://sat-kb.ru/projects/ - the same guys who restored Yak-30 and Yak-32 to flight condition

Nice looking but the FSW makes me doubt if it will get produced.

I can't recall the name of it, but wasn't there a similar American project of a few years back?
T

hello guys i want to thank you for the info and the pics,I dint know that this little company was responsible for the replicas of the Yak-30.
they did a nice piece of work,i think too that this trainer is going a success because the Russian airforce has choose the Yak-130 as their next generation trainer.
cheers T-50

Insert Quote I can't recall the name of it, but wasn't there a similar American project of a few years back?
Click to expand...

You mean this beauty?

I agree that this is the death project. With the hell of a competitors like Yak-130, Aermacchi M346 or T-50 Golden Eagle, even the MAKO HEAT trainer, supported by the giant EADS doesn't have much chances to be realized.

Photos from MAKS 2009 by Zmey Smirnoff

And why would that be?


vajt said:
Nice looking but the FSW makes me doubt if it will get produced.

frank said:
And why would that be?


vajt said:
Nice looking but the FSW makes me doubt if it will get produced.

Unfortunately I've seen a trend where aircraft that do not conform to the norm, in this case the FSW aspect, either get modified or are found to be a higher risk/expense to build and ultimately get dropped. The new pictures added does make it look like a nice aircraft and I hope it gets produced but we'll see what happens.

Would be interesting if it gets produced and then it's decided to make a larger variant offering a multi-role FSW fighter.

Gregory, thanks for the photos. I am fascinated by jet trainers, and I printed up your photos for reference to build a model "someday".

S-52 was a jet trainer proposal from the 1997-2001 timeframe, moving force behind this project was Andrey Manzheliy, who was working under the direction of Mikhail Simonov and Boris Rakitin. After 2001 project didn't gain momentum, and, as a result, Manzheliy has moved to SAP, where continues work on what now being called SR-10.

A new Russian trainer jet took to the skies for the first time last week in the shape of the SR-10 developed by KB SAT design bureau in Moscow. The remarkable thing about the shape is the 10 degree forward swept wing.

The SR-10 was originally a competitor for the new initital flight trainer by the Russian DOSAAF flying academy. That competition was won by the Yak-152 and now the SR-10’s desginers are trying to go ahead under their own steam. The aircraft is powered by an AI-25TL turbofan, the same engine that drives the Aero Vodochody L-39 Albatros.

The first flight took place from Vorotynsk airport near Kaluga. An aerobatics variant is also to be developed.

PDF version of presentation from 2009.

Anyone got more information on this bird? Looks pretty cool!
N

Damn! That looks like a sweet little hotrod! My only qualm is that a forward swept wing means higher cost and it's highly unlikely that it's Vmax would be above Mach. But I think as long as they can hit the 900 km/h+ in level flight target (as said on the slides from 2010), they've got a little gem of an airplane. Even if it's Russian, it'll still be pretty expensive for civilian owners though. Can't help but think it's rear planform looks an awful lot like the BD-10. Of course it's an aircraft in the same overall class.

Good on these guys for actually getting the job done and the plane flying!

Very cool looking. I'm not sure i understand why they elected to use a FSW planform.
And yes, i know the traditionally quoted advantages of FSW.
Does anyone know what the manufacturer is claiming is the reason?

Well, the designer is ex-Sukhoi and worked on various FSW designs then. It was in vogue. This project was originally the Sukhoi S-52 trainer.

I can see FSW in passenger airplanes, in order to get the wing structure to go inside the fuselage behind the cabin, but that reason is not valid for a trainer.
But yeah, if i had studied extensively a certain layout, i would definitely be more inclined to use it in following projects.
N

Insert Quote I can't recall the name of it, but wasn't there a similar American project of a few years back?
Click to expand...

You mean this beauty?

Or maybe you were thinking of the X-29 from Grumman?

AeroFranz said:
Very cool looking. I'm not sure i understand why they elected to use a FSW planform.
And yes, i know the traditionally quoted advantages of FSW.
Does anyone know what the manufacturer is claiming is the reason?
Click to expand...

No idea what they are claiming - but I have a couple of guesses. It could be that they see a supermaneuverable trainer as having a niche as a result of new trends (e.g. the PAK-FA) and the FSW works better for the aircraft size. If the single engined design is cheaper to operate it might be somewhat competitive with the Yak-130.

The other possibility is that producing a small batch of trainers is a way to recover some of the costs of a project that is mainly aimed at validating more modern FSW manufacturing techniques. The smaller wing would be easier to manufacture and a trainer is less risky than trying to redevelop the technology for a major airliner project. If this is the case (i.e. it is a LRP/Demonstrator for the financial feasibility of future FSW designs) - it would make the SR-10 truly the baby of the S-37 Berkut program.

There was a rumour of an LMFS/LFI/LFS class FSW design being discussed a few years ago. Maybe we shouldn't dismiss it entirely. There might be an R&D effort exploring such ideas.

Anyone got more information on this bird? Looks pretty cool!
Click to expand...

That was day 3 of flight tests. Pretty impressive.
R

Judging by the weight and internal volume, she is purely a trainer with no secondary weapons capability. She looks barely big enough to carry a pair of pilots and 200 kg of fuel. Insufficient internal volume for significant internal avionics (beyond basic navigation instruments.) The prototype has no external hard-points for slinging external fuel tanks or weapons.
Great for a large Air Force that flies thousands of training hours per year.
Great for sales to third world countries that want the "prestige" of jets in their Air Force. Great for scaring neighbouring politicians, but unlikely to scare well-educated mitary officers.
Superb for sales to neighbouring nations with "questionable" political stability.

There's UCAV design from SAT, based on SR-10, with internal weapon bay.

Is the SR-10 an exact replica of the much older S-52 design?, or are there any differences between this two designs? Apart from this are there any available photos/blueprints of the S-52 design it-self?!

No internal weapon bay visible on the drawing so far.

[...]In addition to the advanced trainer version, SAT is also working on an UCAV variant, dubbed "AR-10 Argument". According to SAT, the AR-10 UCAV would features increased capabilities in addition to its weapon payload, such as a 900 km/h maximum speed and an operational range of up to 1,600 km/h. It should be powered by a single AL-55 jet engine. Technical drawing unveiled at MAKS 2017 suggests that the AR-10 could be fitted with at least two missiles.[...]
Click to expand... 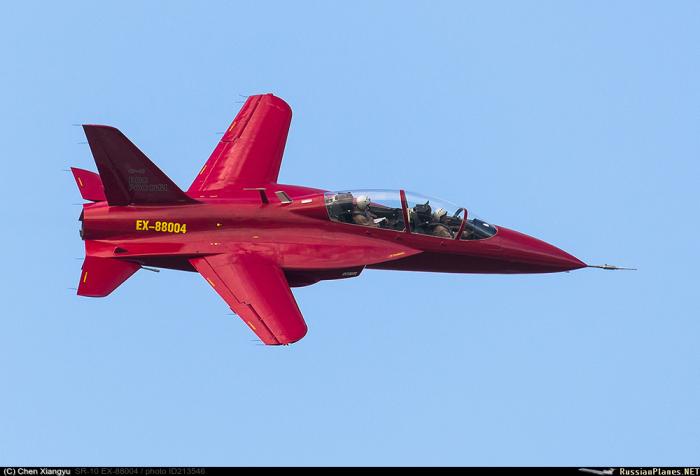 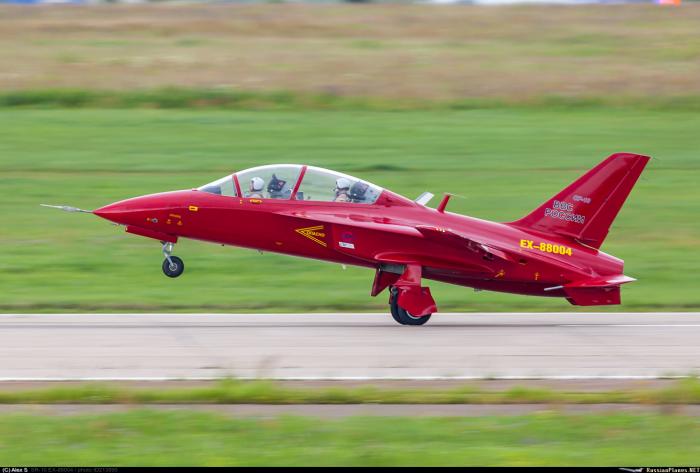 Who's the intended customer?

Flying Sorcerer said:
Who's the intended customer?
Click to expand...

The article said that they were hoping Russia would buy it as a third trainer (i.e. intermediate). I'm pretty sure they'd sell it to anyone though. 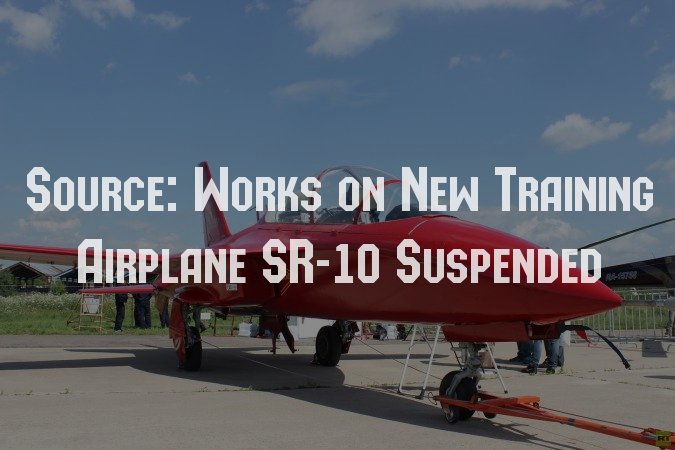 So far, the Russian government has not allocated funds for batch production of the future training airplane SR-10, being developed by Modern Aircraft Technologies (MAT) for the Russian Airspace Force. SR-10 proved itself at the last flight trials though, test pilot Viktor Korolev told...
mil.today

The Russian non-governmental media group Mil.Press has announced that the “Modern Aviation Technologies” is suspended development of its SR-10 forward-swept wing jet trainer aircraft. Test pilot of MAT, Viktor Korolev has told the Mil.Press that the Russian government has not appropriated funds...

The entire project flew totally below my radar.

At some point they added ventral strakes to the design. 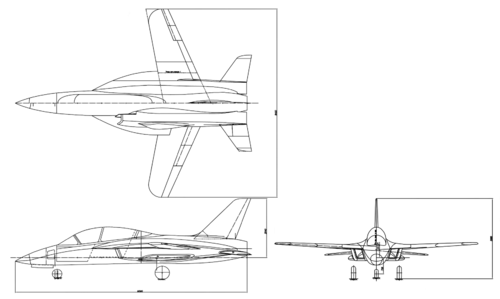