but main question is how economic will be this plane will be for commercial use ?
It feature allot new stuff like Ramjets Rocket engine and retracting jet engines
stuff that need complete new maintenance infrastructure tools and approach for Airliners Maintenance crews
I

A jet takes off, then a rocket ignites throwing it past the required ramjet ignition speed.

I reckon the ramjet and turbine will be in one pod not needing retraction, and the rocket will be a larger, single unit, so from behind the power plants will look like a pyramid.

This is an old solution to an old problem (e.g ramjet thrust chasm), see SA-2S in the link

Phase 3 began with an evaluation of alternatives to the modified B-58 as a launch platform for VS-4. The first alternative consisted of attaching the second stage of a SCOUT rocket to the underside of VSF-4 and air-launching the parasite/rocket combination from a B-52. The Lockheed D-21 drone would later be launched in this manner. SCOUT, an acronym for Solid Controlled Orbital Utility Test, was the first US-built solid-fuel rocket capable of launching a satellite into a 500-mile orbit. The second alternative consisted of ground launching VSF-4 atop the first stage of an LGM-30 Minuteman I missile. The Minuteman I was a three-stage, solid rocket-powered intercontinental ballistic missile designed to deliver nuclear warheads.
These launching alternatives led to a variable-sweep, self-accelerator version of VSF-4, which was called Configuration SA-2S. This configuration was an enlarged version of VSF-4 powered by two Pratt & Whitney J52 turbojet engines for takeoff and cruise. A solid rocket, the first stage from a SCOUT rocket, was used to accelerate the aircraft to supersonic speeds necessary to start its two Marquardt ramjet engines
SA-2S had a takeoff weight of 92,000 pounds, a pre-zone range of 2,100 nautical miles, a zone range of 4,000 nautical miles, and a post-zone range of 2,700 nautical miles. It cruised at Mach 5 and 95,000 feet. Fuel weight was 37,600 pounds. The aircraft was 87.5 feet long and 16.7 feet tall. The wingspan was 35.0 feet with the wings swept for high-speed flight. Wingspan was 60.3 feet with the wings extended for low-speed flight. Several turbojets and booster rockets, some under development, were studied as alternative powerplants to improve performance." 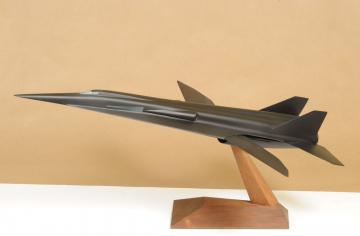 You do realise that it is the 'Silly Season' in Britain? Watch out for more articles like this, usually of the 'Australia in two hours' type.

Here is the first page of the patent:

I really wonder why the space guys from ex-Astrium always doing aircraft designs!

Well as it is silly season...

With the wings un-swept, an SA-2S configuration 'somewhat resembles' a F-111? 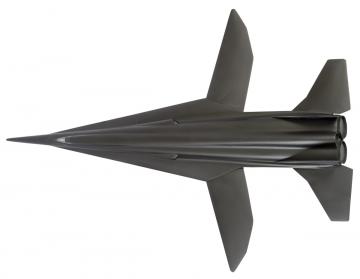 USAF might, for example try and camouflage an SA-2S by flying with F-111 chase planes... of course this ruse would be totally screwed if the SA-2S wings were stuck in the swept position.

I once heard a rumour about an 'F-111' having to refuel with its wings swept...

Aye, so have I, loads of times, but I've never found any evidence to back it up, in fact the very idea was diss'd by an F-111 pilot. You'd need to have a KC-135 going downhill very fast to do it. You certainly wouldn't do it for a laugh.

Anything is possible, but considering that all the high lift devices on a F-111 are locked when the wings are swept, would you want to be bringing on tons of fuel when flying on the edge of the flight envelope and your CoG is changing as you do it? A bit of a handful.

I'd be interested in seeing any evidence of this.

Ah, it's deja vu all over again (no, I won't post that clip)

The Daily Fail just wrote on this. I won't even dignify that with a link.